MLB teams are wrapping up the interminable Spring Training schedules this week in which they’ve spent copious amounts of times evaluating their rosters. Despite that, some teams are going to realize that there rosters have some big ol’ holes in them. With Opening Day just around the corner, it is time for some teams to consider some last minute trade options.

Who’s available? Who needs what? Let’s find out.

Cole Hamels
Big name ace-type pitchers don’t usually get hastily dealt the week before the season starts but Hamels could prove to be the exception because the Phillies are going to be terrible. Even if they keep Hamels, they will be terrible, so they should just give in to their impending awfulness and move Hamels now. He’d fetch a major return and save the Phils a bunch of money. Several teams looked like they came close to completing a deal for Hamels this winter, but nobody managed to convince Ruben Amaro to pull the trigger. Now that some injuries have begun to pile up for certain contenders, perhaps a team will give in to Ruben’s demands and finally pry Hamels loose.
POTENTIAL DESTINATIONS: Dodgers, Red Sox, Rangers, Yankees, Padres

Jonathan Papelbon
Yeah, we are just going to go ahead and get all of the Phillies trade pieces out of the way up front. In case I didn’t make the point enough in the Hamels commentary, the Phillies are going to be terrible. Terrible teams don’t need expensive closers. Terrible teams really don’t need expensive closers when they have viable young relievers like Ken Giles to step into the role. Ruben Amaro has been trying to move Paps since the trade deadline and surely would still love to do so, but his contract continues to be a bit prohibitive. However, there are currently more than a few teams who have shaky situations at the end of games right now, so they might be willing to take on all or some of Papelbon’s deal.
POTENTIAL DESTINATIONS: Blue Jays, Dodgers, Tigers, Brewers 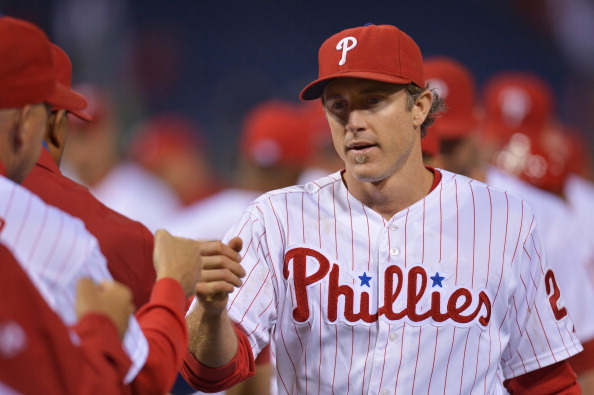 PHILADELPHIA, PA – SEPTEMBER 17: Chase Utley #26 of the Philadelphia Phillies celebrates with teammates after a win over the the Miami Marlins 6-4 at Citizens Bank Park on September 17, 2013 in Philadelphia, Pennsylvania. (Photo by Drew Hallowell/Getty Images)

Chase Utley
Take our second baseman, please! In the ongoing fire sale that isn’t, the Phillies have let it be known that any team willing to take on his contract could get Utley on the cheap… you know, except for the contract part which is actually quite expensive and has some complicated and expensive vesting options. Oh, and Utley has given no indication that he has any interest in waiving his no-trade clause. Aside from all that, Utley would be a nice addition for teams that need help at second base, of which there are more than f ew.
POTENTIAL DESTINATIONS: Angels, White Sox, Angels, Blue Jays, Angels, Orioles, but seriously the Angels

Dillon Gee
How cute, the Mets have officially named Dillon Gee to their rotation even though they have been trying to trade him pretty much since the day the 2014 season ended. Now they think they can act like they are committed to him. Sure, losing Zach Wheeler hurts their rotation depth, but with Syndegaard and Montero waiting in the wings, they still don’t really need Gee. For teams needing rotation help who aren’t in the Cole Hamels tax bracket, Gee is a perfectly suitable back-of-the-rotation starter who can come in and soak up innings.
POTENTIAL DESTINATIONS: Dodgers, Rangers, Yankees, Angels, Blue Jays

Andre Ethier
Stop me if you’ve heard this one before, but the Dodgers are trying to dump Andre Ethier and his salary. Oh? You have heard it before. Well, the Dodgers are going to try it again, only this time Ned Colletti isn’t doing the trading, so maybe they will have better luck. As always, his contract is an issue, but this Dodgers regime seems to be more willing to eat money in order to move an unwanted asset. Ethier isn’t entirely useless at this point, but he’s really just a platoon player with limited defensive ability at this point.
POTENTIAL DESTINATIONS: Orioles, Rangers

Carlos Quentin
If you think that your team might be interested in Ethier, but would rather have someone who swings right-handed, then Carlos Quentin is the solution for you! The Padres are acting like they will move Quentin to first base as part of a platoon, but there are just so many things wrong with that idea. It makes much more sense for them to trade the injury-prone slugger to a team that can use him at DH where he might actually be productive instead of being part of the cluttered Padres outfield.
POTENTIAL DESTINATIONS: Orioles, Indians, Angels, Rangers, A’s 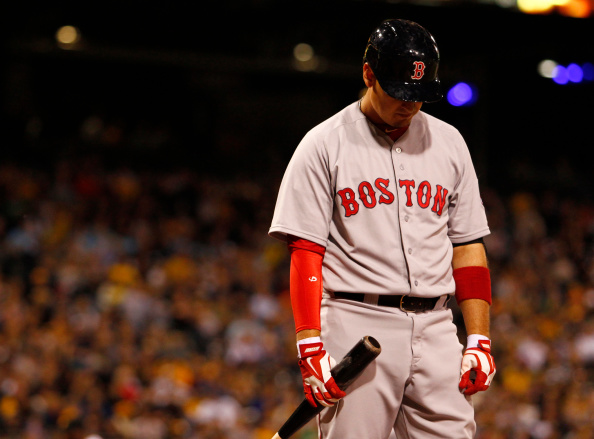 PITTSBURGH, PA – SEPTEMBER 18: Allen Craig #5 of the Boston Red Sox strikes out in the sixth to end the inning during inter-league play against the Pittsburgh Pirates at PNC Park on September 18, 2014 in Pittsburgh, Pennsylvania. (Photo by Justin K. Aller/Getty Images)

Shane Victorino/Allen Craig
Speaking of cluttered outfields, either Allen Craig or Shane Victorino is going to have to go in Boston so that Mookie Betts and Rusney Castillo can both play full-time or close to it. Victorino is probably who the Sox would rather move because of his salary and age, but that is what will also make him harder to move. Still, a team that values defense and grit could take a liking to him. The more appealing piece though is Craig because he has positional versatility and is a season removed from looking like an All-Star bat. Just about any team would be willing to roll the dice on him as a reclamation project, for the right price.
POTENTIAL DESTINATIONS: Pretty much most teams

Wilin Rosario
The Rockies have made a real mess of Wilin Rosario. They’ve lost faith in him as a backstop but haven’t really committed to moving him to first base or the outfield. He’s experimented at other positions, but he doesn’t have any obvious route to playing time in Colorado, which is a shame because of his offensive potential. If a team is able to stomach his poor receiving skills or simply commit to moving him to another position full-time, Rosario looks like a great buy low opportunity. Of course, these are the Rockies we are talking about, so they probably aren’t sure if they are even willing to move Rosario despite not having any other plans for him. As always, their plan is that there is no plan.
POTENTIAL DESTINATIONS: Diamondbacks, A’s, Rays, White Sox, Rangers

Dioner Navarro
Oh, did you want a catcher that could actually, you know, catch? My bad. Dioner Navarro should be the go to trade target for any team needing catching help. How he hasn’t been traded by now is actually kind of a mystery as he’s totally superfluous behind Russell Martin in Toronto. Navarro is no star, but he’s capable defensively and has put up solid offensive numbers in recent years to start for a lot of teams.
POTENTIAL DESTINATIONS: Diamondbacks, White Sox, A’s, Red Sox, Rangers