The season literally just started, but it is never to early to take a look at some managers entering the season on the hot seat. In a season where it seems that just about every team is hoping to contend, there could be a lot of teams with a hair trigger ready to fire their manager at the first sign of trouble. Five managers in particular need to start strong if they don’t want to get canned in-season.

Terry Collins
Considering that Terry Collins already allegedly received a stern talking to from the owner after the Mets lost Spring Training game, an early one at that, there probably isn’t a seat any hotter than the one Terry is sitting on. That’s totally absurd because the Mets aren’t really considered contenders. Some think they have dark horse potential, but that’s based almost entirely on the love for their crop of young starting pitching. What could possibly go wrong there?

The Wilpons have been cheaping out on restocking the roster for years, but they very much seem poised to put all the blame on Collins if he should fail to squeeze every last possible win out of this slightly above average roster.

Don Mattingly ticks off every box on the hot seat manager checklist. He has gotten support from the front office so far and his players seem to love him, but pretty much if anything goes wrong, Mattingly is going to be the first person blamed because he’s “not Andrew Friedman’s guy.” So as long as the Dodgers turn out to be the juggernaut so many see him to be, Donnie Baseball will be just fine. But if they stumble out of the gate, he’ll become Donnie Blackballed. Get it? Get it?! GET IT??? 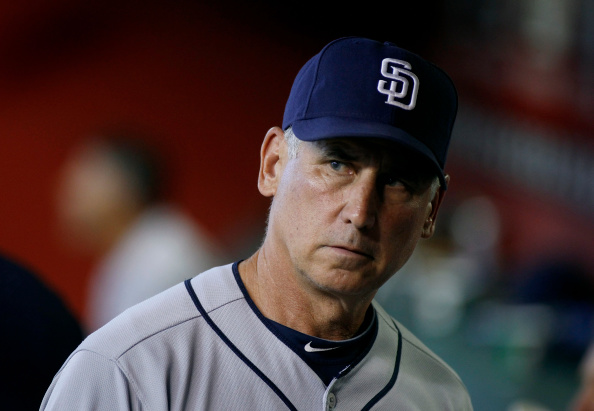 PHOENIX, AZ – AUGUST 24: Manager Bud Black #20 of the San Diego Padres looks on from the dugout during the seventh inning of a MLB game against the Arizona Diamondbacks at Chase Field on August 24, 2014 in Phoenix, Arizona. (Photo by Ralph Freso/Getty Images)

Bud Black
Bud Black is basically a boring version of Mattingly. He’s got all the same things working against him. The only real difference is that Black seems to be more well regarded around the league than Mattingly. Well, maybe a more accurate way of saying that is that Mattingly has some naysayers while Black more has folks who just don’t have much to say about him at all. There isn’t some big overarching belief that Black has quietly been some awesome manager that nobody’s been paying attention to rather that nobody really knows if he has big flaws because nobody’s been paying attention to him. That alone should probably prevent Black from getting fired in-season barring a complete and utter catastrophe, but he’s going to have to show something to keep his job for 2016.

Walt Weiss
This has less to do with Weiss and more to do with the incompetence of the Rockies management. They made some changes in the front office this offseason, but mostly in the form of internal shuffling, so this isn’t a case where the new GM would be upset about inheriting Weiss. However, this is the same front office that only gave Weiss a one-year contract when they first hired him, so the organization isn’t exactly showering him in confidence either. The Rockies will almost surely be awful, but because Colorado has historically operated in a shroud of delusion, they might actually think they are supposed to be good, which means that Weiss could get canned if the team turns out to be as bad as everyone but the Monforts think they are.

Ron Roenicke
Roenicke almost didn’t make this list, then his Brewers got trounced 10-0 by Kyle Kendrick and the Rockies on Opening Day. The Brewers are actually in kind of a weird place. They had a relatively quiet offseason, but they are still a small market team carrying a $100+ million payroll. Their not quite a “World Series or bust” contender, but they also aren’t OK with being mediocre. After contending for much of 2014 only to fall apart late, Roenicke doesn’t have a ton of job security, even with the recent exercising of his 2016 option. If the Brewers start hot and collapse again Roenicke could be gone again. If this Opening Day blowout proves to be a sign of things to come, Roenicke could be out on his ear for that as well. He’s the perfect example of a manager who the team will have no problem blowing out if they decide they need to shake things up for some reason.