Marcus Stroman’s season-ending knee injury will obviously have a significant impact on the Blue Jays going into the 2015 season. Tim Livingston looked at the ripple effects losing Stroman will have on Toronto’s pitching staff. But how will this affect the rest of the AL East? Right now, the competition is dealing with pitching problems of their own.

The Rays face a potentially heavy blow to their rotation, with the news that Drew Smyly — acquired in last year’s three-team David Price trade — won’t pitch while dealing with tendinitis in his left shoulder. For now, the team and Smyly are downplaying the seriousness of the issue. But the left-hander described experiencing tightness, “lots of knots,” and inflammation, according to the Tampa Bay Times‘ Marc Topkin. I’m certainly no athletic trainer or doctor, but that doesn’t sound good.

During Grapefruit League play on Wednesday (March 11), Yankees starter Chris Capuano suffered an apparent leg injury while covering first base. Capuano was penciled in as the No. 5 starter, so that won’t have the same impact as losing Stroman or Smyly. But having to take someone like Adam Warren out of the bullpen does affect the Yankees’ pitching depth.

The absence of a rising star and potential ace from the Blue Jays’ rotation takes them down a notch. Had Stroman emerged as a No. 1 starter, that could have been the difference in what looks to be a close race — possibly a four-team scrum — in the AL East. It’s very possible that the 23-year-old right-hander would not only have been Toronto’s best pitcher, but also the top starter in the division. 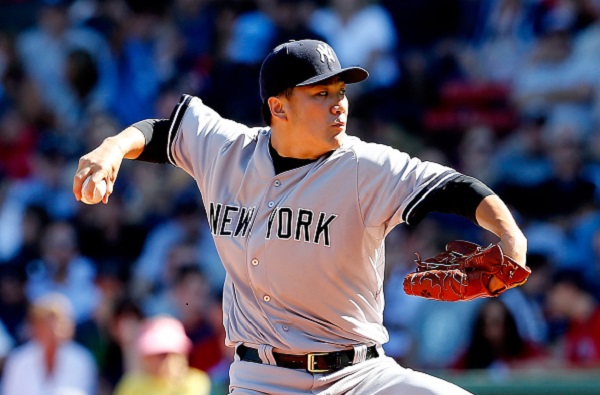 BOSTON, MA – SEPTEMBER 27: Masahiro Tanaka #19 of the New York Yankees pitches against the Boston Red Sox in the first inning during a game at Fenway Park on September 27, 2014 in Boston, Massachusetts. (Photo by Jim Rogash/Getty Images)

To whom would you give that title right now? The Yankees’ Masahiro Tanaka may have been a candidate. But what can be expected from him as he returns from an elbow injury? He won’t make his first spring training start until Thursday (March 12), and the team is proceeding with caution. Undergoing Tommy John surgery is still a possibility for Tanaka if his right elbow hasn’t progressed.

Anyone else? Let’s go through the presumed No. 1 starters on the other AL East clubs. The Orioles’ Chris Tillman? He’s keeping that top spot warm until Dylan Bundy or Hunter Harvey are ready. Rick Porcello or Clay Buchholz could be the Red Sox’s No. 1 guy. Joe Kelly might have the best stuff among their starting five. But most seem to be waiting for Boston to finally make a deal for Cole Hamels.

Despite losing Smyly, the Rays still have Chris Archer and Alex Cobb. Either of those two could end up as the AL East’s best starting pitcher. But will Tampa Bay compete for a division title — or even a wild-card spot? As good as their starting pitching may be, the Rays’ offense doesn’t look to be much improved from the lineup that scored an AL-worst 612 runs with a team OPS of .684.

Even without Stroman, the Blue Jays might have the best rotation in the division. That’s yet to be determined, of course. But if Aaron Sanchez and Daniel Norris can seize the final two openings, a starting five that already has R.A. Dickey, Mark Buehrle and Drew Hutchison at the top looks potentially strong. Maybe Toronto doesn’t have an ace, but which other team in the division does? 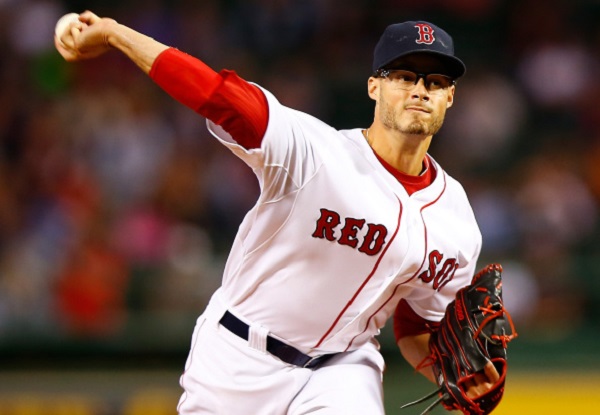 BOSTON, MA – SEPTEMBER 08: Joe Kelly #56 of the Boston Red Sox pitches against the Baltimore Orioles in the first inning during the game at Fenway Park on September 8, 2014 in Boston, Massachusetts. (Photo by Jared Wickerham/Getty Images)

Don’t put this down as an official prediction yet, but if you asked me who appeared to be the AL East favorite right now, I’d pick the Red Sox. And I likely would have said that even if the Blue Jays had Stroman in their rotation. Boston has the best lineup one through nine, and with no room for Mookie Betts or Allen Craig, that means the roster has depth.

Additionally, the Red Sox may not have a true No. 1 starter, but its starting staff looks the deepest one through five. And the team can reach down to the minors for someone like Henry Owens, Eduardo Rodriguez or Matt Barnes when needed. That young pitching, along with player position depth, may also allow Boston to make that trade for Hamels, which would almost certainly tip the AL East in its favor.

Who can make a key pitching addition at the trade deadline, whether that’s Hamels or whomever else turns out to be available, is likely going to provide the boost one team needs to pull away from the pack in this division. The Blue Jays losing Stroman could ultimately mean that the AL East only puts one team in the postseason, with the wild cards coming from the Central or West. How much his injury affects the division race could become very apparent by July.