When the Toronto Blue Jays swung a deal with the Oakland Athletics for All-Star third baseman Josh Donaldson, the return for the A’s seemed a bit on the lighter side.

In exchange for a top five WAR player in the league with plenty of years of control, Oakland received oft-injured third basemen Brett Lawrie, 18-year-old shortstop Franklin Barreto and two close to the majors minor league pitchers in Sean Nolin and Kendall Graveman. Not exactly a kings ransom.

While it’s only early returns, the trade has completely favored one team – the Toronto Blue Jays.

Donaldson has done nothing but rake in the first one-third of the season. He’s tied for the lead league in runs scored (41), and is third in the AL in home runs (13), WAR (2.9) and fourth in RBI (35). He’s been slotted all over the lineup, playing at least five games while batting first, second, fourth and fifth in the Blue Jays lineup. Recently, he’s made a habit of upping his clutch-factor, hitting key home runs late in the ninth inning, victimizing Chicago White Sox closer David Robertson multiple times.

When healthy, the Blue Jays lineup 1-5 seems like an All-Star game lineup with Jose Bautista, Edwin Encarnacion, Jose Reyes, Russell Martin and Donaldson all occupying spots. That’s a lot of power, and plenty of opportunity for Donaldson to drive in some runs.

On the defensive side of things, Donaldson has done a solid job defending the hot corner. He’s been consistent, made the occasional spectacular play and done a great job supporting his pitchers.

While the Blue Jays have stumbled their way to a 22-27 record, but in a very open AL East, Donaldson will be a big part of the team trying to get back on their feet. He’s been better than advertised – which was very, very good.

On the flip side of things, Oakland has seen very little return on the trade so far.

While Lawrie will always bring value in the field defensively, his bat has been silent so far with the A’s. He’s shown little discipline in 45 games,  sporting a .297 OBP with a 51 strikeouts (tied for 9th most in the MLB) to just six walks. With so many strikeouts, you may think he’s swinging for the fences, but if that’s the case, he’s not getting any results as he’s just hit two long balls this season. While he shouldn’t shoulder all of the blame for Oakland’s abysmal 17-32 start, he’s certainly not helping. He’s still young at 25-years-old, but it begs questioning to whether he’ll ever live up to the massive hype that’s following him throughout his career. 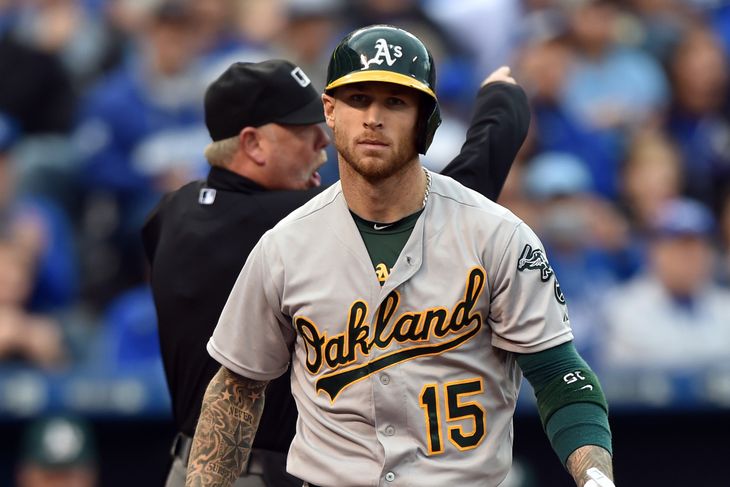 Graveman started the season with Oakland, but after getting shelled in three of four stars, he was optioned to Nashville – where he pitched well enough (1.85 ERA in four starts) to be recalled. In a start last week against Tampa, he threw six scoreless innings – so maybe he’ll turn a corner. The 25-year-old Nolin has pitched strongly in AAA as well, posting a 0.71 ERA over five appearances (12.2 innings). It wouldn’t be surprising to see him earn a call-up in the near future, with the Athletics playoff aspirations slowly sinking away. Perhaps the biggest prize for Oakland in the deal, aside from Lawrie, was the youngster Barreto. He entered the season as the 86th ranked prospect by Baseball America. At just 19 years of age, he’s has a slow start at A+ Stockton, sporting a .292 OBP. At his age, you have to take those numbers with a grain of salt as he’s still years away from contributing anything meaningful at the MLB level.

We are only 50 games through the first season of this deal, but it’s clear one team has benefited and will continue to reap its rewards. The Blue Jays received a franchise player when they got Donaldson. The Athletics got a bunch of depth pieces who might help them in the future. Given the chance, I’m sure A’s GM Billy Beane would like a do-over.