I don’t think anyone would suggest the Baltimore Orioles “won” the offseason, but they certainly spent money like that was their goal. The only problem is the majority of that money went to keeping last year’s 81-81 team intact. They brought back reliever Darren O’Day, catcher Matt Wieters, and first baseman Chris Davis. But they did lose their best pitcher Wei-Yin Chen. In addition to the returning players, they’ve added starting pitcher Yovani Gallardo, DH Pedro Alvarez, RF Mark Trumbo, and LF Hyun Soo Kim. If you squint real hard you can probably convince yourself that’s a somewhat improved team. But are they improved enough to become a real playoff contender? 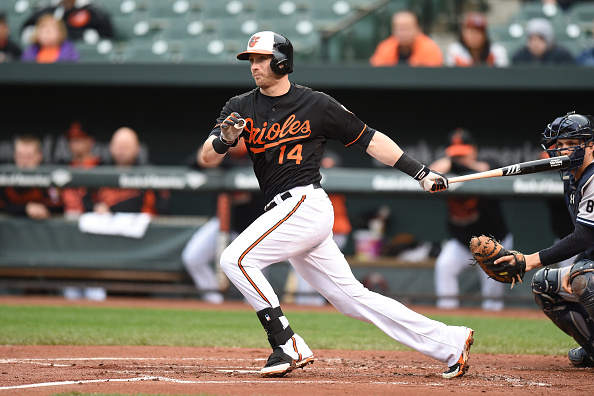 BALTIMORE, MD – OCTOBER 03: Nolan Reimold #14 of the Baltimore Orioles singles to lead off the first inning during game one of a baseball game against the New York Yankees at Oriole Park at Camden Yards on October 3, 2015 in Baltimore, Maryland. (Photo by Mitchell Layton/Getty Images)

Position Battles: Left field looks pretty wide open right now. Nolan Reimold is returns yet again, but Steve Pearce is no longer in the picture. That by no means puts Reimold in a secure position. Last year in 195 plate appearances, he hit .247/.344/.394 (102 wRC+). That’s actually not horrible at first glance. It is better than average production if just barely. However the majority of that damage came against left handed pitching. He was below average vs RHP. Fortunately the Orioles have Hyun Soo Kim who is a left handed hitter. That means they can platoon the pair and hopefully get the most out of each of them. Perhaps unfortunately however, Kim has never played in MLB. This will be his first season outside the KBO. As such, we’re not really sure how his skill set will translate. But we do know what Reimold has to offer. So if Kim struggles it’s going to be a rough year in left field for the Orioles.

Right field is probably settled for the moment, with Mark Trumbo getting the nod. But that’s more out of necessity after signing Pedro Alvarez to be the designated hitter. Though he has played at first base and both outfield corners in every year of his major league career, Trumbo has never been what you might call a full time fielder. He typically spends a large portion of his playing time out of the DH spot himself. And even when he does play the field, he’s never started more than 97 games in the outfield in one season. The advanced metrics (DRS and UZR) consistently rate him as well below average in the outfield. The Orioles can probably count on him for 25+ home runs, but it’s coming with a low on-base, and putrid defense. The problem is the Orioles don’t really have a lot of alternatives. Reimold isn’t a realistic option. Rule 5 pick Joey Rickard might be though.

Rickard spent his minor league development with the Rays after they drafted him in 2012. He’s hit well at every stop in the minors but that doesn’t always translate to the major league level and he has no real power to speak of (13 home runs over four seasons). MLB Pipeline rates him as above average defensively, with above average speed, and a chance for an average hit tool. He’s probably a fourth outfielder on most teams, but with the uncertainty the Orioles have at their corners, Rickard just might play his way into a more meaningful role in Baltimore. The fact that he might be the only true center field back-up on the 40-man roster only increases his chances of making the opening day roster. 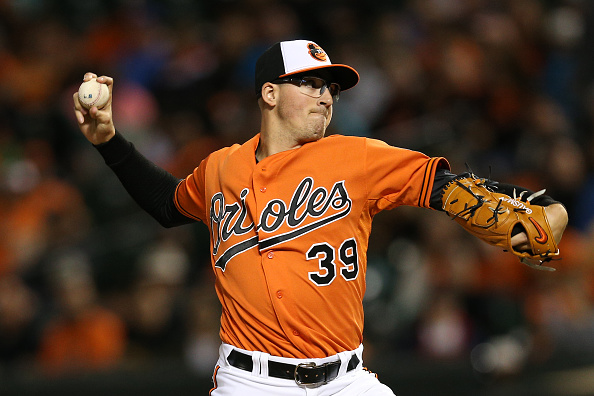 BALTIMORE, MD – SEPTEMBER 30: Starting pitcher Kevin Gausman #39 of the Baltimore Orioles works the fourth inning against the Toronto Blue Jays during game two of a double header at Oriole Park at Camden Yards on September 30, 2015 in Baltimore, Maryland. (Photo by Patrick Smith/Getty Images)

Injury Concerns: Matt Wieters returned mid-season last year from Tommy John surgery. He did play from June through the end of the season. That would normal help to allay fears of re-injury. However he’s experienced soreness in his elbow during spring training. An MRI revealed no structural damage which is good. But it serves as a reminder that he’s at higher risk than an average player. At the very least it’s something the Orioles will have to keep an eye on. When Wieters is right, he’s one of the best catchers in baseball.

At different times each of Kevin Gausman, Hunter Harvey, and Dylan Bundy were considered top pitching prospects in baseball. And each has experienced injury setbacks over the last few years. Bundy has hardly pitched in recent years and Harvey hasn’t pitched since 2014. The rest of the rotation options seem healthy enough, but it could be a revolving door for that fifth starter spot. 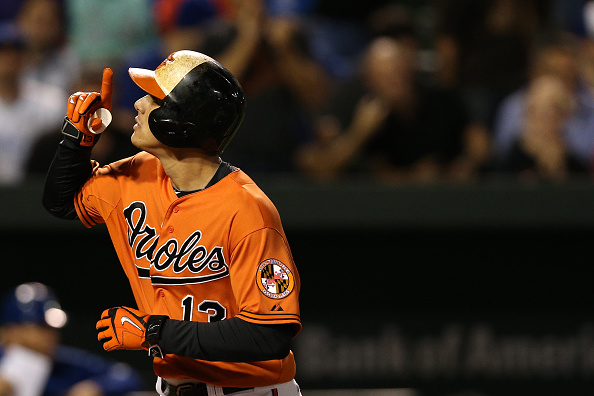 BALTIMORE, MD – SEPTEMBER 30: Manny Machado #13 of the Baltimore Orioles celebrates after hitting a home run in the seventh inning against the Toronto Blue Jays during game two of a double header at Oriole Park at Camden Yards on September 30, 2015 in Baltimore, Maryland. (Photo by Patrick Smith/Getty Images)

Key Player: There’s no question Manny Machado is the crown jewel of the Orioles organization. At just 23 years of age he’s already have two 6+ fWAR seasons (6.2 in 2013, 6.8 in 2015). Last year, he hit 35 home runs and stole 30 bases. Paul Goldschmidt was the only other player in baseball to go 30+/20+. And oh by the way, Machado provides elite level defense at third base. He probably deserves to be mentioned in the same breath as Mike Trout and Bryce Harper. 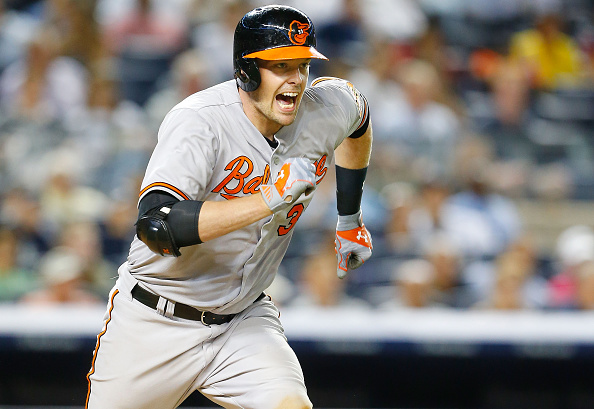 NEW YORK, NY – JULY 21: Matt Wieters #32 of the Baltimore Orioles reacts as he grounds out to the pitcher to end the eighth inning against the New York Yankees at Yankee Stadium on July 21, 2015 in the Bronx borough of New York City. (Photo by Jim McIsaac/Getty Images)

Underrated Asset: They play in the same city that “The Wire” took place in? I mean really, I just don’t know that they have an underrated asset. Maybe Matt Wieters? He had Tommy John surgery in 2014 and as a result has appeared in just 101 games over the last two seasons. As such he’s almost been an afterthought when people talk about the Orioles. But before he got hurt he was legitimately a top five catcher capable of providing top notch defense all while slugging 20+ home runs. The catcher position across baseball is pretty weak. If Wieters can return to even 75% of the player he was before surgery, he’s probably a top ten catcher, and maybe even in the top five. 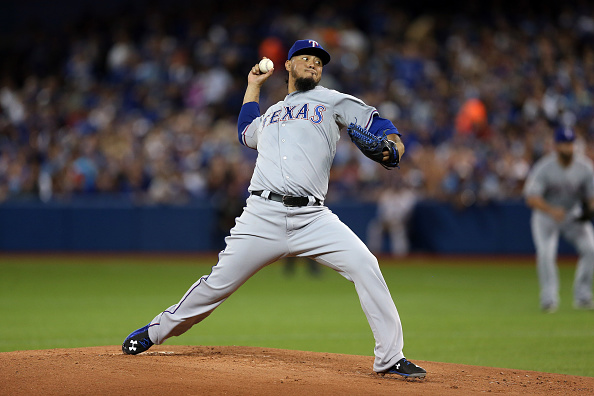 TORONTO, ON – OCTOBER 08: Yovani Gallardo #49 of the Texas Rangers throws a pitch in the first inning against the Toronto Blue Jays during game one of the American League Division Series at Rogers Centre on October 8, 2015 in Toronto, Ontario, Canada. (Photo by Vaughn Ridley/Getty Images)

Burning Question: Is that rotation good enough? It’s really hard for me to look at the top five options and answer in the affirmative. Yovani Gallardo was the only pitcher last year to log an ERA below 4.00. However it’s very clear that Gallardo is no longer the strikeout pitcher he once was. Now he’s more of a contact pitcher and the Orioles infield looks to be excellent defensively–the outfield corners perhaps not so much. I only wish Gallardo was better at inducing ground balls to take full advantage of that infield.

Chris Tillman’s profile is actually quite similar to Gallardo’s. They’re both contact pitchers now, with similar velocity, and a somewhat similar repertoire. However, Tillman induces even fewer ground balls.

Now copy and paste everything I just wrote about Tillman and change the name to Miguel Gonzalez and you have the Orioles’ #3 starter (note that Gonzalez’s repertoire is exactly the same as Gallardo’s). There is one difference though. Gonzalez gives up way more home runs than Tillman and Gallardo.

Last season, Ubaldo Jimenez recovered from what had been the worst season of his career the previous year. However he was still only an acceptable back-end starter: 32 GS, 189 IP, 4.11 ERA, 4.01 FIP. If the Orioles can get that from him again, they have to be happy with it, which goes to show how weak the rotation is.

I’ve already discussed how fragile that fifth rotation spot is.

I’d be more encouraged if the Orioles had a better bullpen. We’ve seen in recent years just how much a great bullpen can compensate for a mediocre to bad rotation – which is exactly how I’d describe the Orioles starting five. And while they do have a great 1-2 punch at the end of their pen with Zach Britton and Darren O’Day, they don’t have that deep well of relievers a team like the Royals has had. TJ McFarland wasn’t good last year, but as an extreme ground ball pitcher, I could see a bounce back. That’s still just an average reliever. Brian Matusz struck out 11.29 batters per nine last year, but he’s unlikely to be quite that effective again. So after Britton and O’Day, we’re just looking at an average bullpen. That’s not going to cut it when the rotation looks as weak as it does. 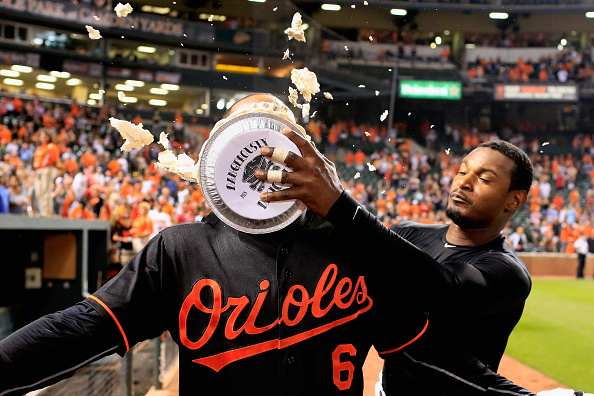 BALTIMORE, MD – JULY 10: Adam Jones #10 hits Jonathan Schoop #6 of the Baltimore Orioles with a pie after Schoop hit a walk off home run giving the Orioles a 3-2 win over the Washington Nationals at Oriole Park at Camden Yards on July 10, 2015 in Baltimore, Maryland. (Photo by Rob Carr/Getty Images)

Best Case Scenario: The infield defense is among the best in baseball. Hyun Soo Kim and Joey Rickard provide a huge defensive boost from the corner outfield spot. This allows the Orioles to get the most out of their nearly entirely contact orientated rotation. Matt Wieters returns to form. Chris Davis doesn’t fall back to Earth. Baltimore’s offense ends up among the league leaders in home runs. All that combines to give them a puncher’s chance at one of the wild card spots.

Worst Case Scenario: The rotation performance is as ugly as it looks on paper. The offense is comprised of too many high strikeout players. They hit a lot of home runs, but they’re solo shots. The lack of corner outfield production makes Avisail Garcia sick to his stomach. The Orioles end up having spent huge dollars for a team that finishes with a worse record than last year.

Realistic Prediction: This is a team that spent hundreds of millions just to bring back Chris Davis, Matt Wieters, and Darren O’Day. They didn’t get a whole lot better. They lost Wei-Yin Chen and essentially replaced him with Yovani Gallardo. That’s a downgrade. The outfield looks bad after Adam Jones. Pedro Alvarez might help to boost production from the DH spot – which isn’t saying much since they were the third worst last year. I don’t think it matters how many wins they end up with, I just don’t see them doing enough to earn a playoff spot.