After yet another disappointing summer in Denver, Rockies fans were left wondering what direction their team would be heading in over the offseason. The answer is still a bit unclear, as the Rockies continued to straddle the line between “retooling” and “rebuilding”, when they really need to go all-in on one plan or another. Until they do that, it’ll be more of the same mediocrity for a fanbase that has had little to cheer about in recent years. 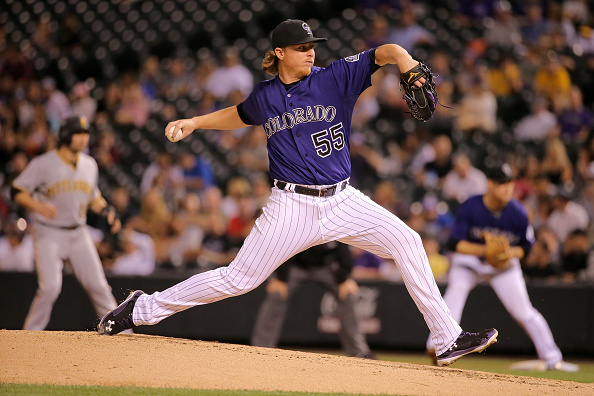 Position Battles: The rotation is a toss-up behind de la Rosa, but we can make some educated guesses. For instance, we can safely say Jordan Lyles will be in the rotation despite the fact he made just ten starts last season since he’s making $2.975 million this year no matter if he’s in the majors or minors. We can also say with some certainty that Chris Rusin will make the team out of camp, either as a starter or long reliever, since he’s out of options and was reasonably effective last season, one of three returning Rockies (along with de la Rosa and Chad Bettis) to notch 100 innings pitched. You can also pencil Bettis in since he was *actually* good this season, and not just “Colorado good”.

That leaves two rotation spots, with Rusin, Jon Gray, Tyler Matzek, Eddie Butler, and Tyler Chatwood as the prime contenders duking it out. I’d give the way too early nods to Gray and Chatwood, with Rusin working out of the bullpen. Why those two? Gray made nine starts in the majors to close out the year, and though his 5.53 ERA was hideous, he did strike out 40 men in 40 2/3 innings. As for Chatwood, he missed all of 2015 recovering from Tommy John surgery, and will presumably be good to go in 2016. The 26-year old made just four starts back in 2014 before being shut down, but back in 2013, he had a 3.15 ERA over 20 starts for the Rockies. Hey, that’s downright impressive for Coors Field.

As for Matzek and Butler, both showed tremendous control problems in the majors in 2015. Butler will turn just 25 next month, and through 19 career MLB starts, he’s walked more hitters (49) than he’s struck out (47). That’s problematic, especially when you’re also allowing 15 homers and 125 hits over 90 1/3 career innings. The Matzek bandwagon crashed into a ditch in 2015 after a strong 2014 rookie year, as he walked 19 in just 22 major league innings while striking out only 15. Over 13 appearances in the minor last year, Matzek threw 13 2/3 innings, striking out 19 (good!) and walking…25 (horrendous!). He reportedly received help for mental health issues late in the year and will hopefully be able to contribute in 2016, but he’s nowhere near a sure thing at this point. 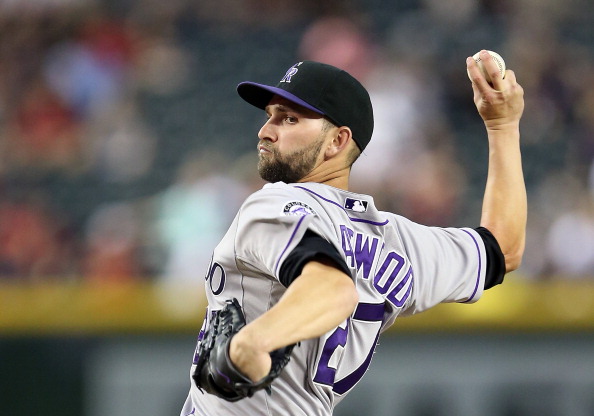 PHOENIX, AZ – APRIL 29: Starting pitcher Tyler Chatwood #27 of the Colorado Rockies pitches against the Arizona Diamondbacks during the MLB game at Chase Field on April 29, 2014 in Phoenix, Arizona. (Photo by Christian Petersen/Getty Images)

Injury Concerns: Will Tyler Chatwood’s elbow be good to go, enabling him to claim a rotation spot? If not, Colorado is looking at the possibility of adding to the rotation either the shaky Butler, the inconsistent Matzek, or Rusin, whose insertion in the rotation would damage their bullpen. That obviously wouldn’t be ideal. The Rockies will also be without reliever Adam Ottavino until at least sometime this summer as he recovers from Tommy John surgery.

Two projected members of the Rockies’ every day lineup, Carlos Gonzalez and Jose Reyes, are also famously frail. Hell, 2015 was the first time Gonzalez *ever* played in 150 games, and just the second time he’s logged 600 plate appearances. I’d bet against him hitting either of those marks for the second year in a row, which is why Colorado’s decision to hold on to him this winter was just baffling to me. Reyes has a more serious, pressing issue in front of him in the form of a likely suspension from MLB for a domestic violence arrest this offseason, but his health shouldn’t be brushed aside – he’s missed time in every year since 2009, only cracking the 140 game mark in two of his last seven seasons. 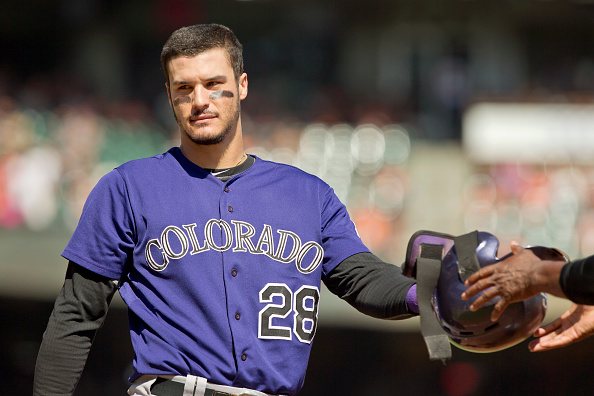 SAN FRANCISCO, CA – OCTOBER 4: Nolan Arenado #28 of the Colorado Rockies hands off his helmet after grounding into a fielders choice against the San Francisco Giants in the third inning at AT&T Park on October 4, 2015 in San Francisco, California, during the final day of the regular season. The Rockies won 7-3. (Photo by Brian Bahr/Getty Images)

Key Player: The performance and health of Gonzalez is probably the biggest key to the Rockies’ success this year, because if he’s good and stays on the field, the team can likely cash in on him and the trade deadline. But Nolan Arenado has assumed the title “face of the Rockies” with last summer’s departure of Troy Tulowitzki, and his 2016 will be crucial to determining his future. Wait, if Arenado is already the face of the Rockies, why should we be thinking about his future?

Complicating the issue is the $5 million salary due to Arenado in 2016, his first of four arbitration-eligible seasons. He’s going to get expensive in a hurry, and is scheduled to hit free agency after the 2019 season, when Arenado will be just 28. The Rockies are only committed to Gerardo Parra (and Jose Reyes’ buyout) in 2018, so it’s not as if the team can’t afford him – but remember what happened when Colorado gave Tulowitzki an extension? The first extension was “just” a six-year, $31.5 million deal in January of 2008 following the team’s 2007 World Series run, and the second one was for ten years and $157.75 million and was doled out in November of 2010, halfway through the prior contract. The Rockies made the playoffs just once after signing Tulowitzki to the first contract, and haven’t won more than 74 games in the five years since signing him to the second, larger contract, which is more similar to the one that would likely be demanded by Arenado because of his age and service time compared to Tulowitzki.

If July rolls around, the Rockies are already 15 back in the NL West, Arenado is raking, and contenders are lining up looking for an upgrade at third base…wouldn’t it at least make sense to consider the prospect of trading him and infusing more talent into the franchise, after arguably waiting too long to to the same thing with Tulowitzki? 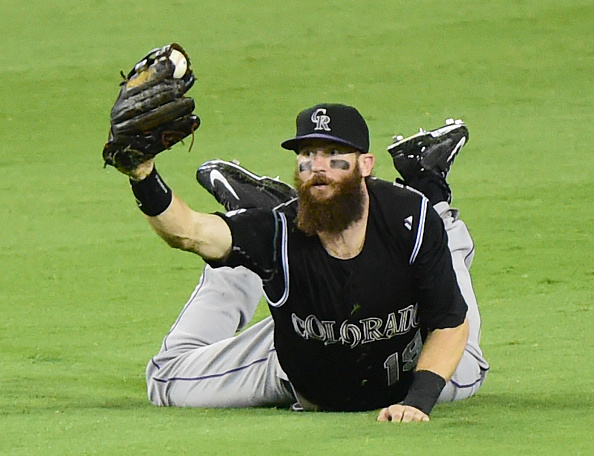 LOS ANGELES, CA – SEPTEMBER 15: Charlie Blackmon #19 of the Colorado Rockies reacts after trapping a single from Chase Utley #26 of the Los Angeles Dodgers during the sixth inning at Dodger Stadium on September 15, 2015 in Los Angeles, California. (Photo by Harry How/Getty Images)

Underrated Asset: Charlie Blackmon will never get any love, huh? It seems like a lot of people were down on Blackmon following his strong 2014 campaign after getting part-time duty in 2011, 2012, and 2013, and he responded in 2015 by doing…well, about the exact same thing as he did in 2014, but with more stolen bases. Seriously.

That’s amazing! Blackmon turns 30 in July, so there probably isn’t much room for even more improvement in 2016, but he’s turned himself into a solid asset for the Rockies over the last two seasons and a player that made them feel a little more comfortable trading Corey Dickerson. However, Blackmon’s defensive statistics in center are disappointing compared to his defensive performance in both left and right field, meaning he could end up costing Colorado some runs in the outfield this year. 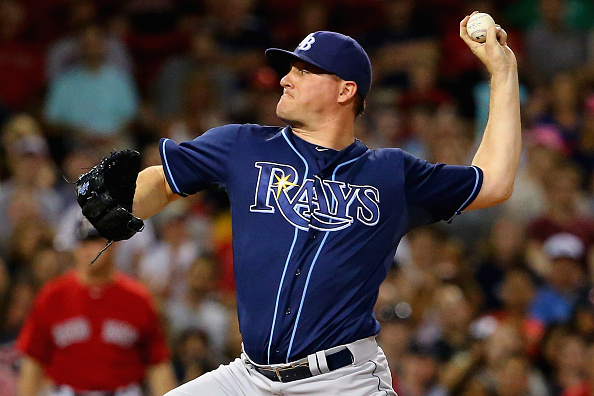 BOSTON, MA – JULY 31: Jake McGee #57 of the Tampa Bay Rays pitches against the Boston Red Sox during the seventh inning at Fenway Park on July 31, 2015 in Boston, Massachusetts. (Photo by Maddie Meyer/Getty Images)

Burning Question: So, is this new and improved bullpen actually a thing?

So that’s three established, solid relievers essentially replacing three middling guys that soaked up a lot of innings for the Rockies. Add in the returning Boone Logan and Justin Miller, and maybe Ottavino come the summer, and you’ve got a bullpen that looks…well, like not quite as leaky of a ship as it was last season – on paper, at least. 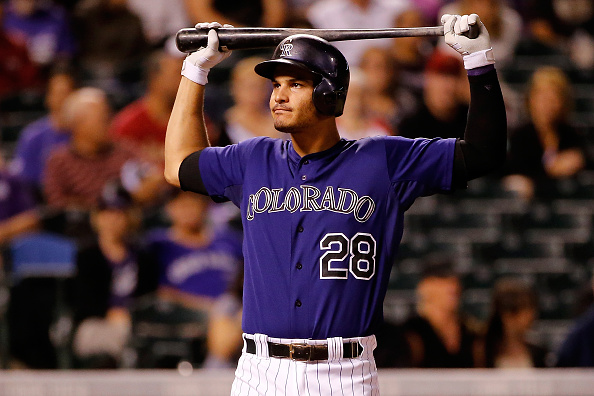 Best Case Scenario: So much needs to go right for the Rockies to make the playoffs that I’m not even considering it as a possibility. Third place with a record somewhere in the vicinity of .500? That would be a success in 2016 for Colorado. Neither of those things have happened since 2010 for the Rockies, by the way. The only players left from that team are Jorge de la Rosa and Carlos Gonzalez. That’s a hell of a lot of turnover.

Worst Case Scenario: There are two possibilities here. The first is that Colorado is terrible in 2016, just like they were in 2015. Gonzalez gets hurt again and they can’t trade him. Reyes either gets hurt or gets a hefty suspension and/or jail sentence for his domestic violence incident, and they can’t trade him. Arenado’s bat takes a step back, and everyone is curious about who the real Nolan Arenado is. The pitching stinks, and all of the Rockies’ young starters don’t progress as expected.

The Rockies finished 66-96. de la Rosa, Blackmon, and Gonzalez are still around, while Morneau, Stubbs, and Tulowitzki are all gone – with only Tulo bringing and value back in return. Isn’t that the worst case for the Rockies and their fans – the team giving them a semblance of hope at the beginning of the year, falling apart, and then the front office standing pat?

Realistic Prediction: In reality, the Rockies appear to be competing for fourth place in the NL West with the Padres, who look like a better team than Colorado despite seemingly shifting into a retooling mode of their own this winter. Colorado won’t challenge the Dodgers and Giants for the NL West crown, and it looks pretty doubtful that they’re going to be able to even make a run at the Diamondbacks for third place in the division.

And perhaps more alarmingly, the Rockies can’t just rely on their offense to carry them anymore. Last year’s squad finished last in baseball with an 85 wRC+, thanks in large part to an unsightly .228/.277/.375 line away from Coors Field. If the offense scuffles like that once again, and the team’s pitching struggles like it has since the team’s inception in 1993…it could end up being another long season in Denver.