For the past few seasons, Mets fans hoped the team’s young pitching prospects would develop into major league starters. They also yearned for the front office and ownership to act like a large-market franchise again, start spending some money and make some splashy moves.

That finally happened in 2015, perhaps a year ahead of schedule. Combined with the heavily favored Washington Nationals collapsing under heavy expectations and the Mets not only emerged as a postseason team, but made a run to the World Series. General manager Sandy Alderson didn’t follow up by suddenly opening the checkbook, but made several moves to improve the middle infield and bullpen, showing that the Mets intend to keep their place atop the NL East while targeting a World Series championship. For fans whose hopes are finally being fulfilled, it’s gratifying to know that a letdown isn’t likely. 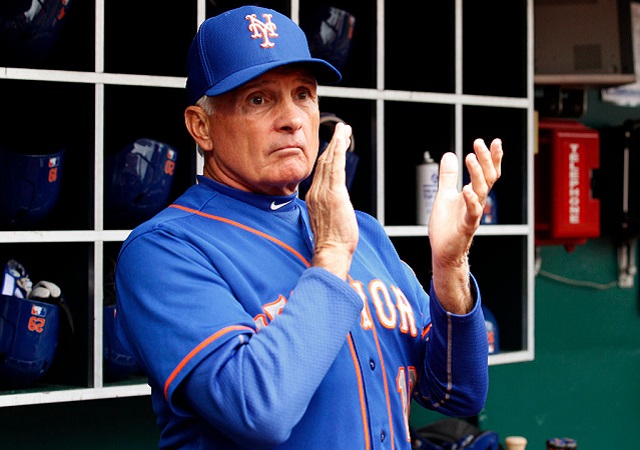 Position Battles: With one of the most stable rosters in MLB, no positions are really up for grabs with the Mets this spring. Even the bench is essentially set after Ruben Tejada was released, making Wilmer Flores the main utility man with Matt Reynolds possibly filling another infield reserve role. Alejandro De Aza looked like a trade candidate after Yoenis Cespedes was re-signed, and a strong spring (batting .429/.512/.514) may draw interest, though manager Terry Collins will probably want his left-handed bat off the bench.

Going into spring training, five relievers were competing for two available spots in the bullpen. But left-hander Sean Gilmartin has pitched well, striking out nine batters in 10 innings while walking two. Jim Henderson was signed to a minor-league deal, but has likely made the roster, allowing one run and five hits in 7.2 innings with 11 strikeouts and one walk. 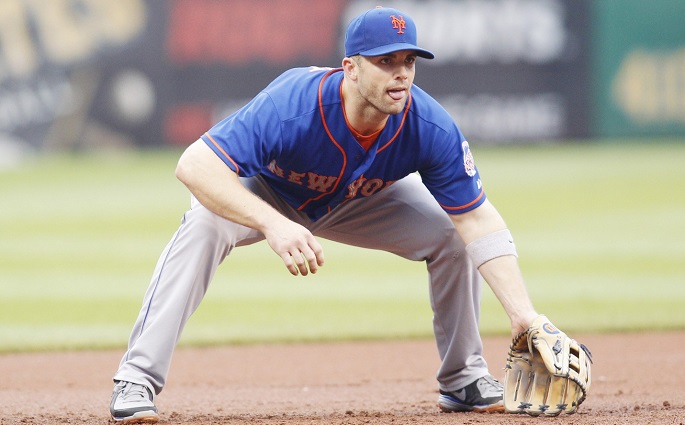 Injury Concerns: David Wright played in only 38 regular season games last year due to a chronic back condition known as spinal stenosis, which compresses and inflames the nerves in his spinal canal, causing pain in his lower back and legs. Getting himself ready to play requires an intense rehab regimen, but Wright did play in all 14 of the Mets’ postseason games. The team is hoping he can play 135 games, though that might be pushing it. Flores will likely fill in plenty at third base, in addition to Erik Campbell (who made 48 appearances at the position last season), and Wright will likely be a DH throughout interleague play.

Keeping the young starting pitching healthy will also be a concern for the Mets, considering that Matt Harvey, Jacob deGrom and Steven Matz have each had Tommy John surgery. Bartolo Colon also had elbow surgery in 2010, but the more pressing concern is that he’ll turn 43 years old in May.

Harvey and deGrom nearly pitched 200 innings last season, and the Mets will likely try to maintain the same workload for them by using off-days and skipping turns in the rotation to keep them from wearing down. That may apply even more with Syndergaard and Matz, since they’ll be pitching their first full major league seasons. 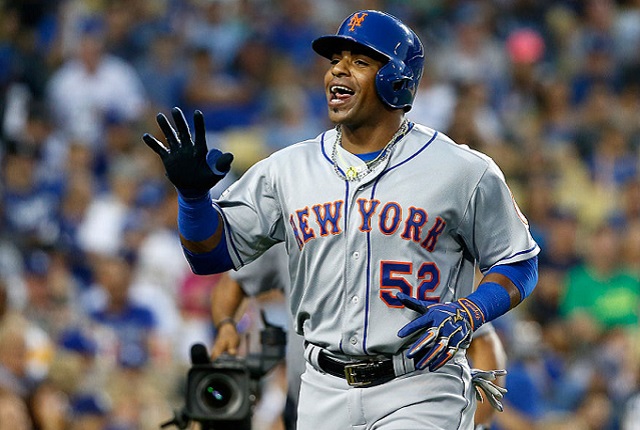 Key Player: Yoenis Cespedes made a significant impact on the Mets’ lineup after he was acquired from the Detroit Tigers at the trade deadline. Earlier in the season, the Mets struggled to score runs. But after Cespedes joined the team, he led an offensive surge that helped fuel a division title run and leave the Nationals in the dust. In 249 plate appearances, the Cuban slugger hit .287/.337/.604 with 14 doubles, 17 home runs and 44 RBI. Cespedes’ production actually prompted talk among fans and media that he should earn NL MVP consideration despite playing just 57 games with the Mets.

That put him in position for a big free agent payday, but whether because of his age or inconsistency over his four major league seasons, Cespedes drew little interest on the open market. The Mets didn’t want to sign Cespedes to a six- or seven-year deal worth more than $100 million, so waited for the market to push him back down to their price. Once that occurred, going back to a city he enjoyed playing in and a team that would contend for a return to the World Series became an easy choice for Cespedes.

That worked out to the Mets’ excellent fortune, because without Cespedes, the middle of the order had no major right-handed power threat or run producer. Not to mention that letting Cespedes sign elsewhere would have sent a bad message to Mets fans that the team wasn’t serious about following up a World Series run by going for a championship. No more worries about that. If Cespedes opts out of his contract after this season and goes elsewhere, at least the Mets can say they made a good-faith effort to contend. 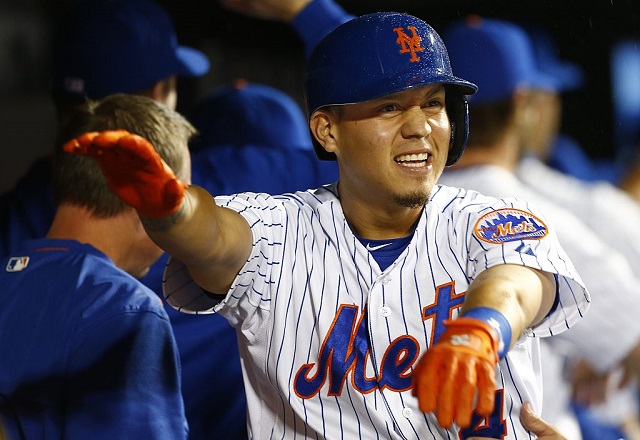 NEW YORK, NY – MAY 16: Wilmer Flores #4 of the New York Mets is congratulated in the dugout after hitting a grand slam home run in the fourth inning against the Milwaukee Brewers on May 16, 2015 at Citi Field in the Flushing neighborhood of the Queens borough of New York City. (Photo by Rich Schultz/Getty Images)

Underrated Asset: Wilmer Flores earned folk-hero and fan favorite status after his emotions demonstrated how much he wanted to play for the Mets. As rumors broke that he had been traded to the Milwaukee Brewers in a package for Carlos Gomez, the 24-year-old (who had been in the Mets organization since he was a teenager), Flores was overcome by his feelings and began crying on the field. When the trade fell through and Flores was still with the Mets, it seemed as if a cruel joke had been played on him.

Nearly getting traded apparently jolted Flores, who hit .306/.337/.506 in August. He also hit in the postseason once Ruben Tejada’s broken leg ensured that Flores would be in the starting lineup. While it was something of a surprise that the Mets signed free agent Asdrubal Cabrera with two shortstops already on the roster, Flores is a valuable reserve because he can play three infield positions. The most important of those will be third base while David Wright’s back needs plenty of rest and recovery during the season.

Burning Question: How reliable will the Mets’ defense be up the middle?

Re-signing Cespedes ensured a key run producer would return this season. But will the Mets end up undercutting his offensive contributions by asking him to play center field over a full season? Cespedes has cost his team nearly 13 runs more than an average player at that position during his career. He’s a much better left fielder, arguably a great one. (During the past two seasons, he’s been credited with 26 Defensive Runs Saved.) But if he can supply 30-homer power and an OPS over .850, mediocre defense won’t sting as much.

The Mets are hoping solid offense also overcomes defensive question marks at second base and shortstop. Neil Walker might actually be a worse glove at second base than Daniel Murphy, but has been a more consistent hitter over his career. Asdrubal Cabrera isn’t as good defensively as Flores or Tejada, but also isn’t that much worse and will likely provide more offensive production at shortstop than either of those players.

Besides, the Mets’ starting pitchers may be so good at striking out opposing batters (three of them could rack up 200 Ks) that it may not matter if fielders occasionally botch balls in play that more reliable defenders might handle. As long as Cespedes, Walker and Cabrera make the routine plays and show decent range, defense shouldn’t be a major concern. 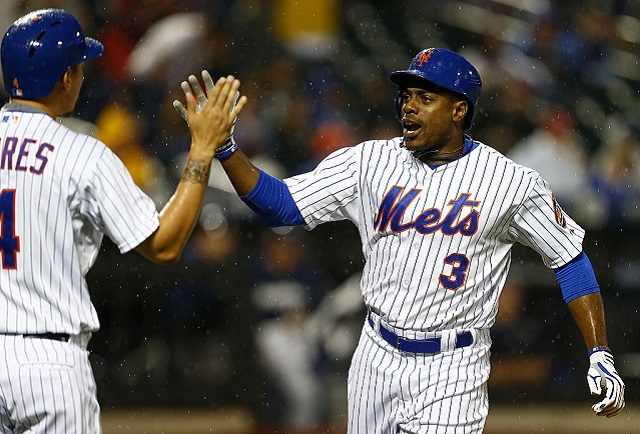 NEW YORK, NY – MAY 16: Curtis Granderson #3 of the New York Mets is congratulated by teammate Wilmer Flores #4 after hitting a two run home run in the seventh inning against the Milwaukee Brewers on May 16, 2015 at Citi Field in the Flushing neighborhood of the Queens borough of New York City. The Mets defeated the Brewers 14-1. (Photo by Rich Schultz/Getty Images)

Best Case Scenario: The young superstar rotation gets even better with another year of experience and development, and the Mets have the deepest, most dominant starting pitching in MLB. Harvey, in particular, pitches like a NL Cy Young Award candidate. Familia is once again a lockdown closer, with Addison Reed and Antonio Bastardo giving the Mets a reliable late-inning relief corps. Wright is able to play more than 120 games, providing some right-handed offensive production, good defense at third base and valuable leadership on the field. And most importantly, Cespedes continues his success from last year, produces like a superstar over a full season and plays decent defense in center field.

If the Nationals continue their downward slide and the Marlins continue to show an inability to develop into a contender, the Mets could win the NL East rather easily and worry more about taking on the competition they’ll face in the postseason.

Worst Case Scenario: Familia lets his blown World Series saves carry over into the regular season, while neither Reed or Bastardo can take over as closer. Wright misses 100 or more games. Lucas Duda continues to rack up strikeouts while his batting average plummets. And the defense up the middle is consistently unreliable, turning easy outs into longer innings (and longer pitch counts).

If any of the Mets’ top arms get hurt during the season, that could be the difference in finishing ahead of or defeating rivals like the Cubs or Giants in the postseason. It could also shrink the gap between them and the Nationals in the division. Granted, losing a top pitcher would affect any team and the Mets are in a better position to replace any pitching injuries than most MLB teams. But if Zack Wheeler hasn’t recovered from Tommy John surgery, Rafael Montero continues to struggle with his location and Steven Matz runs hard into his innings limit, that pitching depth suddenly doesn’t look very impressive.

Realistic Prediction: Though the Cubs pose a strong argument, the Mets are arguably the best team in the National League with the best starting pitching in MLB. A return to the World Series and finishing this time with a championship is certainly attainable. The team took a big step in progressing from 79 wins to 90, and maybe even developed into contenders a year ahead of schedule, thanks to its young pitching coming together.

The scary thing for the competition in the NL is that the Mets’ pitching could be even better this season. And though adding payroll might still be a concern, Alderson demonstrated last year that he can make bold, impactful moves at the trade deadline that can give his team a boost during the pennant race, if needed. Winning 95 games or more is not out of the question, nor is ending the season with a clubhouse champagne celebration.