The New York Yankees are baseball’s big spenders no more. Or at least they haven’t been in recent years. A lot of people think they’re saving their money for what should be a ridiculously loaded 2018 free agent class. Even if that’s the case, it does nothing to help them in 2016. For this season, their two biggest moves were the trades that brought in middle infielder Starlin Castro and (suspended) reliever Aroldis Chapman. When you look across the diamond, you do see nine starters, but you see a good deal of veteran players. That’s kind of who the Yankees are and usually it works. But will that be the story again this year? 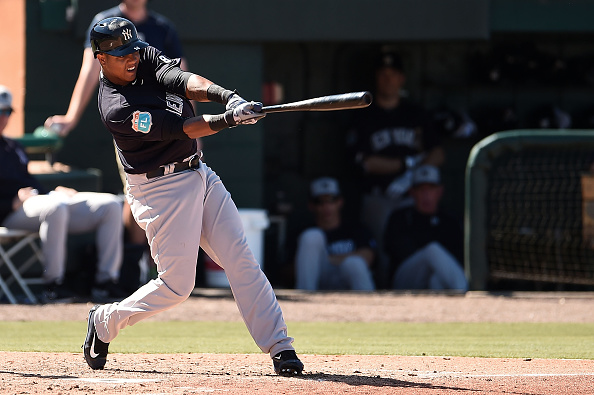 LAKELAND, FL – MARCH 04: Starlin Castro #14 of the New York Yankees swings at a pitch during the fifth inning of a spring training game against the Detroit Tigers at Joker Marchant Stadium on March 4, 2016 in Lakeland, Florida. (Photo by Stacy Revere/Getty Images)

Position Battles: I wouldn’t exactly say the Yankees look “good” at every position, but they do have a starter at every position. So in that sense, they seem pretty set. I could see some variability with their middle infield situation though.

Didi Gregorius is their incumbent shortstop and he’s coming off the best season of his major league career. He was worth 3.1 WAR according to FanGraphs’ metric. However the majority of that value came from his defense. That’s not necessarily a bad thing, but defensive metrics aren’t as reliable as offensive stats. So it’s possible his value wasn’t quite 3 wins. Offensively he wasn’t very good: 578 PA, .264/.318/.370, 89 wRC+.

Starlin Castro was acquired this offseason in a trade with the Cubs. He moved over to second after the promotion of Addison Russell and that’s where he’ll play with the Yankees. He has all the natural talent to be an effective fielder, but he’s prone to make errors. And offensively, he’s maddeningly inconsistent. Early in his career he looked like a guy that was going to developing into a high average hitter capable of 15+ home runs and 25+ stolen bases. He’s only going to be 26 this year, but his speed has essentially vanished having stolen less than 10 bases in each of the last three years. The power hasn’t developed quite as hoped either. He’s still in the 10-14 HR range, but he’s only reached that zenith twice. When it all clicks he’s a 3 win player, as he was in 2014: .292/.339/.438, 14 HR, 117 wRC+, 2.8 fWAR. But you can’t necessarily expect it to always click for him and when it doesn’t he’s barely above replacement level as he was last year: .265/.296/.375, 11 HR, 0.8 fWAR.

Gregorius and Castro are each capable of handling second base and shortstop. So depending on how each plays, it is possible one of them replaces the other in order to make room for someone else. The Yankees don’t have any real shortstop prospects ready to contribute this year. But Rob Refsnyder might be an option at second base. He got a cup of coffee last year and acquitted himself well. He’s done nothing but crush minor league pitching so he probably doesn’t have much to gain from playing in AAA. He might open the season on the Yankees bench and it’s feasible to see him hit his way into a larger role at second base–or one of Gregorius/Castro hit their way out of a regular role. 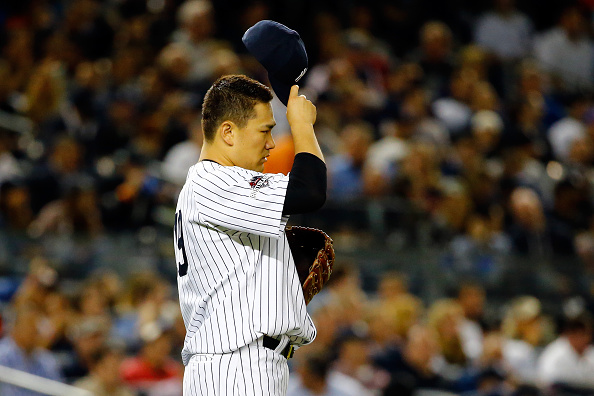 NEW YORK, NY – OCTOBER 06: Masahiro Tanaka #19 of the New York Yankees reacts after giving up a double to George Springer #4 of the Houston Astros in the third inning during the American League Wild Card Game at Yankee Stadium on October 6, 2015 in New York City. (Photo by Al Bello/Getty Images)

Injury Concerns: Masahiro Tanaka suffered a partially torn UCL in July of 2014. Often the result is Tommy John surgery. But instead, Tanaka and the Yankees chose to rehab the injury instead and so far, he’s been able to pitch through it. Then in October, he had surgery to remove bone spurs in his elbow. The two aren’t necessarily related, but clearly Tanaka is a huge injury risk. And that’s a big problem because the Yankees are rather lacking in rotation depth at the moment.

Last year, Mark Teixeira had an offensive resurgence, putting up his best wRC+ since the 2009 season. But he ended the season on the disabled list with a bone bruise. That’s not something to be concerned about this year. But he’s also not played in more than 123 games since 2011. He’ll be 36 this year so you almost have to expect he’s going to miss time again this year. It’s just kind of the norm for him it seems.

It’s not an injury, but I wanted to mention the suspension of Aroldis Chapman. He was involved in a domestic abuse incident last October. He was alleged to have choked his girlfriend and he admitted to firing a gun into his garage. The police dropped the charges, but Major League Baseball felt the incident was serious enough to suspend Chapman for 30 games. The Yankees have more bullpen depth with Miller and Betances there to fill the void. But it’s still a significant blow. 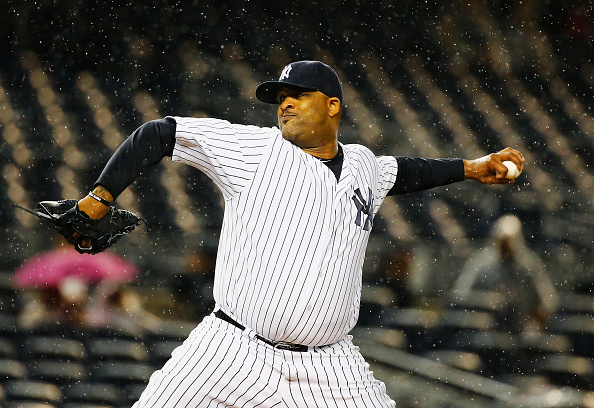 Key Player: Masahiro Tanaka is easily the Yankees best pitcher, but the one they really need to step up is CC Sabathia. He ended his season a few weeks early to check himself into rehab to get the help he needed to fight his alcohol addiction. There’s no telling how that might have impacted his pitching performance over the last few years. But he has not been the same pitcher he once was.

That could simply be due to age. He turns 36 later this year. It could be due to mileage. He’s made 30+ starts in all but four seasons of his 16 year career. At this point in his career, he’ll probably never be the dominant ace he once was. But the Yankees really just need someone to add some stability to their rotation.

Tanaka has the injury concern. Pineda has never made more than 28 starts in his 3 seasons at the major league level. Eovaldi made 27 starts last year and 33 the year before, but he’s never cracked 200 innings. And will be pitching in his first full season at the major league level. If Sabathia can return to his inning eating ways, it will go a long way towards stabilizing this rather young Yankees rotation. 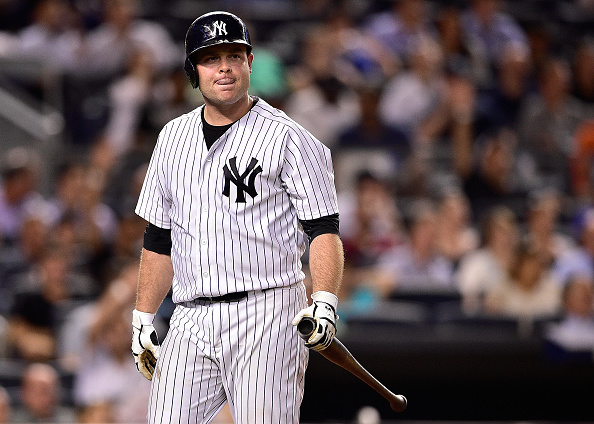 Underrated Asset: When people talk about the best catchers in baseball you’ll typically hear names like Buster Posey, Yadier Molina, Jonathan Lucroy, and maybe Russell Martin and Salvador Perez. One name you don’t hear as much of is Brian McCann. I think it’s related to his poor batting averages over the last four seasons, which is a shame because the fact is he’s still easily a top ten catcher.

Over the last three years his 8.1 fWAR was the 7th best from a catcher. He was about as valuable as Sal Perez (8.4 fWAR) and Yan Gomes (8.7 fWAR). He also led the position in home runs unless you count Evan Gattis and since we’re not talking about fantasy baseball, we don’t count Evan Gattis.

As I mentioned, his batting averages have been quite low over the last four years: .230, .256, .232, .231. That’s not good, but he doesn’t actually strike out as much as you might think. And while he doesn’t walk as much as he once did, he still draws walks at an above average clip. Add the 20+ home run power and you have a pretty good offensive catcher.

Add in competent defense and you have a player that has been worth close to 3 wins in each of the last three years. The component parts might not be all that pretty. And he might be overlooked by some. But Brian McCann is still a big asset behind the plate. 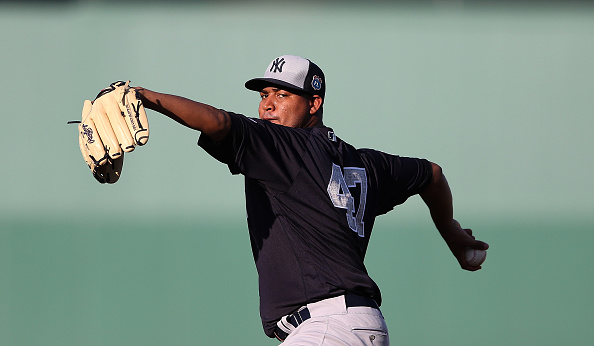 FORT MYERS, FL – MARCH 15: Ivan Nova #47 of the New York Yankees warms up prior to the start of the Spring Training Game against the Boston Red Sox on March 15, 2016 at Jet Blue Park at Fenway South, Fort Myers, Florida. (Photo by Leon Halip/Getty Images)

Burning Question: Will the Yankees’ lack of rotation depth be their undoing?

Mitchell has considerably less experience. He’s appeared in 23 games, 3 of which were starts. The results were ugly but 40 innings is a very small sample size. Looking at his minor league numbers does not provide much comfort though. He is probably best suited as a long reliever/spot starter. If the Yankees have to go to him for more than a few scattered starts something has gone very wrong. 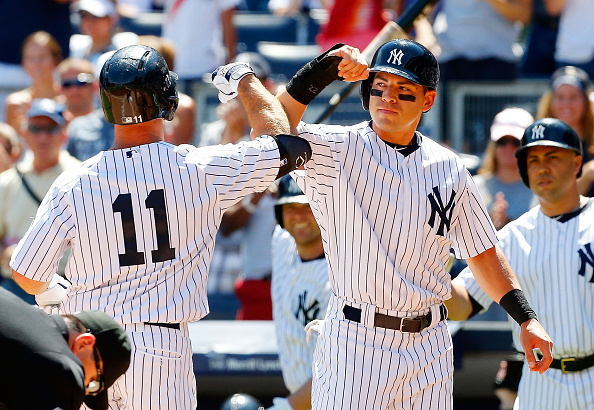 Best Case Scenario: The rotation stays healthy and productive. Chase Headley bounces back. Jacoby Ellsbury bounces back. The Yankees get the good Didi Gregorius and Starlin Castro. They lock up the division title by very early September.

Worst Case Scenario: Chase Headley hits as poorly as he did last year. Castro and Gregorius are the bad versions of themselves. The rotation lacks production and innings. The Yankees look every bit their age and fall out of contention well before September rolls around.

Realistic Prediction: The Yankees are a solid team. They do have a number of older players, but they’re probably younger than they have been in years. And their older players are still mostly good. Offensively and defensively they’re pretty strong. The bullpen is another are of strength, especially once Chapman returns. I have significant reservations over their rotation however. Still, if they can keep it intact long enough they should make a real push for another division flag and short of that should be in competition for a wild card spot all year.