Billy Beane has been a fan favorite inside and outside of Oakland for many years now. He’s gotten a reputation as a savvy baseball mind—thanks in no small part to the phenomenon of “Moneyball.”

But recent trades have left the farm system shaky and without much to show for it in the way of playoff berths. This offseason has been no different, with Beane sending numerous players out and bringing in just as many. Has the magic returned to the Oakland Athletics or will this be yet another stumbling block for Beane? 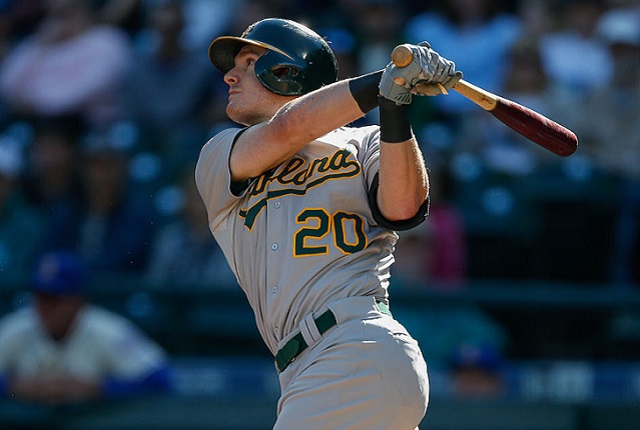 Position Battles: For the most part the starting roles are all taken care of. One of the new faces, Khris Davis, helps solidify the outfield. That leaves Coco Crisp, Sam Fuld, and Chris Coghlan to compete for playing time in a back-up role. Coghlan was recently acquired in a trade with the Cubs, so he’s a lock to make the roster. Crisp is making $11 million this year with a vesting option for 2017. He won’t get enough playing time for the 2017 option to become guaranteed, but the A’s will almost certainly want to extract as much value out of him as possible given his salary. That likely leaves Sam Fuld on the outside looking in. It doesn’t seem like there is a strong chance the A’s will be bringing six outfielders into the regular season.

While I wouldn’t call the A’s rotation after Sonny Gray particularly strong, I would say for the most part, it’s pretty well set. Jesse Hahn has proven himself to be an effective, if somewhat fragile, pitcher. Chris Bassitt acquitted himself nicely in his first major league season and the A’s will look for him to build on that. Rich Hill signed a rather lucrative $6 million contract after a hot September. He’s certainly guaranteed a spot on the opening day roster. Kendall Graveman is a ground ball machine that doesn’t offer much in the way of upside nor stability. He spent a significant amount of time on the disabled list—oblique—last year. That said, he’s one of the few remaining pieces of the Josh Donaldson trade and Oakland will probably want to give him every chance to succeed. These will be the five starters the A’s take into the regular season, but there are two interesting pitchers trying to come back from injury: Jarrod Parker and Henderson Alvarez. I would not be surprised to see them wrestle a spot away from one of the less effective pitchers should they regain their health.

Fans of Mark Canha were likely somewhat dismayed when the A’s acquired Khris Davis, thereby putting Canha’s role with the club in question. Left field is no longer open for significant playing time. If Canha is going to contribute in more than a backup role this year it looks like that playing time will have to come from first base. There he will be competing with recent acquisition Yonder Alonso. The platoon splits would seem to favor Alonso, the lefty. But Canha could simply hit his way into the starting role. He’s the younger player with longer team control, and the Athletics would probably like to see him come out triumphant. 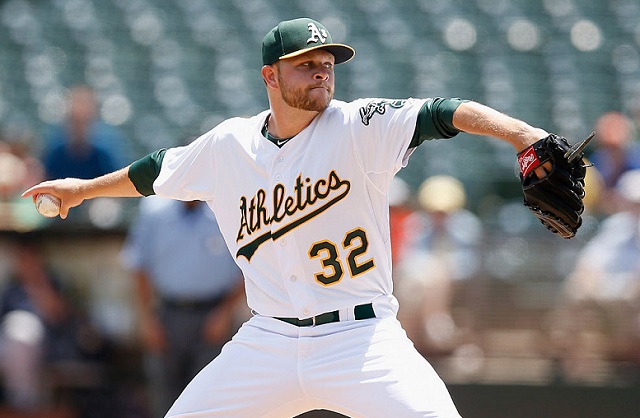 OAKLAND, CA – JULY 01: Jesse Hahn #32 of the Oakland Athletics pitches against the Colorado Rockies in the first inning at O.co Coliseum on July 1, 2015 in Oakland, California. (Photo by Ezra Shaw/Getty Images)

Injury Concerns: Pretty much their entire rotation after Sonny Gray. Jesse Hahn and Kendall Graveman each spent time on the disabled list last year. Hahn had problems with his already surgically repaired elbow. That’s a major red flag. Graveman’s injury was to his oblique. It’s not nearly as frightening, but oblique injuries can be very time-consuming. Rich Hill’s whole career seems to be a series of injuries with some innings pitched in between. The next two pitchers on the depth chart are Jarrod Parker—attempting to return from his second TJ surgery, having already experienced a pretty hideous setback—and Henderson Alvarez, attempting to return from shoulder surgery. Talk about a glass cannon rotation.

The position players look a sturdier bunch. Khris Davis did have knee surgery last year, but he returned mid-season and played without restriction for the rest of the year. It shouldn’t be a concern going forward. Jed Lowrie also missed significant playing time. His injury was to his thumb. However, he too returned to finish the season unrestricted. There shouldn’t be any lingering issues with him either. Coco Crisp has dealt with more than his fair share of injuries in his career and could again. However, his role with the club has been diminished and so too would the impact of any time lost to injury. 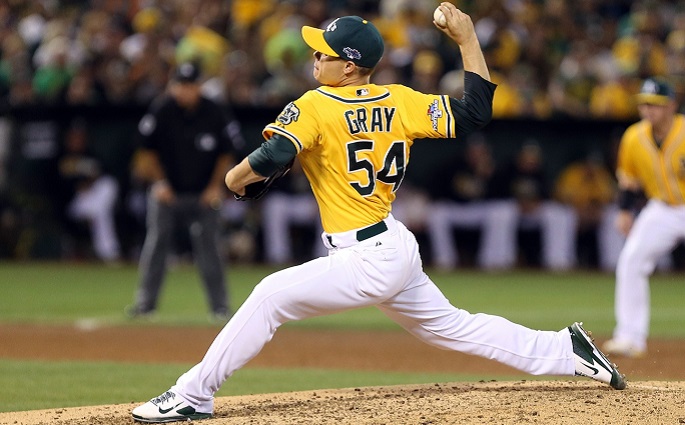 Key Player: It is difficult to single out one key player with the Athletics. Their roster construction epitomizes the concept of “team effort.” They really don’t have a lot of players that figure to be well above average, so they’ll need everyone to contribute to their utmost.

If I had to pick someone, it would be Sonny Gray. He is the one player on this team I think everyone would agree is a star-caliber player. He’s also the only pitcher in their rotation that looks like a safe bet to make 30+ starts, which he has in the past two seasons. The bullpen could be taxed this year and will need Gray to continue being himself to provide at least one day out of five for the bullpen to relax. Two years ago, he made 33 starts with a 3.08 ERA and 3.46 FIP. Last year, he made 31 starts with a 2.73 ERA and 3.45 FIP. The results were better last year, but FIP believes he was remarkably consistent in both seasons. More of the same is exactly what Oakland is hoping for this year.

That’s if the A’s want to compete this year. However, should they fall out of contention, Sonny Gray represents their single best opportunity to restock their weakened farm system. It’s not something Oakland and its fans are hoping they’ll need to consider, come the trade deadline. But sometimes, hard choices must be made. And the price for frontline pitching with years of control is higher than ever. The A’s finished fifth in their division last year. At some point, they might be forced to part with their ace. 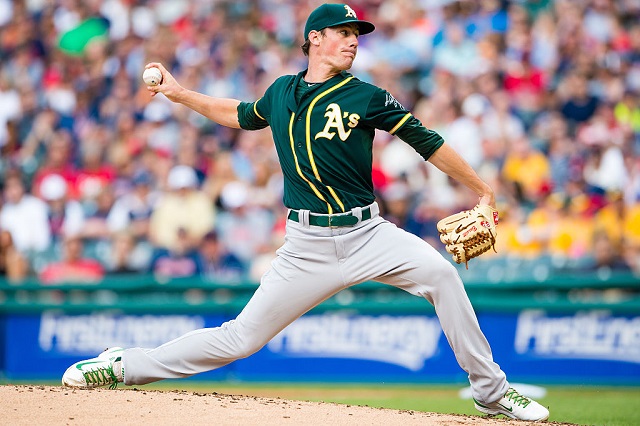 Underrated Asset: The trendy pick here is probably Mark Canha. But I’m going with starting pitcher Chris Bassitt. He came to the A’s as part of the Jeff Samardzija trade with the White Sox. In 86 innings with the big league club last year, he accumulated a 3.56 ERA and 3.76 FIP. He only struck out 17.7% of batters faced and walked 8.3%. Neither is a particularly good number. But he showed a much better ability to log strikeouts in the minor leagues at 8.7 K/9. Reports had him sitting in the low 90s, but his average fastball velocity during his time with the Athletics was 93.1 mph. That’s nearly a two mph jump from his the previous season—small sample size caveat applies, as he only pitched 29 innings with the White Sox. Bassitt will probably never be a frontline pitcher, but if he can maintain that 93 mph velocity and increase his K% a bit, he could turn out to be a pretty solid mid-rotation option.

The trade to acquire Jeff Samardzija and Jason Hammels doesn’t look so good now. It didn’t help Oakland make the playoffs and Addison Russell looks every bit the player he was projected to be. Meanwhile, there are still questions as to how effective Chris Bassitt and Marcus Semien will be; the latter has barely been league-average.

The Josh Donaldson trade looks like an unmitigated disaster. Donaldson went on to become the AL MVP and Brett Lawrie continued to disappoint. The A’s traded Lawrie earlier this offseason for two young pitchers with unclear value. Sean Nolin, who at the time looked to be one of the key pieces to the trade, was recently designated for assignment and subsequently claimed off waivers by the Brewers.

This past winter, Billy Beane further stressed the farm system by trading a consensus top catching prospect in Jacob Nottingham for Khris Davis. I’m a fan of Milwaukee’s former left fielder, but he has considerable defensive questions and at 28 years old, he’s not likely to improve much from the approximately 2-win player that he’s been. That’s a fine player, but he’s more of a complimentary piece than someone you can build around. And the rest of the team doesn’t look particularly strong. So it might just be that Beane gave up a potentially above-average catcher for an outfielder that doesn’t really get them any closer to the playoffs.

Best Case Scenario: Sonny Gray is Sonny Gray. Chris Bassitt steps up. The bullpen doesn’t collapse because the rest of the rotation stays healthy. Khris Davis’ HR power in Oakland is the same as Khris Davis’ HR power in Milwaukee. Mark Canha hits his way into a starting role. Billy Butler bounces back. The Angels and Mariners suck—which is actually pretty likely. The Astros experience a collective sophomore slump. The Rangers health concerns are realized. And, well… honestly, the A’s probably still don’t win the AL West. I just can’t see them topping the Astros and the Rangers. Maybe one, but not both. So their realistic best-case scenario is probably contending for a wild card spot.

Worst Case Scenario: Sonny Gray doesn’t beat his projections this year, which have him closer to a 4.00 ERA than a 3.00 ERA. Chris Bassitt turns back into a pumpkin. The rest of the rotation spends significant time on the disabled list. Khris Davis doesn’t break 20 home runs in O.Co. Marcus Semien really makes Beane regret trading Addison Russell more than he probably already does. The team finishes right around where they did last year—68 wins—but their farm system is that much worse off.

Realistic Prediction: The Oakland Athletics are probably improved from last year. They do have a good amount of depth in the outfield. If their rotation stays healthy, it could actually be pretty solid. Especially if Parker and/or Alvarez can return and contribute in a meaningful way. They have some upside with guys like Mark Canha and Chris Bassitt. That still probably leaves them as a third-place team in their own division. That doesn’t mean they can’t compete for a wild card. It just feels unlikely. If they’re still in the race near the trade deadline, look for Billy Beane to make more trades. But at this point, that might be the worst thing the A’s could do. His recent track record looks pretty ugly. And their farm system is already looking pretty thin. If Beane were to make more trades and the team still falls short of the playoffs—again—one has to wonder how much longer he’ll hold his position.