The Padres were supposed to be contenders in 2016 after infusing their major league roster with talent, most notably Matt Kemp, Craig Kimbrel, Derek Norris, James Shields, and Justin Upton. And naturally, they got worse from 2014 to 2015, losing three wins and a place in the standings to finish 74-88, good for fourth in the NL West. And instead of trying to make his team better for 2016 this offseason, GM AJ Preller retooled the Padres – and arguably put them in position to finish with a better record in 2016 than in 2015. 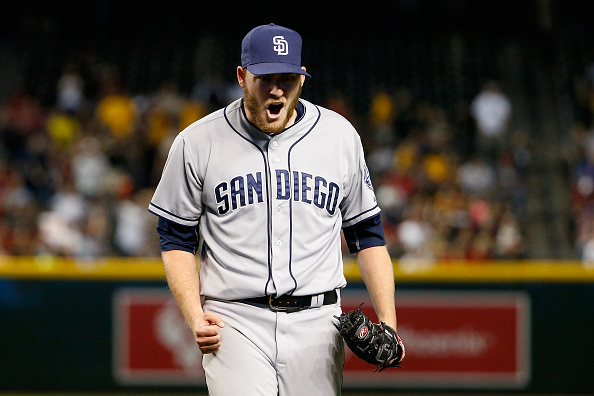 PHOENIX, AZ – MAY 09: Relief pitcher Brandon Maurer #37 of the San Diego Padres reacts after getting out of the 10th inning of the MLB game against the Arizona Diamondbacks at Chase Field on May 9, 2015 in Phoenix, Arizona. (Photo by Christian Petersen/Getty Images)

Position Battles: Most of the jockeying in San Diego appears to be for bench positions, which is what it is, I guess. How much playing time can Jose Pirela get at second base? Cory Spangenberg isn’t exactly Jedd Gyorko, but Pirela isn’t chopped liver himself. Ex-Brave Christian Bethancourt has the edge on former top prospect Austin Hedges for the backup catcher job behind Derek Norris because he’s out of options. Rule 5 pick Jabari Blash is also going to be given every opportunity to stick, giving him an advantage over prospects like Travis Jankowski and Manuel Margot, who should probably be playing every day over someone like Melvin Upton Jr. if they do end up getting the call to the majors.

The fourth and fifth starter spots are sort of open following the departures of Odrisamer Despaigne and Ian Kennedy, and while one spot appears to be earmarked for former reliever Brandon Maurer, the other looks open. Robbie Erlin, Brandon Morrow, and Colin Rea all made starts in the majors for the Padres last season, and Erlin appears to have the early edge since (like the aforementioned Bethancourt) he’s out of options. And like with most teams, there’s a spot or two open in the bullpen, and I think Casey Janssen ends up forcing his way in – if he’s healthy. 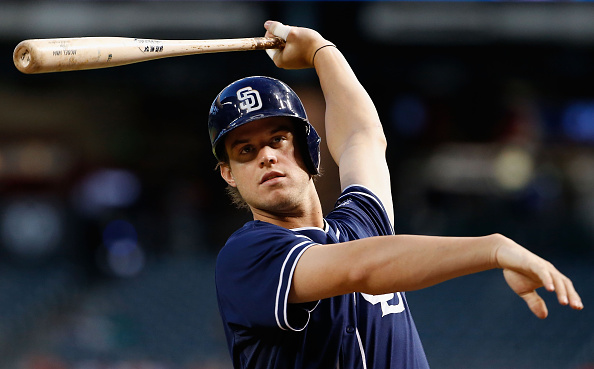 PHOENIX, AZ – SEPTEMBER 15: Wil Myers #4 of the San Diego Padres warms up on deck before batting in the first inning of the MLB game against the Arizona Diamondbacks at Chase Field on September 15, 2015 in Phoenix, Arizona. (Photo by Christian Petersen/Getty Images)

Injury Concerns: Matt Kemp has been branded as injury prone, but he’s played in 150 games in all but two years from 2008-2015, so I’m not sure how much it really applies. Yeah, he’s a liability in the field, but we’ll get to that a little later. Wil Myers is the real player to be concerned about here – he won the AL Rookie of the Year award in 2013 despite spending 64 games in AAA, and he hasn’t surpassed the 88 games he played in the majors for the Rays since that season, logging just 60 and 253 plate appearances right now. Myers was fine when he was actually on the field last year, but staying healthy is the key issue here – not his performance.

But aside from those two, San Diego looks like a relatively healthy team. Yeah, Brandon Morrow is notoriously frail and Robbie Erlin is returning from Tommy John surgery, but neither is expected to be a key component for the Padres in 2016 – though both could surprise if given the chance.

We’re also waiting for Andrew Cashner to finally break, but I think everyone’s been waiting for that since he made his major league debut in 2010 with the Cubs. Maybe it’s just not going to happen. 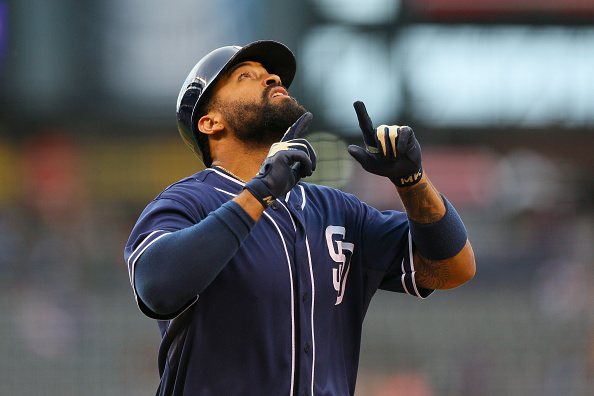 DENVER, CO – AUGUST 14: Matt Kemp #27 of the San Diego Padres points to the sky as he celebrates his first inning two run home run against the Colorado Rockies at Coors Field on August 14, 2015 in Denver, Colorado. (Photo by Justin Edmonds/Getty Images)

So what’s the downside? Well, he couldn’t hit on the road against right-handers (which is a pretty decent-sized sample, all things considered), slashing just .229/.277/.370 in 249 plate appearances. His 6.0% walk rate was his lowest since 2007, when Kemp was just a 22-year old still wet behind the ears. His .178 ISO was the second-lowest mark of his career excluding a 73 game 2013 season. His fielding was atrocious even after a move out of center into right field, but the Padres will be crossing their fingers that a second year at Petco Park can help improve his defense in the corner.

This is a guy that’s still owed $73 million by the Padres over the next four seasons. Maybe, just maybe, they can move him and a large chunk of that cash if he’s able to stay healthy and productive in 2016 and (probably) 2017. And if the Padres have any hopes of contending in the next two to four years, they’re going to need him to be both healthy and productive – either for them, or for the team they trade him to for prospects. 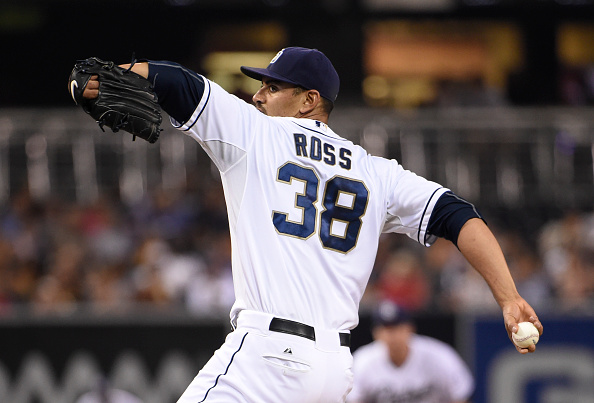 The only thing not to like are the walks, which are mitigated by that ever-rising ground ball rate (has increased every year since 2011). He’ll be 29 in April, is making a relatively modest $9.625 million salary this season, and is still under team control through next season. If San Diego struggles this year as most pundits expect, they’ll have a lovely trade chip on their hands in Ross. 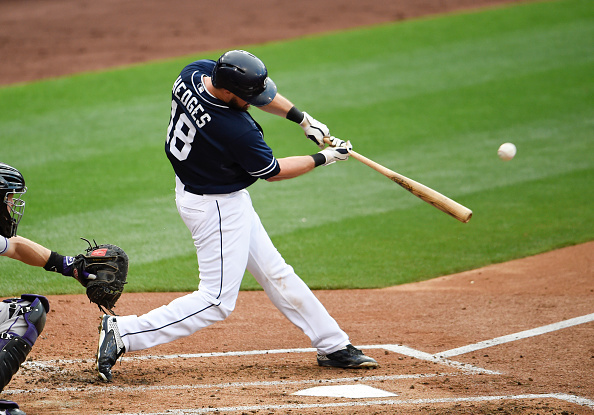 Burning Question: Who are the building blocks for this team?

Looking at the 2016 Padres, I see a bunch of players that could be playing somewhere else in August or in 2017. Kemp and James Shields are highly paid and on the wrong side of 30. Ross and Cashner are ridiculously talented, and approaching free agency. Derek Norris has not one, but two touted prospects behind him on the depth chart. Myers is still an enigma, a guy that could be a future superstar or a guy that could be non-tender bait in the offseason as he approaches his first year of arbitration. Jon Jay, Alexei Ramirez, and Fernando Rodney are useful, cheap veterans that could be of use to contenders at the trade deadline.

Maybe the next wave of the future starts arriving this year with guys like Blash, Pirela, and one of Bethancourt or Hedges. Or maybe Padres fans will have to wait another year for Jankowski and Margot and Alex Dickerson and Hunter Renfroe to come along. Either way, don’t get all that attached to the 2016 Padres – they might do better than the 2015 Padres, but they’re not here for the long-term. 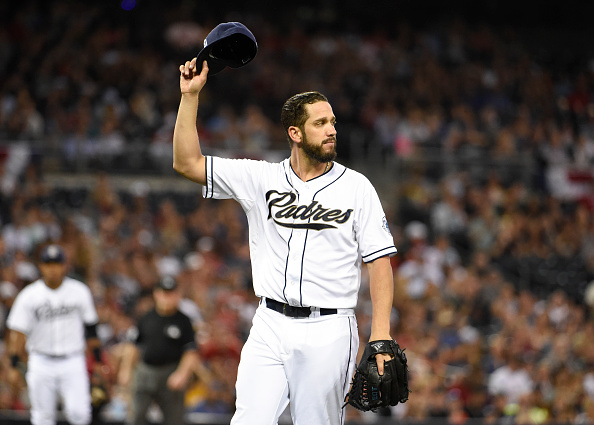 SAN DIEGO, CA – AUGUST 7: James Shields #33 of the San Diego Padres tips his cap towards the outfield after getting the final out during the third inning of a baseball game against the Philadelphia Phillies at Petco Park August 7, 2015 in San Diego, California. (Photo by Denis Poroy/Getty Images)

Best Case Scenario: If everything breaks absolutely perfectly for the Padres this season…I think they can contend for a playoff spot. Seriously. Really. I mean, it would take everything breaking *perfectly*, but I could see it happening. They’d need 90+ starts of above average to excellent pitching from Ross, Shields, and Cashner, 60+ starts of average pitching from their fourth and fifth starters, a typical bang-up job from the bullpen, and an offense and defense that check in at least at league average, but it could happen.

Last year, it didn’t happen. The bullpen was mediocre, and not great. The rotation was very good, and healthy, but not great outside of Ross. The offense stunk outside of the departed Justin Upton. The defense was shoddy. In other words, if the good from last season stays good and the bad gets better, this team can contend – but that’s a lot of ground to make up.

Worst Case Scenario: Cashner, Ross, and Shields all made 30 starts last year. If none of them do that with the Padres this year and it’s not because of a trade, this team could be worse than the Rockies. Starting pitching was the best part of the 2015 Padres, and they’re already having to replace an anchor (albeit a middling one) in Ian Kennedy. If they’re also scrambling to replace one of their top three starters? It could be a long year. Combine that with the potential injury/ineffectiveness issues looming for Myers and Kemp and the loss of the team’s best hitter in Upton, and the Padres could be a horror show.

Realistic Prediction: When I said in the intro that this team “could” be better than they were in 2015, I didn’t mean “worlds better” – I meant by a couple of game. 76 or 77 wins isn’t a huge step forward, but it’s an outcome that could be in the cards for the Friars. When you have a starting rotation headed by Ross, Cashner, and Shields, and players with the potential of Kemp and Myers in your every day lineup, there’s a real possibility for damage to be done.

Much of San Diego’s success in 2016 is based on assuming their new faces can provide better production than dead weight did in 2015 – Yangervis Solarte for a full year over Middlebrooks, Ramirez over Alexi Amarista, Spangenberg for a full year over Gyorko, and so on. If they do, even at a roughly average level for their position, it’s not hard to see the Padres slightly improving. However, passing the Diamondbacks for third place in the NL West, let alone contending for a playoff spot, is a tall order.