Last season was supposed to go much differently for the Washington Nationals. After adding Max Scherzer to an already formidable starting rotation, along with a lineup that boasted young stars like Bryce Harper, Anthony Rendon, and Ian Desmond and a deep bullpen, the Nats were widely viewed as World Series favorites. Expectations can be a hell of a thing, as Washington D.C. sports fans know painfully well.

Riddled with injuries, poor performances from several players and a manager that was way over his head in dealing with veteran players, handling a bullpen, and addressing game situations, the 2015 Nationals were easily the most disappointing team in MLB last season. And while they buckled under heavy expectations, the New York Mets emerged as a contender and kicked the Nats further down the hole they dug for themselves. With key departures, general manager Mike Rizzo overhauled the pitching staff and hired a far more experienced manager with a proven record of success in Dusty Baker, the Nats will try being a sleeper contender instead of a heavy favorite. 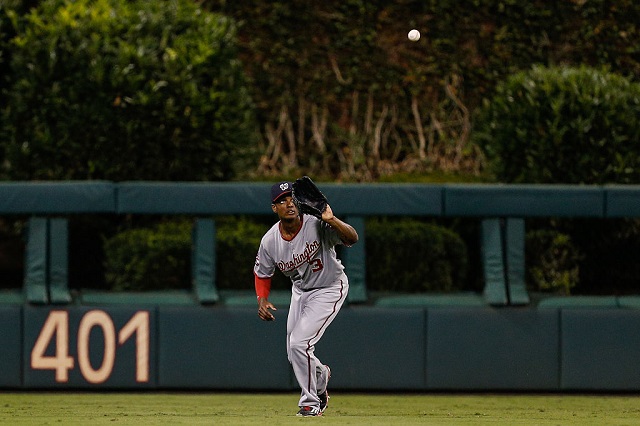 PHILADELPHIA, PA – SEPTEMBER 14: Michael Taylor #3 of the Washington Nationals catches a long fly ball hit by Darnell Sweeney #24 of the Philadelphia Phillies in the second inning of the game at Citizens Bank Park on September 14, 2015 in Philadelphia, Pennsylvania. (Photo by Brian Garfinkel/Getty Images)

Position Battles: After acquiring Ben Revere from the Toronto Blue Jays for Drew Storen, it appeared that the Nationals had their replacement for Denard Span in center field. Revere is a good contact hitter (.306/.342/.377 last season) who gets on base and provides strong defense. He will likely be the starter. But Michael Taylor, viewed as the successor for Span, has hit the ball extremely well this spring (.485/.514/.848) and impressed Baker enough to warrant consideration for the job.

Taylor will probably be the team’s fourth outfielder or could begin the season at Triple-A (though that would leave the team without a backup center fielder). But if he keeps hitting well, might Baker be tempted to start Taylor in center, shift Revere to left and make Jayson Werth an extremely expensive bench player?

Another question mark is at shortstop, where Danny Espinosa, Stephen Drew and Trea Turner are competing for a starting position. At 22, Turner is so young that the Nats will probably decide he needs a full season at Triple-A, especially since he hasn’t hit well this spring (nor did he in his major league stint last season). If Turner can’t provide more offense at the position, Espinosa and Drew may as well be on the roster since they both play excellent defense and can play at second or third base as well. Espinosa can also supply some power, which might give him the nod, though he has more experience as a utility man than Drew. 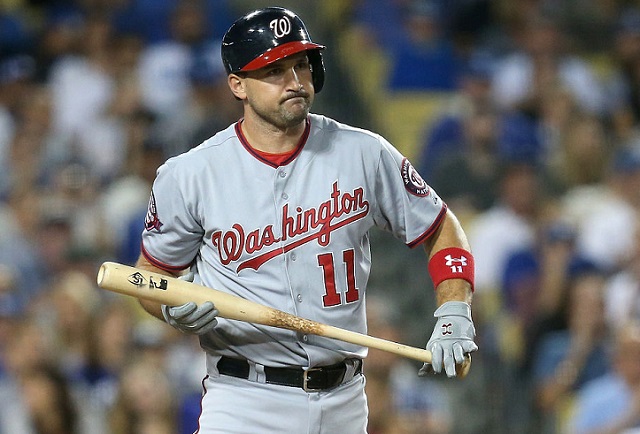 LOS ANGELES, CA – AUGUST 11: Ryan Zimmerman #11 of the Washington Nationals reacts after striking out swinging to end the top of the fifth inning against the Los Angeles Dodgers at Dodger Stadium on August 11, 2015 in Los Angeles, California. (Photo by Stephen Dunn/Getty Images)

Injury Concerns: Any talk about injury concerns has to begin with Ryan Zimmerman, who’s been a disabled list mainstay over the past eight seasons. Last year was no exception, as he was limited to 95 games with plantar fasciitis and oblique injuries. Consequently, Zimmerman put up the worst numbers of his career, batting .249 with a .773 OPS and 16 home runs. The Nats have depth at the position with Cliff Robinson and Tyler Moore, but are a much better lineup with a healthy Zimmerman available. Baker has taken it slow with him during the spring, hoping to keep him fresh for the regular season. Those measures need to yield benefits.

Anthony Rendon appeared in only 80 games last year due to knee and oblique issues. That was a significant setback for a player whom the Nats viewed as their best offensive threat besides Bryce Harper. Espinosa and Drew can play third base if Rendon gets hurt, but neither player is as strong a hitter, so the offense would suffer.

Jayson Werth was yet another player who missed significant time, limited to 88 games recovering from offseason shoulder surgery and suffering a broken wrist. The wrist was a factor in a terrible season during which Werth batted .221 with a .685 OPS. At 36, Werth’s ability to recover from injury doesn’t figure to improve and with Taylor on the rise, Baker might not show much patience if the veteran doesn’t produce. If not for a contract that owes him $42 million over the next two years, would his roster spot be in danger?

Stephen Strasburg is also a likely concern after making only 23 starts last season because of an upper back injury. The right-hander has only made 30 or more starts in his career (though he was shut down in 2012 upon reaching 160 innings) and durability has been problematic with his injury history. Washington has young starting pitching that could fill in should Strasburg be sidelined, but without him as a reliable top-three starter, it’s difficult to see how the team can contend. 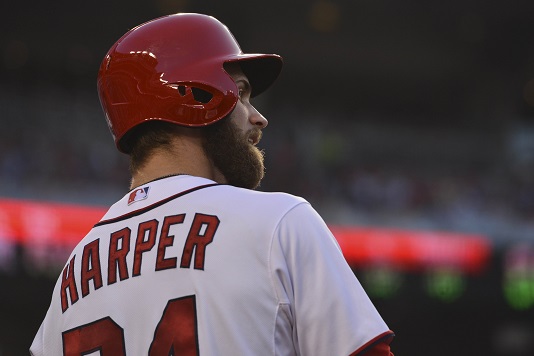 Key Player: M-V-P! M-V-P! The argument could be made that the Nats were still disappointing, winning only 83 games despite Bryce Harper winning National League MVP honors. Even with Washington’s subpar finish, Harper was still the clear favorite for the award because his performance was so far beyond his peers. At 22 years old, he batted .330/.460/.649 with 42 home runs, 38 doubles and 99 RBI in 654 plate appearances emerging as MLB’s brightest star. How bad would this team have been without Harper’s offensive production?

No, the Nationals probably won’t compete for a division title or postseason bid if Stephen Strasburg doesn’t have a great season, as explained elsewhere in this article. But without Harper, this team wouldn’t stand a chance at contention. If he’s not in the middle of the lineup, the Nats don’t have another consistent run producer, especially one who can hit for big power. That applies even more if Zimmerman and Rendon miss significant time with injuries again. Even with Harper, the Nats could probably use more production, which the front office alluded to by pursuing Jason Heyward and Yoenis Cespedes. As it stands now, Harper is the Nationals’ offense.

Underrated Asset: Clint Robinson probably wouldn’t have appeared in 126 games last season if there weren’t so many injuries to deal with. But with Zimmerman and Werth out especially, the 32-year-old became a valuable fill-in at first base and left field last season. Robinson put up an impressive batting line of .272/.358/.424 in 352 plate appearances with 15 doubles, 10 home runs and 34 RBI, providing some right-handed power in the lineup when needed. Ideally, if the Nats’ everyday players stay healthy and productive, Robinson won’t see as much playing time in 2016. But he’s a reliable piece Baker can use off the bench or to give a rest to players who tend to break down throughout the long season. 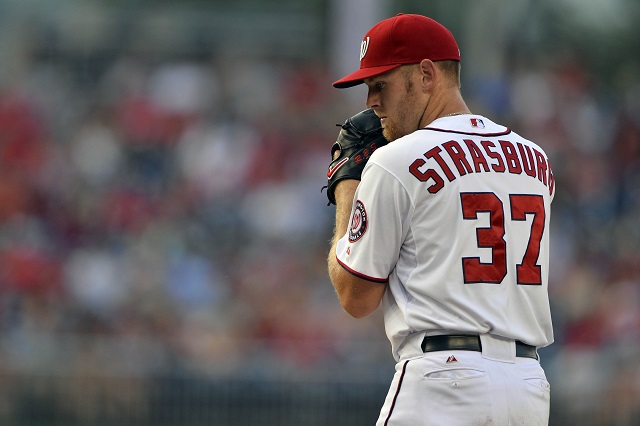 Burning Question: Can Stephen Strasburg pitch like an ace this season?

Labeling Strasburg a disappointment would be unfair and inaccurate, as he’s often a dominant pitcher with strikeout stuff (11 Ks per nine innings last season) and excellent control (1.8 walks per nine). But has he been the ace-caliber starter the Nationals (and MLB) projected him to be since he was the No. 1 overall selection in the 2009 draft? Does he really want to be in Washington, D.C. or is he biding time until he can return to the West Coast?

It feels as if Strasburg, 27, has never quite gotten over the shutdown of 2012, when he was the Nats’ ace and seemed capable of leading a deep postseason run. But the constant questions about his innings limit and the intense scrutiny that developed for a team making the jump into contention earlier than expected appeared to wear him down. That apparent lack of mental toughness, along with no interest in being a team leader or face of the franchise type of figure, has hung over him during the past three seasons.

But if the Nationals are going to contend for a division title and compete for a wild-card bid, Strasburg will need to be at his best. He doesn’t have to be the No. 1 guy. Max Scherzer enjoys that responsibility. But 33 to 34 starts and more than 200 innings are needed from Strasburg. He has to be a top-of-the-rotation starter now that Jordan Zimmermann is gone. Though wins are out of his control, something approaching 15 to 20 victories and showing interest in being a positive influence on the pitching staff would not only be beneficial to his team, but help boost his value going into free agency. (Scott Boras is already rubbing his palms together in anticipation.) 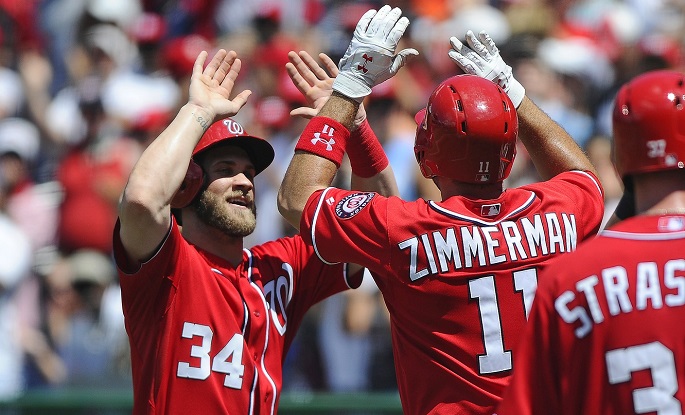 Best Case Scenario: Harper puts up another MVP-caliber season and thrives as a young face for the game, continuing to give baseball much-needed personality. Zimmerman and Werth stay (relatively) healthy and provide reliable run production in the lineup. Daniel Murphy continues hitting like he did in the postseason and brings stability to second base. Baker is the calm voice of experience in the dugout who won’t lose games or create questions for his team, and has the respect of his veteran players.

With the pressure off and diminished expectations, the Nationals push the Mets for the division lead, while keeping pace with the Pirates, Cardinals, Dodgers and D-Backs for a wild-card spot and get to the postseason, where their pitching makes them dangerous in a short series.

Worst Case Scenario: Injuries once again plague the lineup, with Zimmerman, Werth and Rendon missing multiple games and exposing the Nats’ lack of depth. Werth also plays so badly that the Nats have to consider eating the rest of his contract. Neither Espinosa, Drew or Turner provides enough offense at shortstop, creating a hole in the lineup. Papelbon is no longer a lockdown closer for an overhauled bullpen that needs one, and is once again a disruptive clubhouse presence. Rizzo’s tenure as GM comes to an end, and his successor begins to renovate the roster around a young core of talent.

Realistic Prediction: The Nationals are probably being overlooked a bit, failing to fulfill World Series projections while the Mets have leapfrogged over them in the standings. Though there may not be as many big names in the starting rotation, the overhauled pitching staff could still be one of the best in the league, especially with young reinforcements like A.J. Cole and Lucas Giolito that should be ready to contribute later in the season. So much went wrong last year that a bit more going right could still result in this team chasing 90 wins.