Baseball starts next week, people – this is not a drill! The season officially starts this Sunday with three games and then Monday, every other team has their opener. But just because the season hasn’t even started yet doesn’t mean we can’t talk about the end-of-season awards. Today, we’re talking about the Cy Young award. I’m not going to talk about who I think will win though. It would be boring for everyone but me to spend 3,000 words just talking about Clayton Kershaw (believe me I could do it), so instead I’m going to highlight six dark horse Cy Young candidates for the 2016 season, three from each league.

Noah Syndergaard, Mets
If I told you a New York Met was going to win the NL Cy Young in 2016, you’d probably guess Matt Harvey or Jacob deGrom. I wouldn’t blame you. They’ve both been excellent for the Mets over the last few seasons. And honestly, either one could certainly find themselves taking home some hardware when the season is over. They really are in that class. But Noah Syndergaard might be there too.

Syndergaard has three above average pitches, including a double plus fastball that averaged 97.1 mph last year. He also struck out 27.5% of batters faced. That’s well above average (19.9% in the NL last year). He ended last year with a 3.24 ERA and 3.25 FIP, and we’re not talking about a small sample size either – he made 24 starts tossing 150 innings in total. And all of this is in line with his minor league numbers: 27.0 K%, 3.16 ERA.

Between AAA and MLB last year, he made 29 starts and pitched in 179.2 IP. That suggests there won’t be any kind of innings limit or concern about his ability to make 30+ starts. Even though pitcher wins shouldn’t matter, they probably still hold water with the voters. There shouldn’t be concern here either though because Mets should be a highly competitive team this year. It’s all lined up for a special sophomore season for the 23 year old righty. 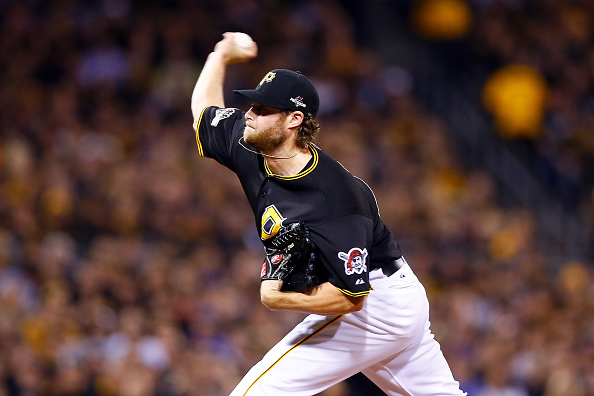 PITTSBURGH, PA – OCTOBER 07: Gerrit Cole #45 of the Pittsburgh Pirates throws a pitch in the first inning during the National League Wild Card game against the Chicago Cubs at PNC Park on October 7, 2015 in Pittsburgh, Pennsylvania. (Photo by Jared Wickerham/Getty Images)

Gerrit Cole , Pirates
Speaking of highly competitive, the Pirates were one of the best teams in baseball last year and things shouldn’t be any different this year. That bodes well for their ace Gerrit Cole. At 25 years old, he’s quietly put together three solid seasons for Pittsburgh, but last year he took things to another level.

While it was his third season pitching at the major league level, it was his first full season. He made 32 starts, throwing 208 innings, striking out 202 batters, and logging a 2.60 ERA and 2.66 FIP. He also owned a 19-8 record. His season was excellent no matter which way – old school or new – you look at it.

Like there is no reason to believe the Pirates can’t repeat their success, there’s no indication Gerrit Cole can’t be just as good as he was last year. His strike out numbers might not be as gaudy as a Syndergaard or Kershaw, but the overall production should be in that upper echelon range. With the spotlight now squarely aimed the Pirates way, Cole won’t be overlooked much longer. 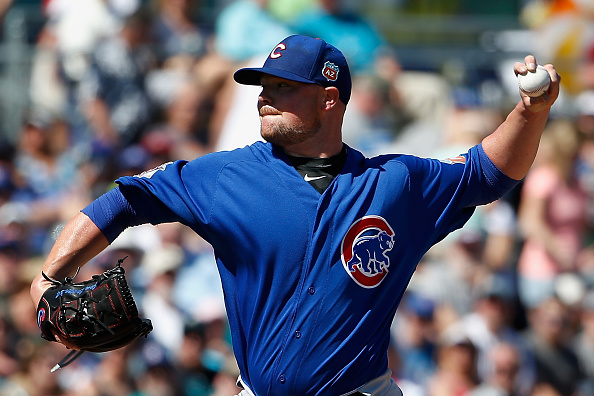 PEORIA, AZ – MARCH 10: Starting pitcher Jon Lester #34 of the Chicago Cubs pitches against the Seattle Mariners during the first inning of the spring training game at Peoria Stadium on March 10, 2016 in Peoria, Arizona. (Photo by Christian Petersen/Getty Images)

Jon Lester, Cubs
Here we find ourselves looking at the completely opposite side of the age scale. The rest of the pitchers on this list aren’t close to sniffing 30 years of age, but Lester has already crossed that benchmark. The 32 year old will be entering his 11th major league season, and he’s been worth over 5 fWAR in each of the last two seasons. So how can he be on the “dark horse” list? Two words: Jake Arrieta.

If someone is betting on a Cubs pitcher to win the award this year, it’s probably going to be on last year’s Cy Young winner. It would be a reasonable bet too. He’s great. But so is Jon Lester. He’s made over 30 starts in each of the last eight seasons. He threw over 200 innings all but one of them. And over the last two seasons, he’s struck out just over a batter per inning. Last year, he owned a 25.0% K-rate.

Since he is post-30, there is some concern that he’ll start to lose his stuff. But if that’s going to happen, there’s no evidence of it I can find. His average fastball velocity last year was 92 mph, which was is more or less where it’s been since 2011. There’s been an ever so slight decline, but we’re talking fractions of a mile per hour. And command is a strength for Lester which helps mitigate minor velo loss.

The Cubs might be the best team in baseball, so win-loss record shouldn’t be a problem for Lester. His teammate is probably the bigger obstacle. 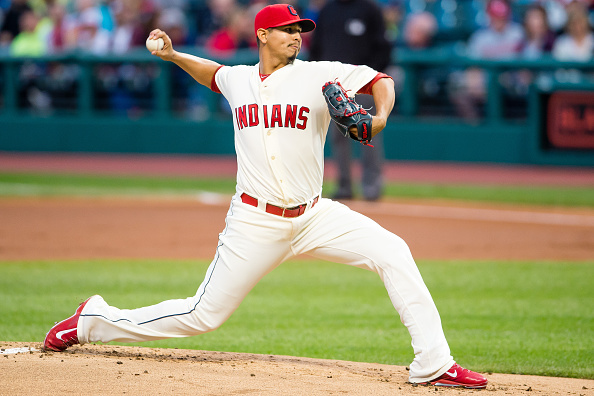 Carlos Carrasco, Indians
You forgot about Carlos Carrasco, didn’t you? It’s okay, I don’t really blame you. He debuted in 2009 and we’ve been waiting for a breakout ever since. But here’s the thing – the breakout came last year. It was just masked by a somewhat unremarkable 3.63 ERA. But it wasn’t his fault, according to his 2.83 FIP.

If you ignore the ERA and just look at his peripherals, he looked amazing last year. He had a whopping 29.6 K% (league average in the AL was 20.1%). He also had a sparkling 5.9 BB% (lg avg was 7.6%). His 23.7 K%-BB% was the second best mark among qualified starters in the AL last year. Chris Sale’s 27.2% was the best and last year’s AL Cy Young winner, Dallas Keuchel, had the 7th best mark with an 18.1%. There should be no question about Carrasco’s ability any longer.

There might be a question about his ability to eat innings. Last year, he recorded career highs in games started (30) and innings pitched (183.2). Right or wrong, he’s probably going to need over 200 innings to garner serious consideration for top honors. 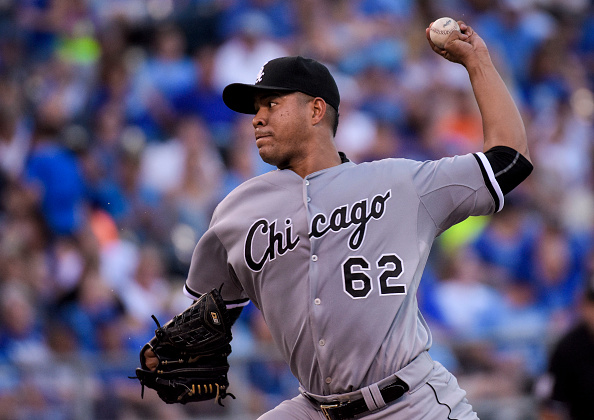 KANSAS CITY, MO – SEPTEMBER 05: Jose Quintana #62 of the Chicago White Sox throws against the Kansas City Royals during the third inning of a game at Kauffman Stadium on September 5, 2015 in Kansas City, Missouri. The White Sox won the game, 6-1.(Photo by Reed Hoffmann/Getty Images)

Jose Quintana, White Sox
Jose Quintana may be the most underrated pitcher in baseball. It doesn’t help that he pitches on the same team as Chris Sale. And there probably is still going to be buzz surrounding the young Carlos Rodon in his second season at the major league level. But make no mistake, Quintana belongs in the conversation for No. 2 on that team.

He’s coming off three consecutive 32+ start seasons in which he logged at least 200 innings in each. The last two seasons, he’s hovered right at 3.32 ERA, but his FIP has been a bit better (2.81 and 3.18 respectively). If his results can finally match his FIP, he could finally find himself out of Chris Sale’s shadow.

There are two other major obstacles he faces though. One is out of his control. The White Sox tried their hardest to improve their team over the offseason, and they did a nice job too. But there are still very real questions about just how competitive they’ll be. If the answer is “not very,” it could hurt his win-loss record. The other issue is with strikeouts. He’s only had around league average strikeout rates over his career. He walks very few batters, but the voters don’t tend to notice that unless it’s a negative. Quintana isn’t likely to suddenly increase his K% in his fifth major league season, and that could be the difference between being really good or being the Cy Young recipient. 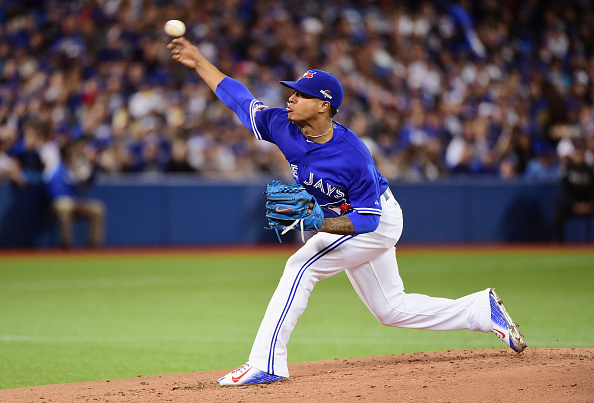 TORONTO, ON – OCTOBER 19: Marcus Stroman #6 of the Toronto Blue Jays throws a pitch in the second inning against the Kansas City Royals during game three of the American League Championship Series at Rogers Centre on October 19, 2015 in Toronto, Canada. (Photo by Harry How/Getty Images)

Marcus Stroman, Blue Jays
Okay, I’ll admit that I’m really reaching here, but I’m a sucker for a comeback story. Stroman was a much hyped pitching prospect. He owned an impressive 28.8 K% during his short minor league career. It was short because he made his major league debut two years after being drafted. He started 20 games that year with a 3.65 ERA and 2.84 FIP. His gaudy strikeout numbers weren’t there, but if that’s what it looks like when he struggles, you can imagine what people hoped he’d look like when he was on point.

That’s exactly what people were hoping to see last year. But baseball is a cruel bastard of a sport, and Stroman missed most of 2015 after tearing his ACL in Spring Training. Despite the major injury, he was able to come back and pitch in 27 innings at the end of the year. Now he’s fully healthy and has been named the Opening Day starter for the Blue Jays. Could we finally see what a full strength Marcus Stroman looks like?

Maybe? I don’t know. But I do know that if we do, and if it looks anything like what it did in the minors, Toronto’s rotation is going to have a potential Cy Young contender. We know the offense is going to give him a chance to win every game he starts, so that won’t be a problem. The major question will be health and endurance. It’s possible he’s on an innings limit and that could be enough to derail his chances at getting the award, no matter how good he is.