The 2016 Cleveland Indians were the most successful version of the team since 1997 and, like that team, lost the World Series in extra innings of Game 7. As we’ve seen over the last two decades, that kind of loss can lead to quite a bit of not only devastation, but hindsight, as fans look at every single pitch of every loss trying to see how things could have been different.

In a similar mind, but on a broader scale, there were mistakes made long before the World Series that had a cumulative ripple effect and ultimately lead to the Indians’ Game 7 loss.

Almonte was never more than a AAAA player in his career before coming to Cleveland for Marc Rzepczynski in 2015, but once the Indians gave him a home and a starting job in center field, he finally showed the potential that caused the Yankees to sign him out of the Dominican Republic back in 2005. He had dealt with addiction in his past, but moved beyond those shadows in Cleveland, hitting .264 with five home runs, five triples, and nine doubles in 51 games at the end of the season. With Michael Brantley dealing with a shoulder injury, Almonte was essentially guaranteed a spot on the roster to start the 2016 season and likely a starting job.

On February 26th, however, he was suspended for PED use and missed the first half of the season and, consequently, the playoffs. When he returned to the club after July, he had a short readjustment period, but hit .273 with 19 doubles over his final 62 games of the season. It was the foreknowledge that he would not be eligible for the post-season that lead to the trade for Coco Crisp, which ended up working out well. But not having a center fielder potentially cost the Indians the series, when Tyler Naquin blew a play in center field in Game 6 that lead to two runs scoring and the complexion of the game completely changing.

One effect of the suspension was that Naquin would make the team out of Spring Training on the back of a tremendous spring. He would play well early, then after a short return to Columbus, would enter himself into the Rookie of the Year conversation by hitting .328/.390/.602 through his first 50 MLB games. At the time, those who watch the Indians closely were already worried about his one flaw. Like Kit Keller before him, Naquin could lay off, or hit, the high ones.

It didn’t take long for American League pitchers to discover this fact that could be found in only a few moments on BrooksBaseball.net. It turned out, in fact, that Naquin actually just struggled against fastballs anywhere. From July 1st on, he batted .275 and struck out 68 times to just 24 walks. This trend continued into the playoffs, as he was unable to make contact with even the slowest fastball and went 4 for 23 with 14 strikeouts. His only meaningful hit came against Boston in the ALDS, and he went 1 for 7 with 5 K’s in the World Series. In Game 7, he would be benched for the first time in months against a right-handed starting pitcher in Kyle Hendricks.

Missing Almonte would hurt again in Game 7 when Terry Francona pulled Coco Crisp for Michael Martinez so he wouldn’t lose the game on a sac fly to short left. With Almonte starting, that move would have never have happened and Martinez wouldn’t have been the final out in the World Series. Of course, there was one other decision that made that happen. 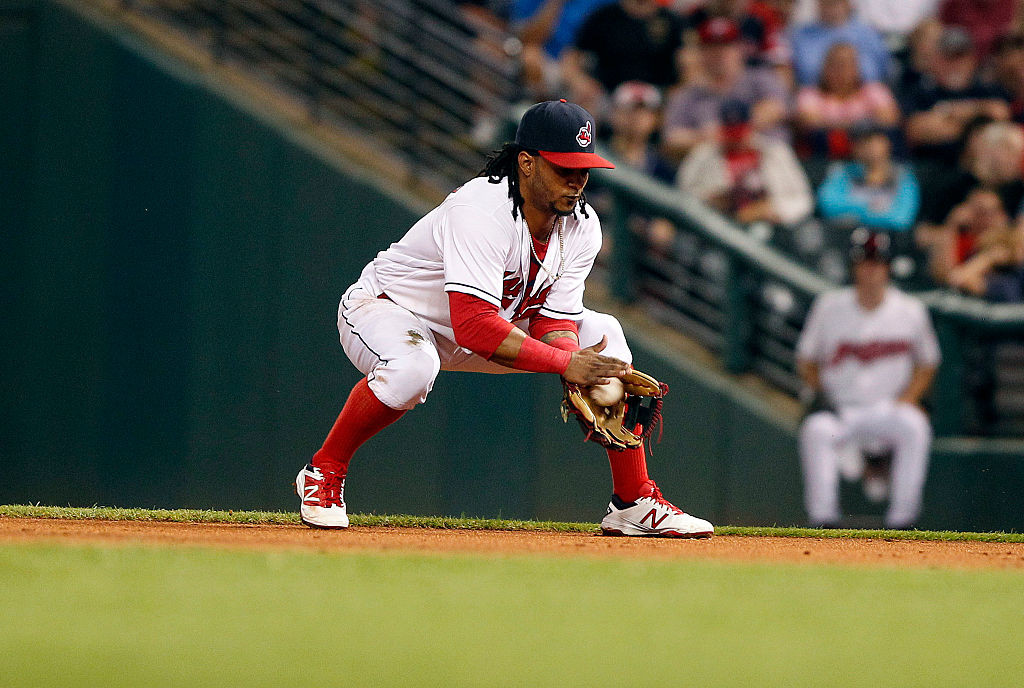 CLEVELAND, OH – AUGUST 13: Michael Martinez #1 of the Cleveland Indians tfields a ground ball against the Los Angeles Angels of Anaheim during the fourth inning at Progressive Field on August 13, 2016 in Cleveland, Ohio. The Indians defeated the Angels 5-1. (Photo by David Maxwell/Getty Images)

Yandy Diaz not getting a September call-up

National fans may not be familiar with Diaz, as he’s not a top prospect, but he did start in the Futures Game this summer and hit .325/.399/.461 with 32 extra base hits in 95 games in AAA this year. He’s a third baseman by trade, but has been working on his versatility and played games at second base and in the outfield. Combined with Jose Ramirez, who is the normal starting third baseman, they could cover every position on the diamond except the battery.

With players like Jesus Aguilar, Austin Adams, and the injured Dylan Baker on the 40 man roster, there was no reason he couldn’t have been added and brought to the majors for his debut on September 1st. Instead, the Indians stuck with Martinez as their utilityman because they were worried Diaz wouldn’t get enough playing time. This completely backward logic lead to Diaz sitting at home (actually he played at least one game for the instructional league team in Arizona, a league for low A and rookie players) and Martinez not only playing in September, but taking pivotal plate appearances in the World Series.

In the history of baseball, 4,588 non pitchers have had at least 550 plate appearances in their career. Of these, Martinez surpasses only 171 in career fWAR. The letters in that stat stand for wins above replacement and Diaz was not just any replacement, but one of the Indians’ top prospects who was coming off a great season in AAA. In fact, for comparison’s sake, Martinez also played for the Clippers in 2016 and hit .288/.351/.442 in 27 games. He was also released twice mid-season, first by the Indians, and then by the Red Sox and before being brought back to Cleveland.

This negative WAR player still made the Postseason roster as the Indians only backup infielder (he only played in the outfield in the Postseason) and unsurprisingly, he went 0 for 4 in his playoff at bats, striking out in his first three before grounding out to Kris Bryant to make the last out of the season. Martinez had to take the last at bat of the World Series because the bench was empty, but that wasn’t a managerial mistake by Francona – it was simply the result of two mistakes earlier in the season.