No team spent as many free agent dollars on their rotation as the Giants did this past winter, and no team had as many questions about their rotation when Spring Training started either. The guys the Giants spent big for – Johnny Cueto and Jeff Samardzija – both had serious question marks. Talented pitchers, yes, but both were coming off of sub-par years that left doubt as to whether or not they’d live up to their big contracts.

Well the results are in after the first month of the season, and they’re probably not what many expected: Cueto and Samardzija have been fantastic for the Giants, helping them stay afloat in the NL West while the rest of the rotation gets up to speed. So far, they’ve been worth every penny.

Cueto has looked like the pitcher he was in Cincinnati, when he put together a few Cy Young-worthy seasons and was one of the top starters in the league. He’s been the Giants’ best starter by far, which is saying something considering Madison Bumgarner is in the rotation, and he seems to have put whatever was ailing him in Kansas City in the rear view. Maybe all he needed was a move back to the National League, or maybe his arm really wasn’t totally healthy in the second half last year; whatever the reason, Cueto again looks like one of the league’s best pitchers. 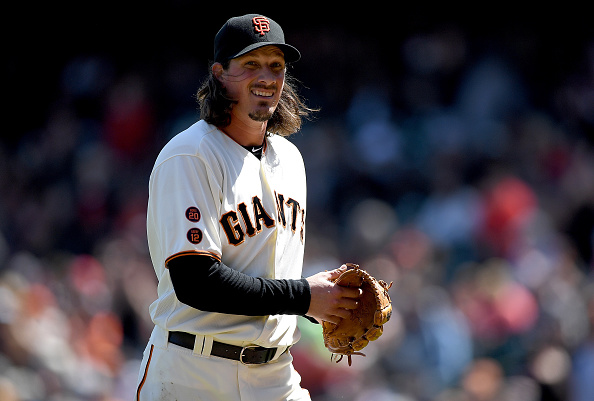 SAN FRANCISCO, CA – APRIL 27: Jeff Samardzija #29 of the San Francisco Giants walks off the field after he was taken out of the game against the San Diego Padres in the top of the sixth inning at AT&T Park on April 27, 2016 in San Francisco, California. (Photo by Thearon W. Henderson/Getty Images)

There were probably more questions around Samardzija after his nightmare season last year, considering his stuff was still good but the results definitely were not. His results have been encouraging so far: he’s keeping the ball in the park and for the most part has gone deep into games, saving the Giants bullpen from overuse. Like Cueto, Samardzija seems to be benefiting from a move back to the NL. His stuff still looks sharp and the Giants’ coaching staff is getting a lot out of him.

What the Giants probably didn’t expect was that the rest of their rotation would be so shaky early on. Bumgarner’s results don’t look bad – 2-2, 3.64 ERA, 38 Ks in 29.2 IP – but he hasn’t looked like himself, battling injuries to his rib cage and foot while also trying to fix his mechanics. He’s been good, but not at the level the Giants might expect. Jake Peavy and Matt Cain have been victims of bad luck, but both of them are sporting ERAs north of 6.00 and only one of them (Peavy) has gone longer than six innings in a game this month. That’s led to a taxed bullpen and a lot of early holes for the offense to dig out from.

It’s still early, and there’s still plenty of time left for the rotation to sort itself out. But Cueto and Samardzija have so far lived up to their billing, giving the Giants the rotation stability they so desperately sought over the winter when they spent nearly $200 million to fix things.

There’s also a sense that the rest of the question marks will sort themselves out. The Giants know that Bumgarner will likely get back to being Bumgarner, and his last start was a step in the right direction. They also know that Peavy has been a slow starter and that Cain is still getting his feet back under him on the mound. And if things don’t improve, they know that they have major league-ready starters in Chris Heston and Clayton Blackburn waiting in Triple-A. All of these are questions they likely know the answers to.

They didn’t know the answers to the questions surrounding Cueto and Samardzija when the season began, and so far both of them have put those questions to rest. If the rest of the rotation can catch up, the Giants are going to be a dangerous team this summer.