The Atlanta Braves made the two biggest splashes in the early days of MLB free agency last week, signing veteran starting pitchers Bartolo Colon and R.A. Dickey to a pair of one-year deals (though Dickey’s deal also contains a 2018 club option) for a combined total of $20 million. The signings do a lot to further general manager John Coppolella’s notion that the Braves will be a contender in 2017. But will they actually contend in reality?

In short, not right now. Nobody is going to confuse Colon and Dickey for Noah Syndergaard and Aaron Sanchez. However, the two pitchers do fill holes in a Braves rotation that was wretched last season. Atlanta used a total of 16 starters in their 161 games, and their 4.87 ERA was better than only the Diamondbacks and Twins in all of baseball. Eating innings was also a problem for the Braves. Their rotation’s 880 1/3 innings ranked ahead of just the Marlins, Pirates, Dodgers (yes, the NL West champion Dodgers), and Reds in the National League.

Colon and Dickey will help the Braves in both of those regards. Dickey has qualified for the ERA title (at least one inning pitched per team game played) in every season since 2010, crossing the 200-inning mark in five of those seven seasons. His highest ERA over those seven seasons? 4.46, this past year in the tough AL East. As for Colon, the 43-year-old has qualified for the ERA title in five of his last six seasons, falling short in 2012 because of a PED suspension. His highest ERA in that time period? 4.16 a year ago.

But while it’s fine for one to be skeptical of this duo, you also have to realize just how dire the straits were for the Braves last season. Only three starters had an ERA under 4.00 for the team — and two of those (Josh Collmenter and Lucas Harrell) made just eight starts between them. Another two starters pitched in with an ERA under 5.00. Every other starter the team used pitched to an ERA over 5.00, including Matt Wisler (5.03 in 26 starts), Williams Perez (6.04 in 11 starts), and Aaron Blair (an ugly 7.59 in 15 starts). 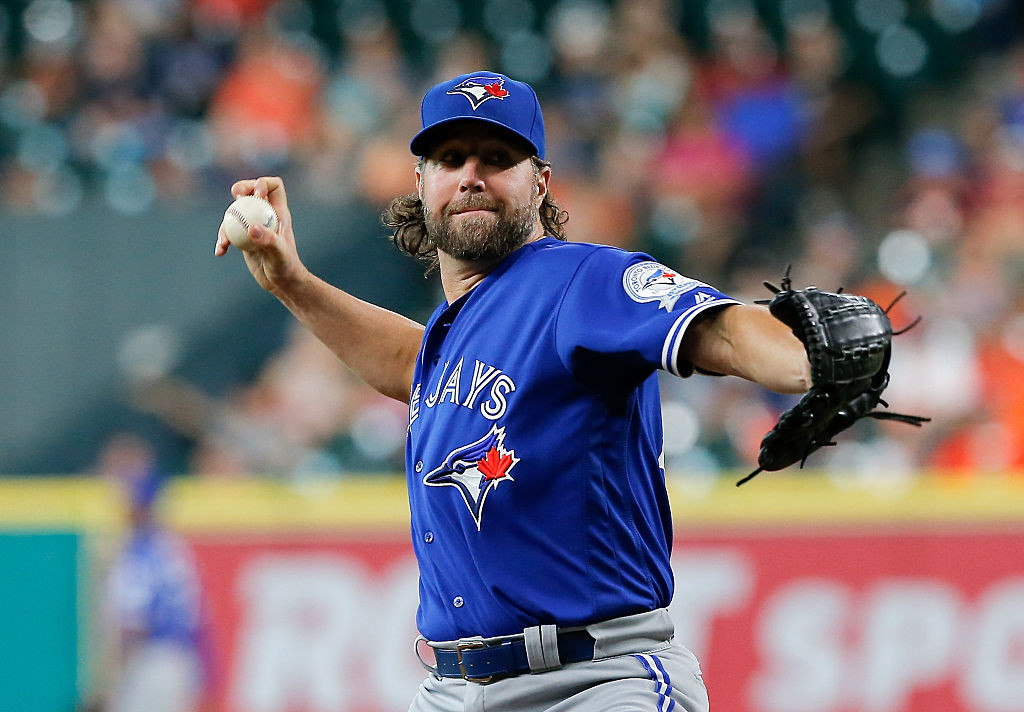 HOUSTON, TX – AUGUST 02: R.A. Dickey #43 of the Toronto Blue Jays pitches in the first inning against the Houston Astros at Minute Maid Park on August 2, 2016 in Houston, Texas. (Photo by Bob Levey/Getty Images)

If you slot Colon and Dickey into two of those rotation spots along with returnees Julio Teheran (3.21 ERA in 30 starts) and Mike Foltynewicz (4.31 ERA in an up and down 22 starts), you have the makings of a rotation that looks… well, downright adequate. Instead of having to fill three slots behind those two with a cavalcade of guys like Blair, Wisler, and Perez, those guys are competing for one spot, with the others being banished to AAA or the bullpen.

And speaking of that Braves bullpen, it wasn’t all that bad last season. Atlanta’s relievers had a 3.95 ERA on the year, a hair above the MLB average of 3.93. The Braves will bring back their best relievers, including Mauricio Cabrera (2.82 ERA in 38 1/3 innings), closer Jim Johnson (3.06 ERA in 64 2/3 innings), and former LOOGY Ian Krol (3.18 ERA in 51 innings). With a better rotation, the Braves (in theory) won’t find it necessary to burn through lesser relievers in the middle innings, which will create less churn on the shuttle to AAA Gwinnett.

While the $20 million committed to these two older pitchers seems like a lot, they were two of the top 10 best starters on this extremely weak market, and the commitment is only for one year. Plus, Atlanta had money to spend. Before signing these two, the Braves had just $57 million committed to their payroll and only six players are eligible for arbitration this offseason. It’s not like the Braves’ payroll was stretched thin going into the winter.

So… will the Braves contend this year? Probably not. The National League is very top-heavy, and one of those top-heavy teams resides in the NL East. But the other three teams in the division all have their own questions, and if the Braves came out ahead against the Marlins, Mets, and Phillies, they could easily contend for the NL’s second Wild Card. That’s all you can ask. Keep the team moving forward while not bogging it down long-term. If the Braves turn themselves into contenders next season with the players on the roster right now, that’s just an added bonus.