Studying kickers and when he should ice.

Santa Coach is coming… to town.

This isn’t about being naughty or nice, as you can see from the adjusted song lyrics above. This is about making some basic game management decisions as a coach. Santa Coach is here to deliver some football advice before he makes worldwide deliveries of footballs (and countless other gifts to people around the globe).

The Student Section reviewed day one of the bowls here. The coach who really got it right in the next group of three bowls (played on Dec. 22 and 23) was Navy’s Ken Niumatalolo. 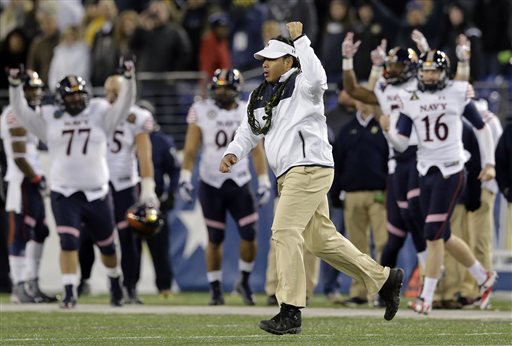 Ken Niumatalolo and Santa Coach are on the same page when it comes to icing kickers.

In the final half-minute of Navy’s sloppy but tense Poinsettia Bowl battle against San Diego State on Tuesday, Niumatalolo faced a choice with 24 seconds left and SDSU preparing for a 34-yard field goal, trailing the Midshipmen by a 17-16 score.

Navy had two timeouts, but not much time left if San Diego State made the kick for a 19-17 lead. One could have made the argument that by keeping two timeouts, Niumatalolo could have kept the middle of the field in play on two, maybe even three, passes in the final 20 seconds, calling a timeout multiple times and giving his offense a better chance of kicking a field goal. That’s a legitimate argument.

However, Niumatalolo thought it was worth it to use one of his two timeouts on the spot to ice SDSU kicker Donny Hageman, who had made three field goals earlier in the evening.

There are two reasons Niumatalolo made the right move. First, with only 20 seconds after the kick, Navy’s odds of being able to get the 45 or more yards needed to reach field goal range were remote. Navy had a chance, but not much of one, especially with its passing game. Had there been 50 seconds left, yes, holding onto that timeout would have meant something different… and much more valuable. With under 25 seconds, though? It made sense to apply game pressure on Hageman, even at the expense of a timeout. An added note: Since Navy did have two timeouts at the time, it still had one in the pocket in case the kick was good and Navy completed a long downfield pass in bounds. Niumatalolo enjoyed some margin in that regard. If he had just one timeout before the field goal attempt, that also would have adjusted the calculus.

The second reason this was the right move is that Niumatalolo properly observed the two rules of icing kickers:

A) He did not allow the kicker to get in a practice kick.

B) He did so before a short kick, not a long one.

Coaches make the huge mistake of calling their “ice timeout” late enough that the kicker is able to flush out some nerves by getting in a practice kick. The simple act of being able to swing the leg into a ball — no matter where it goes — releases tension in the kicker. Icing attempts that do not prevent practice kicks only serve to help the kicker. Niumatalolo prevented the practice kick (at least to the extent that Hageman did not try one — he might have been able to, but he didn’t).

Sure enough, Hageman did not hit the ball solidly, the odd-shaped pigskin fluttering to the right of the far-side upright.

The move made sense in light of time-and-score plus available timeouts remaining. The execution of the icing attempt, though, was what really made the decision work for Navy and its coach, whose timeout against Army (on a fourth and one) turned around that game as well (on Dec. 13 in Baltimore). Ken Niumatalolo can now enjoy the stocking stuffer of a second straight bowl win and revenge for San Diego State’s victory in the 2010 Poinsettia Bowl against his Midshipmen. 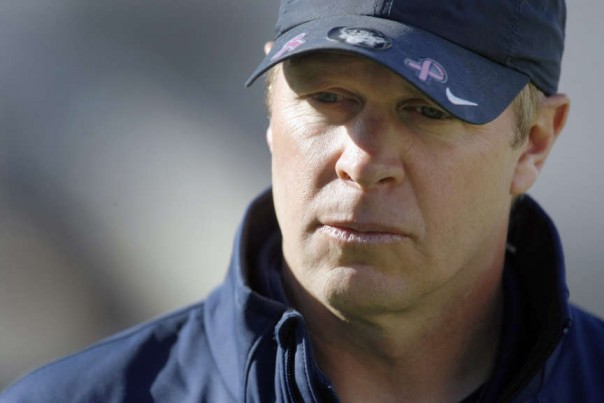 BYU head coach Bronco Mendenhall — like Ken Niumatalolo, a Mormon — did not follow Santa Coach’s advice on icing kickers. When you don’t ice properly, you get burned.

If one Mormon man in a position of FBS power followed Santa Coach’s advice on icing kickers, another one did not.

In the Miami Beach Bowl, Mendenhall had already botched an endgame situation by trying to ice Memphis’s kicker on an extra-point attempt with 45 seconds left in regulation. BYU was about to be tied at 45, so Mendenhall’s use of timeouts deprived his team of the ability to stop the clock on what could have been a game-winning drive. When taken into overtime, Mendenhall had a chance to mend his ways, but he didn’t, and the Cougars lost as a result.

Here was the situation: BYU had kicked a field goal on the first possession of the first overtime inning. Memphis lined up for a 55-yard field goal to tie and prolong the game. Mendenhall ignored the “short kicks and not long ones” rule of icing kickers. That was bad enough. What he also failed to do was to call the timeout early enough to deny Memphis kicker Jake Elliott a practice kick. The kick was ugly — the ball was severely sprayed to the left — but practice kicks don’t have to be good; only the real thing has to be hit perfectly. Elliott pushed a lot of anxiety out of his body and his leg on that practice kick. His subsequent live-action boot was a John Daly tee shot on a par 5, a 400-yard blast down the fairway, center-cut.

There are no guarantees in life, but the chances are that if Mendenhall had either:

… BYU would have won the game.

The Miami Beach Bowl and the Poinsettia Bowl were two totally different games in terms of the balance between offense and defense. However, they were both decided in large part by two coaches and the ways in which they chose to ice a kicker.

Take it from Santa Coach: There’s a right way to do ice, and a wrong way. You saw textbook examples of the positive and the negative over the past few days of bowl games.

Merry Christmas to all, and to all, a good field goal flight!