Linking conference strength to bowl results is always a tenuous, risky thing to do — it can be done, but it requires great care and an awareness of limitations.

The reasons for being cautious about touting — or downgrading — a conference based on bowl performance are obvious. They do, however, demand some care and attention in every bowl season.

The foremost quality which always helps in a bowl-and-conference-strength discussion is no different from the quality which brings forth a responsible discussion of conference strength during the regular season: attention to detail.

You might file this under “easy to say, hard to do,” but the concept of an evaluation is simple enough: You just need to assess the quality of a team or conference. Does it demonstrate its excellence relative to the competition? Does it demonstrate its inferiority relative to the competition? If a team or conference wins, does it do so by being great… or merely by not being as bad as the opponent(s)?

That last question is an important one, because a survey of this regular season in college football would strongly suggest that there’s no truly great team, unlike 2013 Florida State or 2012 Alabama. The SEC has retained its place as the best conference in college football, but only because no other league has been able to wrest away supremacy. In other words, it’s not as though the SEC is the best conference in 2014 because it has risen higher; it is the best because the other conferences have either declined or remained stuck at a given level of quality.

Here’s an illustration of that last point: Alabama is the best team in the SEC in 2014. Yet, the Crimson Tide were legitimately, consistently wobbly in narrow wins over Arkansas and LSU. They gave up 44 points (36 when the game’s outcome was in doubt) and coughed up three interceptions against Auburn… and lived to tell about it. Call this version of Alabama resourceful and resilient. Call it the product of one of Nick Saban’s best coaching jobs (which says a lot about Saban). Don’t call this Alabama team great, however. In 2014, the SEC wasn’t great at all… it just wasn’t as bad as other conferences.

The ACC Atlantic carried the conference and gave the ACC a very solid season. However, the 6-6 mediocrity so prevalent in the ACC Coastal makes it hard to elevate that league above the SEC. Similar stories can be written about how the Pac-12 North and Big Ten West gave those conferences a lot of dead weight, such that the SEC’s lowly East Division isn’t an exceptional entity in 2014 — just about every conference had one bad division this year (even the Mountain West, with its subpar West Division). Yes, it would be very hard to call Mississippi State and Ole Miss great teams (as is the case with Alabama), but does any conference have a top four which can match Bama, Hail State, Ole Miss, and — for the sake of argument — a Georgia team with Todd Gurley healthy? No.

The Pac-12 has Oregon and the two Arizona schools as a fine trio, but UCLA’s disappearing act against Stanford makes it hard to say that the Pac has four particularly good teams.

The ACC can tout Florida State, Georgia Tech, and Clemson as upper-tier squads. Louisville might be a stretch… but this is why the Belk Bowl against Georgia is a game in which conference bragging rights seems particularly important.

The Big Ten’s claim to quality depth died when its West Division champion got routed, 59-0, by a team with a third-string quarterback. Credit Urban Meyer and the Buckeyes, by all means; let’s not say that Wisconsin should get off scot-free for such a stink bomb.

The Big 12 still had a better season in 2014 than it did in 2013, but Oklahoma and West Virginia suffered profoundly in November, taking down the quality of the league a notch.

As you can see, the SEC was hardly great, but the other conferences — which might have appeared ready at times to overtake the King of college football — could never quite orchestrate a clear palace coup. Can the narrative be re-written in the bowl season? Let’s take a look at what’s reasonable — and unreasonable — to claim in advance of these 38 postseason contests:

THE AMERICAN HAS TO WIN ONE OF TWO SPECIFIC GAMES

The American Athletic Conference — which likes to be called The American — faces two moments of truth in the bowl season. The champions or best teams in a league, when given matchups that are winnable at worst and favorable at best, need to come through. Therefore, league champion Memphis faces a certain degree of pressure in its bowl game against a Taysom-free BYU squad. Cincinnati — tied with Memphis in the conference standings but merely a “minority shareholder” of The American’s title due to a head-to-head loss to the Tigers — faces 6-6 Virginia Tech in the one bowl game featuring a three-win differential between two teams. The American has to get one of these two games to walk away with at least some sense that it achieved something of note in 2014.

You could throw UCF’s bowl game against North Carolina State into the mix, but the Knights proved themselves last year. It’s far more interesting — and uncertain — to look at Memphis and Cincinnati in the bowl spotlight.

THE MOUNTAIN WEST MUST SPLIT ITS FOUR FEATURED BOWLS

The Mountain West had four appreciably solid teams this season, all in the Mountain Division of the conference. Boise State, Utah State, Colorado State, and Air Force towered above the rest of the conference. Boise State is not expected to win the Fiesta Bowl against Arizona, but a Bronco upset would do wonders for the league’s reputation. Unless Boise State can pull off a shocker in a bowl game where it has been known to create surprises, the Mountain West will need its other three quality teams to produce two bowl wins.

Utah State should drum UTEP in the New Mexico Bowl (informally known to some as the Breaking Bad Bowl), so in many ways, the league wants a split of the Las Vegas Bowl and the Famous Idaho Potato Bowl. If either Colorado State (Vegas) or Air Force (Potato) can come through, the Mountain West will likely do no worse than 2-2 in this cluster of four games. A 1-3 mark — without a Boise State win in Glendale — would look very bad for a league whose biggest non-conference win was Colorado State’s road triumph at Boston College (a 7-5 ACC squad). 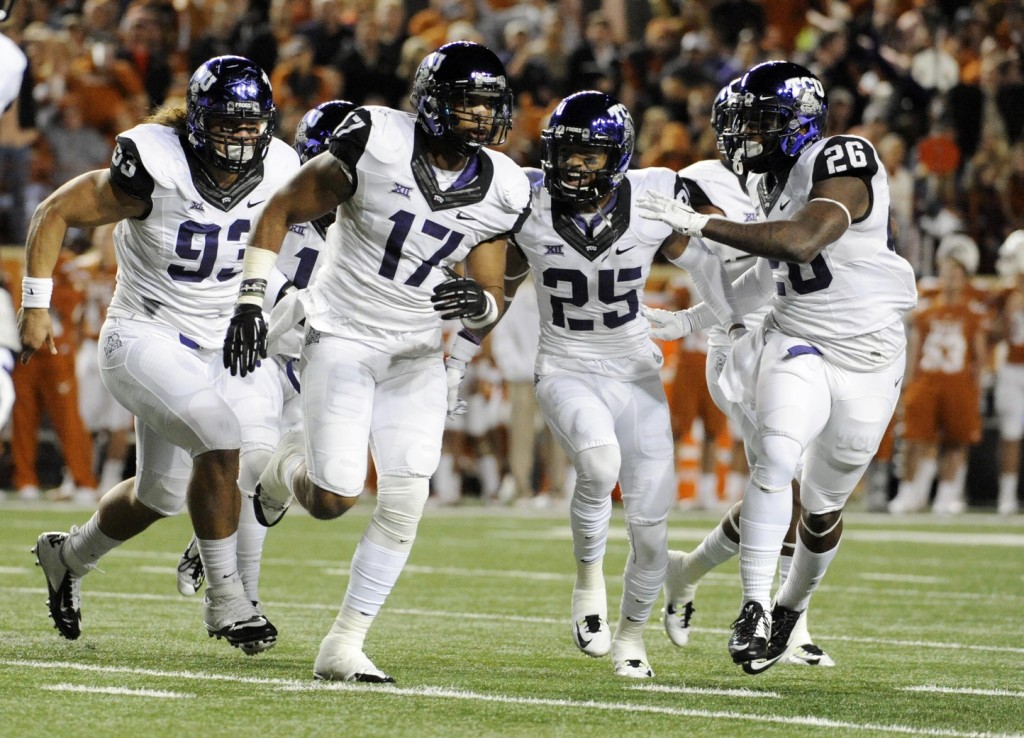 It’s just the way it is in bowl season. Some games will matter more depending on the result, due to injuries or imbalances in the matchups.

TCU got jobbed not only by the selection process for the College Football Playoff, but by its bowl placement as well. Facing a three-loss Ole Miss team puts the Horned Frogs in a position where they’re expected to win, but won’t receive a massive boost in national stature if they do.

TCU could have gained more from playing either Mississippi State or Michigan State, 10-2 teams that more centrally figured in their respective conference races this season (at least in the month of November). If TCU wins, it will merely do what it is supposed to. If Ole Miss wins, though, the Big 12’s reputation would take a huge hit. The result of the Peach Bowl will therefore matter more in the event of one outcome (Ole Miss winning) more than another (TCU winning).

Another conditional bowl game (in which one result matters more than another) is the Russell Athletic Bowl between Oklahoma and Clemson.

Oklahoma is getting Trevor Knight back at quarterback. Clemson, on the other hand, will not have Deshaun Watson under center due to injury. Oklahoma is therefore expected to win this game. Clemson losing should not be seen as a negative commentary on the ACC. OU losing, on the other hand, would represent a huge hit for the Big 12.

A third conditional bowl game is the Texas Bowl between Texas and Arkansas. Given the enormous amount of hype the Razorbacks received after their wins over LSU and Ole Miss in November — the Hogs were called “the team nobody wants to play” — it is only reasonable to expect them to defeat a mediocre Texas squad. If Arkansas’s 6-6 record really is that much better than Texas’s 6-6 mark, the Hogs should beat the Horns like a drum. If Arkansas wins, it is merely doing what everyone expects. If Texas wins, though, the SEC West takes a substantial hit. There’s simply more on the line for one team and conference than another in any “conditional” bowl game. 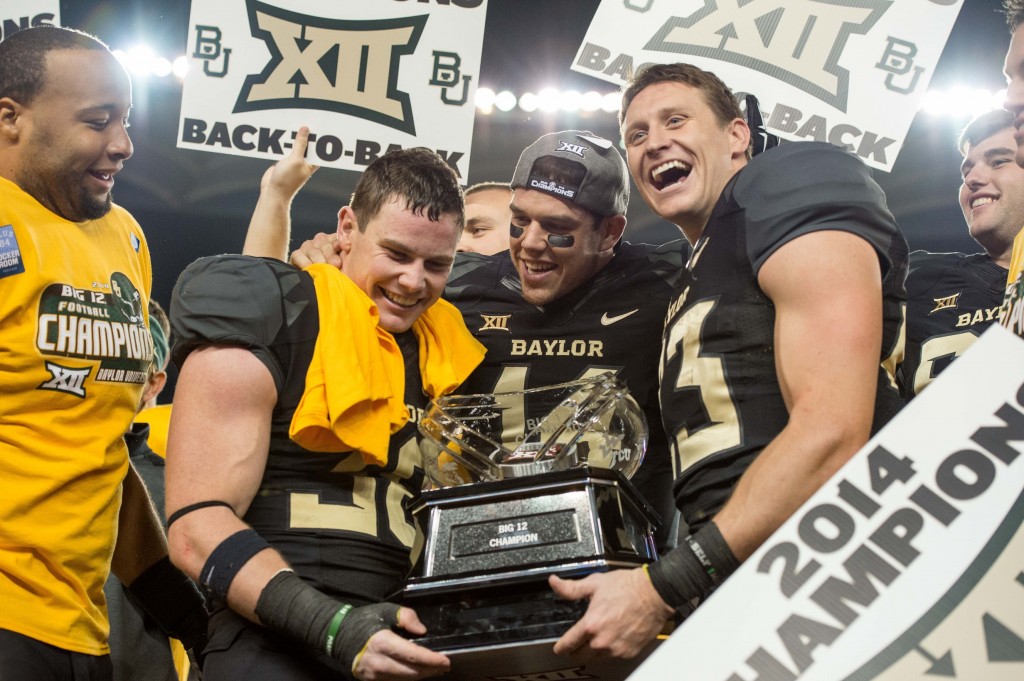 Baylor, which was torn to shreds by UCF in the 2014 Fiesta Bowl, badly needs to beat Michigan State in the Cotton Bowl — not only to bolster the Big 12 in comparison with the Big Ten, but to avoid an 0-for-2 albatross in premium postseason contests.

A “battleground bowl” can simply be referred to as a high-profile or otherwise revealing matchup between two teams in separate conferences that either achieved richly or are evenly matched… or both.

The five foremost examples of this kind of bowl, other than the playoff semifinals, are as follows:

ACC and SEC fans will be able to claim a crucial piece of argumentative leverage based on the outcome of this game. Both teams have suffered injuries at the skill positions (quarterback for UL, running back for UGA), so it’s not as though only one team has some issues to address in Charlotte.

The argument-settling bowl in college football’s underclass will also be a first-time bowl. NIU and Marshall are playing for the right to be seen as No. 3 in the Gang Of Five behind Boise State and Colorado State. The Huskies and Thundering Herd will also carry the banners for the MAC and Conference USA. Which league has the better champion?

If the ACC can get a Louisville win over Georgia and a Georgia Tech win over Mississippi State, the SEC — though better over the course of the regular season — would have to concede that the ACC has narrowed the competitive gap between the two conferences to a conspicuously small degree. The 2015 season would begin without the same kind of skepticism that has fallen upon the non-Florida State, non-Clemson precincts of the ACC for the past several years.

This is the best bowl outside the New Year’s Six rotation. It’s a huge game for two programs that finished with 9-3 records and a clear track record of beating just about everyone they were supposed to beat… but none of the giants in their respective conferences. Yes, conference strength as an extension of bowl performance is overrated… but not here in San Antonio.

Unlike TCU, which received a poor bowl placement in which the value of victory is little more than the avoidance of defeat, Baylor got the kind of non-playoff bowl that can carry a lot of meaning into the 2015 season and beyond.

Baylor and TCU were both snubbed for the playoff in favor of the Big Ten and Ohio State. Baylor gets to face the Big Ten’s other New Year’s Six team, Michigan State, on a big stage in JerryWorld. A win here would represent a powerful affirmation for the Bears and their national reputation. A win for Michigan State would substantially bolster the Big Ten while giving the Spartans their one marquee win of the season. This is certainly a bowl filled with tasty ingredients… specifically a tremendous amount of conference-related significance.