You know the names of many great coaches in college football, but what about the coaches who — while well known in the states or regions where they practiced their trade — lack national name recognition, especially among younger fans? Coaches receive so much scrutiny, often for not-so-pleasant reasons. Before the season begins, take a history lesson on 10 of the best coaches you might not have heard of. If you hail from a particular region, you’ve certainly seen some of these names before, but how many coaches can you identify across all regions?

He’s not as well known as the other coaches listed here, but Armstrong made a lasting impression on Utah football, leading the team for a quarter of a century. During his time as the head coach, the Utes won 13 conference championships (7 Rocky Mountain Athletic Conference, 6 Mountain States Conference), and earned bowl berths in 1938 and 1946. Utah was especially dominant early in Armstrong’s career, as the Utes lost just three conference games from 1925 to 1933.

Given the success of Commodore football, I’m surprised that McGugin’s hasn’t come up more often than it has. After all, every college football broadcast noted that James Franklin was the first coach to win 9 games at Vandy since 1915. Yet, almost none of them mentioned who the coach was when it happened.

While not a household name, McGugin was easily the best coach in Vanderbilt history. In his 31 seasons, the Commodores went undefeated four times (three of those included one tie), and won 11 titles. His 1904 squad was especially impressive, outscoring its opponents by a total of 474-4. 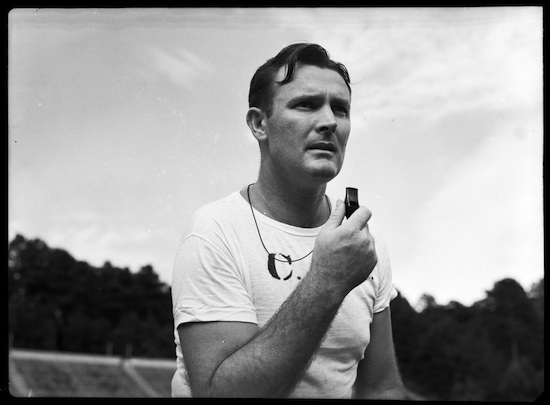 If you didn’t grow up in an Atlantic Coast Conference state and weren’t alive during the 1950s, you likely never knew how good Jim Tatum was as a coach. He certainly looks the part in this classic photo, but more than merely looking the part, Tatum knew his stuff cold. He has the accomplishments to show for it, too.

Admit it, when some of you saw this name, you immediately thought of Oakland Raider safety Jack Tatum.

All kidding aside, Jim Tatum was one of the most successful coaches of all time. After leading Oklahoma to a Gator Bowl victory, Tatum took over at Maryland, and turned it into a national powerhouse. During his nine seasons in College Park, the Terrapins went 73-15-4, captured three league titles, and the 1953 national championship.

*Note: Tatum actually won 100 games in his career, but North Carolina forfeited two wins in 1956 over an ineligible player. These games are counted as losses in the College Football Data Warehouse (which is an EXCELLENT source of information).

Not to be confused by a famous offensive coordinator with the same name, Dana Bible was a mainstay in college football for 33 years. His most successful stint was at Texas A&M, where he posted a 72-19-9 record, while capturing five Southwestern Conference titles and two national championships (1919 and 1927). He also guided Nebraska to six Big 6 titles in eight seasons, and led Texas to three Cotton Bowls in four seasons from 1942-1945.

In 18 seasons as a head coach, Crisler led both Princeton (1933, 1935), and Michigan (1947*) to national championships. He final team at Michigan might have been one of the greatest in history, thumping USC 49-0 to claim the national championship over Notre Dame, which was the No. 1 team in the country heading into the bowls. 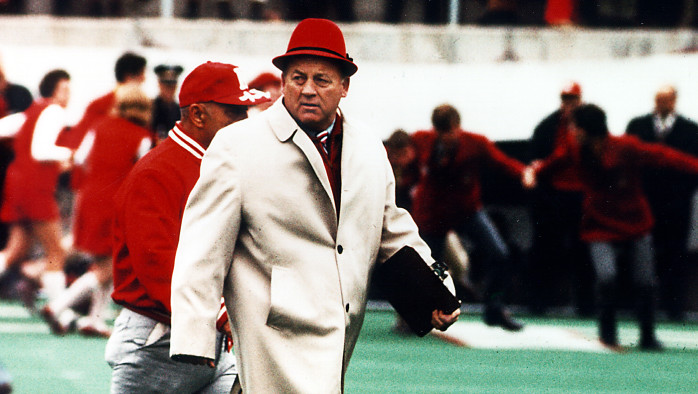 Before Tom Osborne reigned in Lincoln, Bob Devaney established Nebraska as a national powerhouse. Osborne is the name most closely associated with Nebraska football, especially as his successors have failed to maintain what he developed. Yet, all that Osborne developed flowed from what Devaney originally built. (Photo courtesy of the Nebraska sports magazine Hail Varsity)

Make no mistake about it: Devaney belongs in the “greatest of all time” discussion. However, the reason that he’s on this list is because he’s considered to be the second greatest coach in Nebraska history behind Tom Osborne.

With that said, Devaney’s resume is as distinguished as anyone else’s in college football. During his 11 years in Lincoln, he guided the Huskers to a 101-20-2 record, eight conference titles, and two national championships. Prior to that, he led Wyoming to four Skyline Conference championships in his five seasons at the helm.

Let’s be honest: Sutherland was the Nick Saban of college football between 1929 and 1938. During that span, the Panthers won four national championships (1929,1931,1936-37), and finished with one loss or fewer in eight of those nine years. In all, Sutherland won five national championships (including Lafayette in 1921), and led his team to four Rose Bowls – an honor that went to the best team in the East back then.

That’s quite a resume for a guy that’s better known for succeeding legendary coach Pop Warner at Pittsburgh.

History buffs and journalists are aware of the name, but most college football fans outside the Midwest don’t know the name Fielding H. Yost because he coached at the turn of the previous century.

However, if he had coached in the modern era, everyone would mention him in the same breath as Bobby Bowden and Tom Osborne. The architect of the “point a minute” offense at Michigan, Yost guided Michigan to ten Big Ten titles and six national championships during his storied tenure. His 1901 team turned in one of the most dominant performances in history, not only finishing the season undefeated but unscored upon (555-0). Michigan won the first Rose Bowl, played in 1902. The Wolverines thrashed Stanford, 49-0. The game stands alone not just in the history of the Rose Bowl itself (the game didn’t return until 1916, when it then became an annual part of college football), but for the dominance Yost’s team displayed on that day, over 110 years ago.

Woodruff was the gold standard for coaching in college at the beginning of the 20th century. To say that his University of Pennsylvania teams dominated college football is an understatement. In his 10 seasons there, the Quakers went 124-15-2, capturing the national championship in 1894, 1895, and 1897.

More impressively, his teams outscored their opponents 4,309 – 632 during his tenure, winning these contests by an average of 22.4 points per game.

*Note: Some data sources list Woodruff’s official record as 142-25-2. However, he left Carlisle after nine games to take a job in Washington, D.C. Ralph Kinney coached the team for the final five games compiling a 3-2 record.

Also, don’t mistake George Washington Woodruff with George Cecil Woodruff, who coached the Georgia Bulldogs from 1923-1927. At least one generally outstanding sports research website, Sports-Reference.com, blended the two Woodruffs together. This was not the same man.

When you think of Notre Dame and its greatest coaches in the context of the distant past, you probably go to Knute Rockne first. Among fans 50 to 60 years of age, Ara Parseghian might be the Fighting Irish coach who left the deepest imprint upon the human memory. Notre Dame fans born in the 1970s will always have an attachment to Lou Holtz. Yet, you could make the argument that Leahy is the greatest coach of all-time… and not just in South Bend.

To recap, that’s seven seasons without a loss in 13 years as a coach. That means his team was more likely to finish the season undefeated than to suffer a loss.

Not bad for a man who would fail to win the distinction of being Notre Dame’s most popular coach.