In the newly-expanded bowl lineup of 38 games, some of the four first-time bowls are what you’d expect in terms of the quality of matchup, especially since they’re all played before Christmas. It’s generally accepted that pre-Christmas bowls represent the undercard section of bowl season, with the matchups getting better after the final NFL Sunday of December.

And then there’s the first Boca Raton Bowl, to be played tomorrow afternoon — two days before Christmas, when a lot of Americans will be making the rush-hour commute home from work (6 p.m. Eastern, ESPN). The slotting of the game — in terms of the day of the week, the date on the calendar, and the kickoff time — screams lower-tier matchup.

The combined record of the Northern Illinois Huskies and the Marshall Thundering Herd: 23-3.

This isn’t a New Year’s Day bowl. It’s not even a post-Christmas December bowl.

It’s certainly one of the 10 best bowl matchups on the board, which means it’s one of the four best non-New Year’s Six games on the bowl docket. No, that’s not a fact — it’s simply a strongly-held opinion — but there’s a very simple reason why this game deserves a great deal of attention. 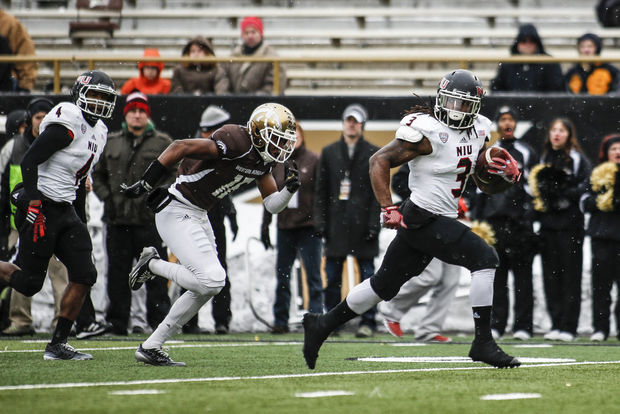 Northern Illinois has not fared well in its last two bowl games. Journeys to Florida and California have been enjoyable for NIU fans… until kickoff time. Can NIU enjoy not just the build-up to a sunshine-filled bowl, but the game itself?

THE ARGUMENT SETTLER: WHY NIU-MARSHALL PACKS A PUNCH

The fundamental reason why the College Football Playoff is an automatic upgrade over the BCS is that we, as a nation of fans and pundits, get two main-event semifinals before the title game. Two more argument-settling contests precede the final argument on Jan. 12. Football is a big-game sport — it is the one-time, put-up-or-shut-up sport which stands apart from the best-of-seven series that decide other pro sports’ major championships. College football has operated at a deficit throughout most of its history, in that most of its seasons have left at least one major argument-settling game unplayed. This is a point which doesn’t require much elaboration.

Once in a while, a season works out perfectly, such that two and only two teams are left on the mountaintop, and they get to resolve a debate: Alabama-Miami in the 1993 Sugar Bowl; Florida State-Virginia Tech in the 2000 Sugar Bowl; Ohio State-Miami in the 2003 Fiesta Bowl; Texas-USC in the 2006 Rose Bowl. These seasons, though, are the exceptions. Most of the time, a season leaves major games unplayed, unactualized, unable to be brought onto the gridiron. Football and its fans live and breathe for these moments. When they arrive, they represent appointment viewing.

That’s what we have here with Northern Illinois and Marshall. 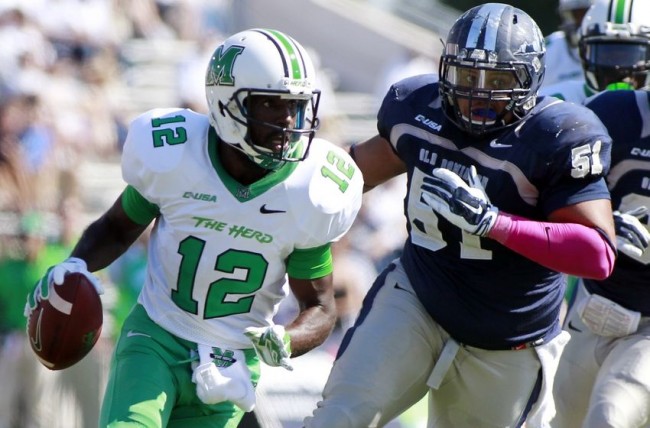 Marshall and quarterback Rakeem Cato would have wanted to be in a New Year’s Six bowl, but playing MAC champion Northern Illinois gives the Thundering Herd a test worthy of a postseason game.

The Northern Illinois Huskies have won at least 11 games in each of the past five seasons, making the Mid-American Conference Championship Game every time. Under three separate head coaches — Jerry Kill, Dave Doeren, and now Rod Carey — the Huskies have become a Gang Of Five superpower. They made history as the first (and still only) MAC program to make a BCS bowl. NIU’s championship pedigree is hugely impressive, to the point that it exceeds the body of work compiled by every other Gang Of Five program other than Boise State over the past five years.

UCF, Cincinnati, Louisiana-Lafayette, Houston, Bowling Green, and Marshall — these G-5 programs have all achieved richly in the past five years, but none with the consistency of NIU or Boise State. When 11 wins is not a ceiling but a floor, and it’s sustained across multiple quarterbacks and coaching staffs, it’s clear that a program has attained a level of entrenched superiority, lifting it a cut above the competition in its corner of the country. Don’t focus on questions of cross-conference comparisons — the MAC should not be held to the same standards of the Big Ten or the ACC. What Northern Illinois has done since 2010 has been nothing less than remarkable.

and yet… (pregnant pause)

Northern Illinois, this enduring force among college football’s underclass, is a 10-point underdog in Boca Raton.

That tells you a lot about the way Marshall is regarded.

The Thundering Herd rose to prominence thanks to the brilliance of quarterback Rakeem Cato, a dynamic passer who has rewritten the record books many times over. Making the jump from pedestrian to prolific as a program depends on the ability of an offensive line to block and receivers to catch, but the special leader and trigger man is undeniably the centerpiece of most college football revivals in this, the modern iteration of the sport. College football is a quarterback’s game, whereas the version of the sport played circa 1980 was entirely a running back’s realm. Cato slipped in late-season contests against Western Kentucky and (in the Conference USA Championship Game versus) Louisiana Tech. Given a few weeks to regroup, Cato will get to showcase his skills against a highly-regarded opponent. An elite quarterback against a decorated program is much, much more than what college football fans could ever ask for from a rush-hour game on Tuesday, Dec. 23.

Savor Northern Illinois-Marshall, everyone. For a first-time bowl played in a small stadium in an inconvenient time slot, this rates as a spectacular matchup, precisely because it will settle a number of arguments, chiefly the foremost competitor to Boise State among the Gang Of Five’s various conference champions.

In future seasons, the Gang Of Five would do well to create a one-game playoff. For now, though, we get a variation on such a playoff in a bowl game. Consider this matchup an early Christmas present for the dedicated college football fan.