The story of the last two New Mexico Bowls is the story of why bowl games are a (wait for it) Land of Enchantment as far as college football fans and pundits are concerned.

Bowl games don’t always hit the sweet spot (see the 2011 Fight Hunger Bowl between 6-6 Illinois and 6-7 UCLA), but they always hold out the promise of something wildly entertaining, for one crucial reason: If the bowl game is not spiced with national title stakes or reputation-changing weight for one of the programs or coaches, it is — in the end — a matter of less-than-earth-shaking consequence.

Yes, every bowl is a championship game — the winner gets a trophy and the right to say that it capped the season on a high note, either affirming what it did during the season or compensating for what it might have failed to do from September through November. It’s not as though bowls are meaningless — they’re not, and as we said yesterday, it’s much better to emphasize that Team B was more motivated in a game, not that Team A was motivated less. Bowl games are occasions in which teams find meaning in the moment.

Yet, let’s not deny the larger point: Not all bowls are created equal. The playoff semifinals and the Cotton Bowl own levels of urgency that this Saturday’s five bowls won’t match. Rutgers-North Carolina in the Quick Lane Bowl on December 27 won’t be as big a deal as Nebraska-USC on December 27. Notre Dame-LSU is more of an event than Maryland-Stanford. This is not an overly complicated point, nor should it be a particularly controversial one.

The reality flowing from these distinctions is clear: If the game doesn’t mean everything to a program or coaching staff; if a win-or-lose result won’t profoundly reshape the offseason — something we examined yesterday as well — coaches do not have to guard this game with their lives. They can become liberated creatures. They can have some fun and relax.

The last two New Mexico Bowls tell the tale. It’s a story Jesse Pinkman might appreciate, given the kinds of parties he threw on Breaking Bad.

(Side note: Anyone who wants to informally call this game in Albuquerque the Breaking Bad Bowl is more than welcome to do so.) 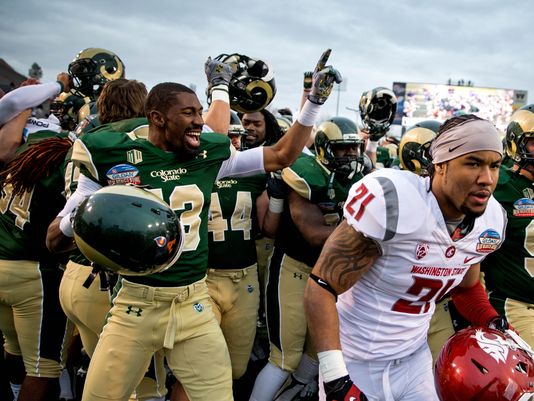 Last year’s New Mexico Bowl between Colorado State and Washington State was insanely entertaining… much like the 2012 game between Arizona and Nevada. The New Mexico Bowl has become what the Holiday Bowl was in the 1980s.

If points were a drug, you got high on this particular bowl the past two seasons. One team scored 48 points in each of the past two New Mexico Bowls. Only one of them won.

In 2012, Arizona topped Nevada, 49-48, after trailing 21-0 and then 45-28 entering the fourth quarter. In 2013, Colorado State — down 45-30 with three minutes left in regulation — somehow managed to score 18 points in 2:52 and stun Washington State, 48-45. Yes, Washington State coach Mike Leach should have exercised a LITTLE bit of caution and prudence — had he simply taken three knees with two minutes left when his team had possession of the ball, the Cougars would have won, 45-37. However, when removing that event from the equation, these two games were representative examples of how a non-reputation-changing bowl game should be treated: as something FUN.

Rich Rodriguez, the now-retired Chris Ault, Jim McElwain, and Mr. Leach chased opportunities instead of exhibiting the dreary NFL mentality we see far too often from college coaches. In the NFL, yes, the quality and talent of defenses are too high to take constant risks on fourth and three or four from any spot on the field. However, college football is not the NFL. You can exploit more receiver-corner matchups or other situations in which the talent of your guy is appreciably greater than the talent of their guy. Yet, so many college coaches — we see this during the regular season — are absolutely paralyzed at the thought of going for it on fourth down and anything more than a full yard at any time, save for endgame situations when there’s really no choice to be made.

In bowl games such as the New Mexico Bowl, talented coaches — such as Rich Rod, Ault, McElwain, and Leach — are wise enough to say, “Let’s cook!”

Fans and pundits alike get to see the sport closer to how it’s meant to be played — not as a casual exhibition, no, but as a sport in which you DO get four chances to make a first down and should exercise that choice a little more often if you have a really good offense.

The point is a deceptively simple one: If you, as a coach, really believe in your offense and trust your players to apply what they learn in (extra bowl) practices, you should — simply as a point of principle and teaching-based integrity — want that offense to execute under the pressure fourth down invites.

If coaches want to think that their teaching has a positive effect, fourth-down boldness should be trusted throughout the season. Acknowledging that the NFL mentality is still too pervasive in the college game, though, let’s at least arrive at some middle ground and say that bowl games should offer sanctuary for this more aggressive form of football. The sport’s coaches might not be ready to trust their offenses in regular season games or playoff semifinals; the New Mexico Bowl and other games you see this Saturday should be laboratories of fun and practice, football chemistry sets in which coaches see if bowl practices lead to better habits in pressure situations, setting the table for spring ball and the following season.

In the end, most bowl games have a purpose. Punting on fourth and two from midfield does nothing to advance that purpose if the game is not the kind of game which will dramatically affect a season or the reputations of the competitors involved.