Please allow me to welcome the entire college football world to the city of Philadelphia this week. Some of us have been waiting a long time for a moment like this.

Philadelphia does a tremendous job rolling out the red carpet for the Army-Navy Game every time the service academies come to town at the end of the season, but this week Philadelphia steps into the college football spotlight like it has never experienced before. The Temple Owls — the No. 21 and 7-0 Temple Owls — are preparing for the biggest game in program history with No. 9 Notre Dame.

Here in Philadelphia we pride ourselves in our sports history, even if there is not a tremendous supply of hardware to show for it.

The Phillies won a World Series in 2008 to end a 25-year championship drought, but if you take the pulse of Philadelphia sports right now, it already feels as though it may be another 25 years before another parade down Broad Street is witnessed. The Phillies were the worst team in baseball this year. The Sixers are embracing a tanking strategy for long-term success. The Flyers have not won the Stanley Cup since the Broad Street Bullies won back-to-back titles in the mid-1970s. The Eagles are the only team in their division without a single Super Bowl victory, while the rest of the teams in the division have multiple Lombardi Trophies. (Save us, Chip Kelly!).

Despite the losses and agonies year after year, Philly sports fans always come back for more. We must be gluttons for punishment. We do so because we identify with our sports teams and know that when the moment of glory does eventually come, the reward will be all that much sweeter. I imagine Temple fans are feeling that way this week, and for good reason.

I have absolutely no ties to Temple. My interest in Temple football exists solely because I root for Philadelphia. I may have a well-established rooting interest in Penn State, but I have long been hoping for Temple to find sustained success as a football program, because I love college football and Philadelphia. I am sure others are experiencing a much more rewarding high this week, knowing their Owls are in this position.

Philadelphia is a sports town. It is a pro sports town, and nothing will ever change that. Yes, we do get a bad reputation and have to hear about exaggerated stories that nobody retelling them actually witnessed. However, Philadelphia has a positive sports history as well, and that includes a slice of college football history. 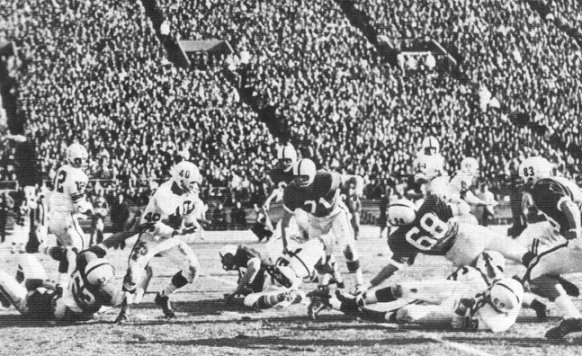 The Penn Quakers of the Ivy League have seven national titles and 633 all-time wins, and still play games in historic Franklin Field, which once served as Temple’s alternate home for football games when Veterans Stadium was not an option due to scheduling conflicts with the Phillies or Eagles. Having seen a couple of games there (Penn-Villanova, Temple-Penn State), it is still a treasure to watch a game in the same place that gave us Chuck Bednarik, John Outland, and John Heisman.

In addition to being the birthplace of our nation, Philadelphia also served as the host city for the Liberty Bowl for its first five years before ultimately moving south to Memphis. The Liberty Bowl gave us our first matchup between Penn State and Alabama in 1959. Penn State and Oregon played in the game the following year. In 1962, Oregon State’s Terry Baker brought the Heisman Trophy to the Liberty Bowl.

Philadelphia’s college football history rarely features Temple, but perhaps that is about to change. The first college football game to be played between ranked opponents in Philadelphia is quite the opportunity for Temple. Win or lose against the Irish, Temple continues to head in a positive direction, and that bodes well for college football fans living in and around the Delaware Valley.

So welcome, college football world, to Philadelphia. I truly hope you make yourself at home.