The college basketball coaching carousel hasn’t stopped spinning, but its main whirl has run its course.

The wheel didn’t, but the central flurry of activity did.

The fact that all coaching vacancies have not been filled means the final tallies of various statistics cannot yet be tablulated. However, enough activity has occurred that we can render some assessments of the 2016 edition of the carousel. We’ll slowly pick apart this topic — we have time in the offseason — and tell some stories.

Today’s first story: A lot of the coaches in the 2016 carousel are hitting the reset button in their careers — some in the process of making upward career moves, but hardly all.

Menzies — hired by UNLV and shown in the cover photo for this story — is a head coach who had worked at the same school since the previous decade (2009 or earlier). He came to New Mexico State in 2007.

How many other coaches in the Carousel Class of 2016 share that characteristic, having been the head coach at another school since 2009 or earlier?

The answer: nine, creating a total of 10.

Jim Engles is now at Columbia after a lengthy stay at NJIT. Zach Spiker started at Army in the first decade of the 21st century; he’s now the new coach at Drexel. Josh Pastner started last decade (yes, it was that long!) at Memphis, and Georgia Tech reached out to pull him to Atlanta.

Kevin Stallings started at Vanderbilt before the turn of the century. He wanted to freshen up his career at Pitt… after Jamie Dixon wanted the same in his move to TCU. 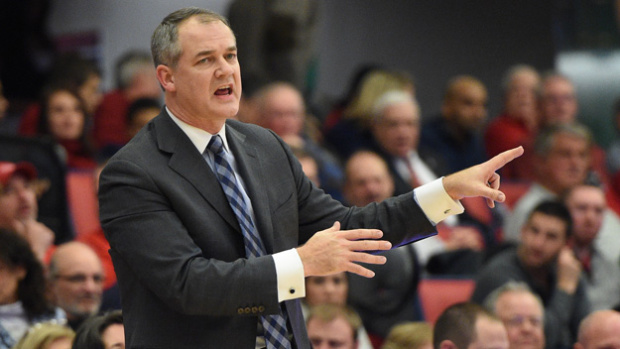 Steve Pikiell (above) wanted a new challenge at Rutgers after finally guiding Stony Brook to its first NCAA tournament appearance. Travis Ford couldn’t cut it at Oklahoma State, so he moved down the ladder to Saint Louis. Johnny Dawkins also accepted a downward move, to UCF from Stanford.

Last but not least, Scott Nagy had coached at South Dakota State since 1995, before he was 30 years old. After 21 seasons with SDSU, he wanted to try something new at age 49: Wright State.

That might be one of the most curious coaching jumps ever seen.

At any rate, it’s part of a 10-man exodus — not just from any job, but from an established job.

Only Dawkins and Ford had been cut loose. The others — even Pastner at Memphis — were going to stay on the job for at least one more season. Dixon did something rare in coaching circles, willingly moving downward in order to embrace a better quality of experience. TCU is his alma mater, and he’ll face a lot less pressure to win than he did in Pittsburgh.

Just for the sake of comparison, consider how many newly-hired head coaches in the Carousel Class of 2016 had previously coached at other schools (as head coaches, not assistants), but only within this decade. Ray Harper (Western Kentucky to Jacksonville State) is one. Tubby Smith is another. Brad Underwood of Stephen F. Austin makes three. Kyle Smith of San Francisco (from Columbia) increases the total to four.

Relatively entrenched coaches outnumber shorter-term coaches, 10-7, if the line of demarcation is the start of this decade (2010).

Expectations and frameworks can (and do) vary, but when most people think of new head coaches in college basketball, they probably lean toward the idea that said coaches are eager, young high-climbing go-getters who don’t stick around very long at a lower-tier job and try to make their way to the top.

This year’s Carousel Class cuts against that notion.

We’ll see how these 10 coaches — having spent seven or more seasons in one place, and thrust into new positions — reset their careers, starting next season.