When we think of game management in team sports, baseball is the first one that comes to mind. After all, the leader of a baseball team isn’t called the “manager” for nothing.

Day after day, a manager must make the same kinds of decisions:

Trust the hot hitter or use a pinch-hitter with good historical splits against Pitcher X?

Bunt or hit away?

Use the closer in the eighth against the heart of the order or save him for the ninth?

No endgame is scrutinized as much as baseball.

In second place is football: When to call timeout, when to spike the ball to stop the clock, when to kick that field goal down 10 in the final 90 seconds — these and other matters become hugely important in increasing a team’s options in the closing moments of games. The reality that football is our nation’s most popular sport gives football endgame management a centrality which rivals baseball… but the grand old game still beats pigskin in this regard.

Hockey just doesn’t lend itself to endgame management in the same layered way. Sure, coaches need to know when to pull a goalie, and they want the right combinations of players on the ice, but the constant flow of hockey and the difficulty of getting one goal create a dynamic in which the final two minutes are different from the first 58 in only one profound way (the empty net and the extra attacker it brings forth).

Where, exactly, is basketball’s place in a larger consideration of endgame management?

It’s not as though endgame management is ignored in basketball. Foul-or-defend conversations rage each year. “Do you need a three in this situation?” is also an annual question you’ll hear late in many game broadcasts. Plenty of basketball people — especially in college, given its continued but limited use of the one-and-one — talk about situational fouling with some regularity. Due to college basketball’s longer shot clock (35 seconds) and its lack of the “automatic advance” rule the NBA has following endgame timeouts, other scenarios capture the attention of college basketball fans and analysts. Endgame management situations are not dismissed as a measure of daily discourse on the topic.

Yet, for all the discussions that deal with endgame management in college basketball, it certainly seems that one group of people has not yet mastered its finer points: the coaches.

We wrote at The Student Section after the bowl games that college football coaches need to hire game-management assistants.  The concept might seem sensible in college hoops, but the intimacy and immediacy of the sport make it hard for anyone other than the head coach to be the person to make all the relevant decisions at the end of a game. The most sensible thing a head coach can do is to make sure that one of his assistants has the responsibility of handling endgame situations and maps out a plan at the under-four-minute media timeout in the second half, or during a team timeout called near the 1:30 mark of regulation. Yet, those ideas reinforce the basic point: The head coach is the one who HAS to know what he’s doing. Whether he takes charge himself or delegates responsibilities to his assistants, he has to know the right moves to make. 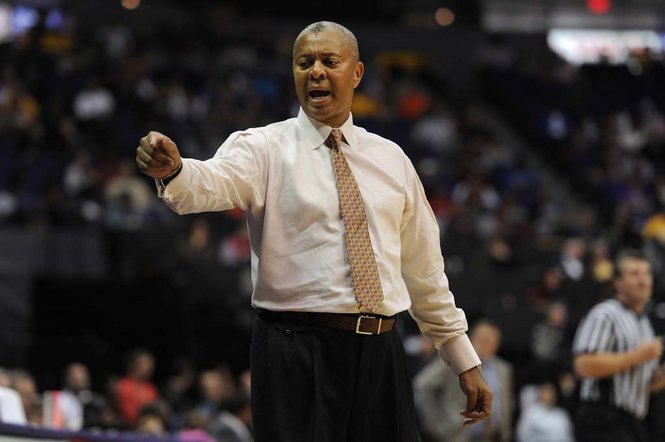 LSU’s Johnny Jones didn’t manage the final minute of a game as poorly as Mark Fox did on Tuesday night… but he still came up short in terms of meeting basic standards of competence.

Let’s start with the D-minus coaching performance on Tuesday night before going to the “F” in Athens, Georgia.

In College Station, Texas, the LSU Tigers — down 64-62 to Texas A&M with just over 30 seconds left with the shot clock off — waited roughly 10 seconds to give a foul and send the Aggies to the free-throw line. Wasting 10 seconds in the final half-minute of a game in which you trail by two points? That’s a significant coaching error by LSU’s Johnny Jones, whose skill in handling the final minutes of games has been a recurring problem for LSU this season.

Yes, players get distracted and lose focus for a few seconds, so if a team loses five or six seconds before realizing it has to foul, that happens. It’s not ideal, but it happens in the clamor and clutter of endgame chaos. A 10-second runoff, though? Someone exists on the bench to yell at players to foul. That’s the head coach. If 10 seconds drip from the clock, chances are the head coach is either not paying attention or did a poor job of telling his players to foul if they didn’t get a steal in the backcourt.

What’s glaring about Jones’s mismanagement of LSU’s crucial bubble-game loss to Texas A&M, then, is that on Tuesday night in the SEC, it was hardly:

B) the worst example of endgame management to be found.

The “F” grade for game management on Tuesday night belonged to Fox — Mark Fox of Georgia. The extent to which he butchered the final minute of his team’s damaging loss to South Carolina should be a wake-up call for coaches who — like Johnny Jones — are not airtight in getting their players to implement what should be obvious and necessary strategies.

Let’s get two hypotheticals out of the way first: Let’s say South Carolina was in the double-bonus and not the one-and-one. Maybe a coach could rationalize that with a double-bonus, the likelihood of South Carolina getting at least one point would make it acceptable to play defense, get a stop, and earn possession with around 25 seconds left in the attempt to come back. Losing nearly 35 seconds down four points (two scores) would make that line of reasoning fall short on the merits, but at least a coach would have a valid counterpoint.

The fact that South Carolina faced (potentially) three one-and-ones in the final minute of regulation made it incumbent upon Fox to make sure that the Gamecocks had to sweat out all three front ends of one-and-ones under a maximum of pressure. If Team A leads Team B by two scores in the final minute and faces the possibility of having to endure three one-and-ones, it is not a debate at all. Team B must force Team A to make at least two front ends, if not all three, to survive.

What did Mark Fox do?

Georgia waited 11 seconds before fouling South Carolina with 47 seconds left. That was an appalling waste of time akin to what happened with Johnny Jones and LSU against Texas A&M. If Fox’s mismanagement had ended then and there, he would have been no worse than Jones.

Then, however, this situation devolved into complete and utter absurdity.

The Gamecocks inbounded the ball with 47 seconds left and were not immediately fouled. A good 10 more seconds melted off the clock before (unwisely, and rather shockingly) the Gamecocks attempted a long jumper. Fortunately for South Carolina, it managed to track down the rebound with around 36 seconds left.

Surely, Georgia would have instantly fouled then, right?

The Bulldogs did not foul again until 25 seconds were left on the clock. That’s right: Georgia — which wasted 11 seconds to give its sixth foul with 47 seconds remaining and then allowed 11 seconds to run off the clock before South Carolina attempted a foolish jumper — watched 11 MORE seconds tick off the scoreboard before FINALLY sending the Gamecocks to the line for a front end of a one-and-one.

All told, it took 33 seconds (!!!!!) for Fox and Georgia to send South Carolina to the line for a one-and-one in the final minute of a game in which the Bulldogs trailed by TWO possessions.

South Carolina made the front end and missed the second. After Georgia raced downcourt but had trouble finding a quick open shot, the Bulldogs were fouled. They made one free throw, missed the second, and then missed a shot attempt with roughly seven seconds left. South Carolina gained the rebound, leading by a 62-58 score. The game was essentially over. The Gamecocks attempted only one front end in a pressure situation. A second front end with five seconds left with a four-point lead meant nothing. The outcome had already been decided.

This might seem to some like little more than a gratuitous, even gleeful, attempt to humiliate a head coach, a person with a family and job pressures just like the rest of us. Be assured that it’s not. There’s nothing pleasant to be found in seeing a game mismanaged.

The much, much bigger point here, though, is that Fox is very well compensated to do what he does. He’s entrusted with one of 351 Division I men’s basketball head coaching jobs. Reduced to the Power 5 conference level, he’s the owner of one of 65 jobs plenty of other individuals would love to have. College basketball is a billion-dollar business. It should be a point of concern — and considerable interest throughout the industry — if coaches cannot make basic (correct) decisions about endgame strategy.

No, this doesn’t carry the same weight of Major League Baseball in October, and it doesn’t possess the same cultural significance of college football (that’s where Georgia fans get much more upset about game management when it goes wrong). However, when we see coaches fail to meet basic standards of professionalism as practitioners of a craft, athletic directors should step in to make sure they know what their foremost employees are doing on the bench once the clock ticks down to 1:00 in the second half of a February game with bubble implications.

It’s time for college basketball coaches to brush up on endgame management. If they aren’t willing to do so on their own, their athletic directors need to make sure they do.