It’s almost Presidents’ Day, which means that college basketball is getting down to the nitty gritty.

The Super Bowl is done. The NBA All-Star Game will be done when America’s next federal holiday arrives. You might be sane right now, but you can begin to get a whiff of madness, wafting into the room.

Yes, plenty of casual sports fans are waiting for what — in their eyes — represents the only month in which college basketball matters. However, those who know and love college hoops cherish all the action which occurs before March.

One of the more particularly special and satisfying feelings any college basketball fan can experience — and which is always enjoyable to chronicle from a blogger’s chair — is the moment in the middle of February when a program which was previously down and out, or not expected to do a whole lot this season (or both), accumulates enough poker chips on its resume that it becomes a near-lock to make the NCAA tournament. “Lockdom” is a status attained when losing the rest of one’s games would still not result in (possible) exclusion from the Dance hall. There’s just enough hoops left that we can’t apply the lock and key to these programs in their pursuit of a central goal. However, we’ve arrived at a moment when we can say, “Barring a total collapse, Team X will make the tournament — HOLY MOLY!”

It’s one of the best realizations in college sports.

Texas A&M is a program which fit into this category weeks ago. In many ways, the Aggies (despite their current struggles) had already created that eureka moment — “Wow, this team’s almost surely going to go Dancing!”

Other programs are trying to pursue that moment, but probably won’t be able to establish enough breathing room before March to create an easy jog to the NCAA tournament finish line. Such examples are Washington — which would dramatically change the mood around its program by making the field this year — and Florida State, which is so overshadowed by its football and baseball programs that it needs to be able to make the field when it has a good chance of doing so.

For now, however, let’s consider the two programs which have arrived at the “Look at that! These schools are almost surely going to make it!” station.

They’re the schools which are part of a longstanding territorial argument in college sports.

That’s the contention of South Carolina Gamecock fans and alumni, who are not too impressed with that other school in Los Angeles, the one which is a magnet for Hollywood stars and big-city intrigues.

Fans of the USC Trojans — given the stature of their football program over the course of history, and the entrenched nature of their brand name — are the party to this tug-of-war which doesn’t feel the need to have to defend its turf. The feeling that the Trojans are “the real USC” is obvious to the point that it doesn’t need to be discussed. The fight over “the real USC” is driven mostly by the energy which comes from Columbia and the Palmetto State.

If you’ve been a student of the college sports internet for any appreciable length of time, chances are you’ve seen the shorthand “USCe” in some instances. Whether a statement of identity or a neutral and well-meaning attempt to provide equality to the Gamecocks, that abbreviation for “USC East” perpetuates the idea that there are two USCs.

You can take that idea or leave it — the fate of a soul or the welfare of a community is not at stake. What those two communities — Columbia and Los Angeles — can very much agree on is that the coaches they’ve hired have finally made good on their efforts to deliver a winner. Hope — not pie-in-the-sky, but informed by reality — is a very rare feeling for men’s hoops fans at these two schools. Now, that feeling abounds.

It’s a special time to be a USC men’s basketball fan — West or East. 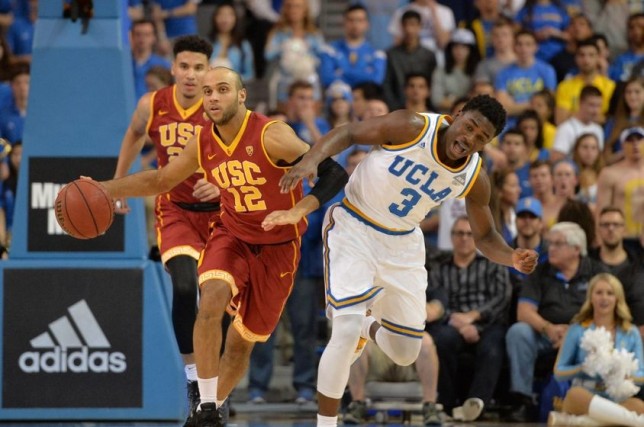 Storming past UCLA on two occasions this season has enabled USC to acquire a commanding position not only in the city of Los Angeles, but in a race for an NCAA tournament slot and a return to prominence.

The USC Trojans play Arizona State Friday evening. Should the Trojans win that game, they’d ensure a split of their Arizona road trip. As long as they split their roadies and don’t fall apart at home over the next three weeks, they’re going to go to the NCAAs for the first time since 2011. That year, for the college basketball historians in the crowd, was marked by a very questionable NCAA tournament inclusion. Virginia Tech and Colorado were the two more deserving entrants in that season’s Dance, but they were relegated to the NIT by the Selection Committee. USC (in step with the other surprise bubble winner of that season, UAB) promptly produced a complete clunker in the First Four in Dayton, losing to the VCU team which then embarked on a Cinderella run to the Final Four as an 11 seed.

The last really good taste of USC basketball came in 2001, when the Trojans upended second-seeded Kentucky in the Sweet 16 and deprived America of the reunion it wanted — Duke versus Kentucky in a regional final in Philadelphia, a reprise of the 1992 classic regarded by many as the best college game ever played.

Yes, we’re ignoring the 2007 trip to the Sweet 16 and the 2009 trip to the round of 32, because Tim Floyd — USC’s coach at the time — represents one of the most soulless and depressing stories in 21st-century coaching. His career could have (should have) been so much greater than it was, but his ill-timed romance with the NBA and his constant lack of self-control in running programs have pushed him to the margins of college hoops, where he’s failing to guide UTEP to the NCAAs. Floyd’s violations at USC represent a dark period for the program. On a number of levels, the 2001 team was the last team to capture the imagination of Trojan fans without creating a subsequent dark cloud. 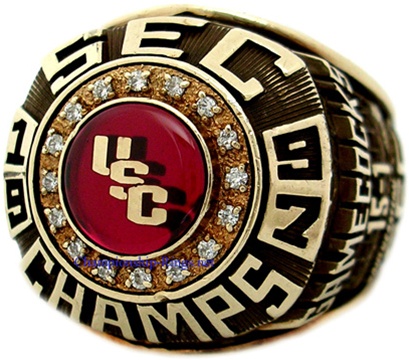 An SEC championship is something to be proud of, and that 1997 title is something Frank Martin is shooting for in the coming weeks. Merely having a chance to attain a piece of hardware is something South Carolina fans couldn’t have reasonably expected a year ago, when the program remained stuck in the lower half of the SEC.

For South Carolina, the last period of genuine, bursting optimism was the late 1990s, when Eddie Fogler — the Dean Smith disciple who rapidly ascended the coaching ladder and took Vanderbilt to the Sweet 16 in 1993 — guided a dynamite backcourt to a pair of top-3 seeds in consecutive NCAA tournaments. However, South Carolina was torn apart by Fang Mitchell and Coppin State in 1997. The Gamecocks were bitten by the Spiders of Richmond and a man named John Beilein in 1998.

This 2016 season — in which South Carolina and the Men of Troy have both stormed from the bottom tier of their conferences to establish themselves as near-certain tournament teams, roughly four weeks before Selection Sunday — represents not just a tremendous accomplishment, but a thunderbolt of abrupt change. It’s worth underscoring that detail.

For many programs, the path to renewed respectability is a gradual one:

Fail to do anything in one season. Get to the CBI or CIT the next season. Then crack the NIT. Then make the big show.

Not these teams. They have engineered 180-degree reversals this season.

The two USCs combined to win only NINE regular season conference games a year ago (6 for South Carolina, 3 for the Men of Troy). South Carolina won two games in the SEC Tournament, but the weakness of that conference detracted from the Gamecocks’ body of work instead of adding to it. When South Carolina beat Kentucky in early March of 2014 — the game which caused Kentucky fans to panic about their NCAA tournament chances that season, only for John Calipari to get the last laugh by leading Big Blue to the national title game — the Gamecocks seemed ready to take the next step, but the 2014-2015 season didn’t witness a substantial progression. 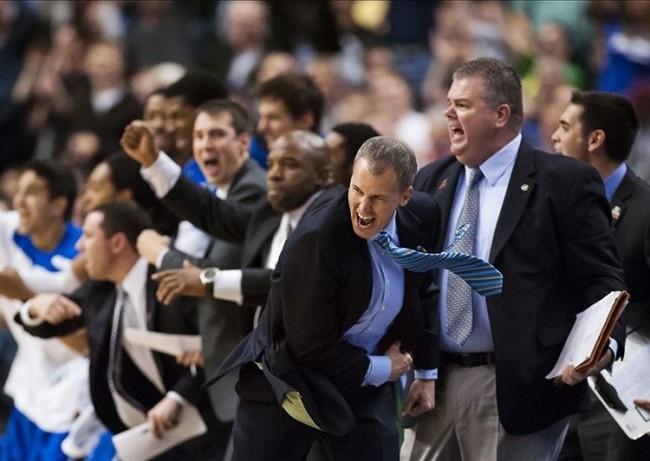 This is how much fun Andy Enfield had at Florida Gulf Coast. He was miserable in his first two seasons at USC, but he’s brought the fun to theTrojans, snapping them out of their funk.

Andy Enfield was having so much fun in Dunk City, the Florida Gulf Coast playground where his teams — exhibiting what one could call “unstructured structure,” playing racehorse basketball with a sense of purpose and intent — enjoyed unprecedented success. FGCU became the first 15 seed to crash the Sweet 16, and while the Eagles didn’t beat Florida in the regional semifinals, they were not blown off the court. Enfield and his team carved out a special place in college basketball history. Going to Los Angeles with the “Dunk City” label slapped on his back put Enfield under pressure not only to win, but to deliver the attractive product Angelinos expect from their sports teams.

The first two seasons of USC basketball under Enfield could not have been more unlike the coach’s personality. Two total slogs — studies in labored root-canal basketball with zero aesthetic appeal — should not have come as a surprise. The program was a mess when Enfield inherited it. Nevertheless, with UCLA making two Sweet 16s (albeit one it frankly didn’t deserve to make for a whole host of reasons), the past two years did nothing to advance the idea that Enfield was going to make athletic director Pat Haden look good.

As is the case with Martin in South Carolina, however, USC has abruptly created an “Enfield of Dreams” on the hardwood. The high-scoring, pace-pushing, rip-roaring, attack-mode identity of Florida Gulf Coast has burst into color this season. The Trojans have outraced Washington. They outlasted Arizona in a four-overtime game which marked the true pivot point in the team’s season. Most important of all for the locals, they not only defeated, but hammered, UCLA in both meetings.

The most cautious and emotionally scarred USC basketball fan would not have dreamed up a scenario as golden as the one Enfield and his athletes have authored to this point in time. This team — like South Carolina — might not be a 100-percent lock, but with so many teams drifting near the bubble, and with conferences such as the Mountain West and Missouri Valley likely to deliver only one team to the field of 68, it’s virtually impossible to imagine the two USCs missing out on the fun one month from now.

Yeah, they have to win a couple more games to attain true “lockdom lockdown” status, but they’re already in that “barring the impossible, they’re in” safety zone… with Presidents’ Day still a few days away.

Which is the real USC?

However, the much more important point to make is that both South Carolina and the Men of Troy are once again very real — really good — in the world of men’s college basketball.

If you thought you were going to think, read or type that sentence 11 months ago, you’re either clairvoyant or a liar.

I’d bet on the latter.