Let’s process what happened to the eliminated teams on Friday night in Chicago and Philadelphia: 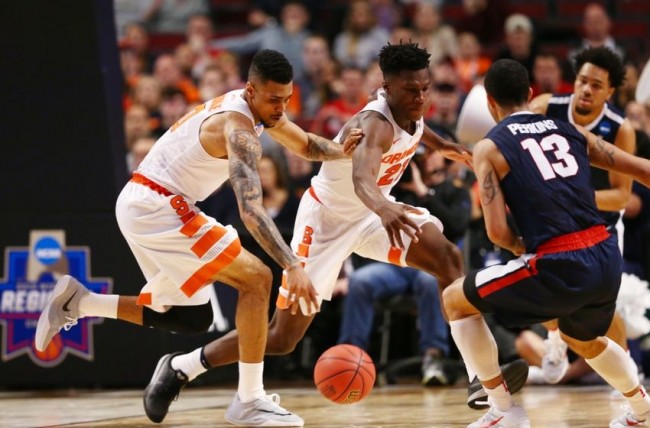 That’s Josh Perkins of Gonzaga in the photo above. He, Eric McClellan, and Kyle Dranginis had elevated their games in the month of March, powering the Zags to the WCC Tournament championship and two convincing wins on the first weekend of the Big Dance. Kyle Wiltjer and Domantas Sabonis carried most of the workload this month — as they’ve done all season — but the Zags became a complete team when their backcourt finally clicked.

Perkins, McClellan and Dranginis combined to hit just 6 of 19 field goals. Wiltjer (9) and Sabonis (8) made more field goals on their own. Instructively, Perkins-McClellan-Dranginis didn’t attempt a single free throw all night. Wiltjer and Sabonis were both extraordinarily difficult for Syracuse to hem in, but the Orange very successfully squeezed Gonzaga’s backcourt, including the final three minutes, when a full-court press created multiple Zag turnovers.

Beyond specific components of the Zags’ roster, here’s a whopping two-part stat which sums up Syracuse’s persistence and Gonzaga’s late-half nerves: In the final six minutes of each half, Gonzaga scored a total of seven points (4 in the first, 3 in the second). That’s 7 points in 12 minutes.

This wasn’t UCLA in 2006, but it’s a Sweet 16 loss which is still plenty painful for Mark Few. 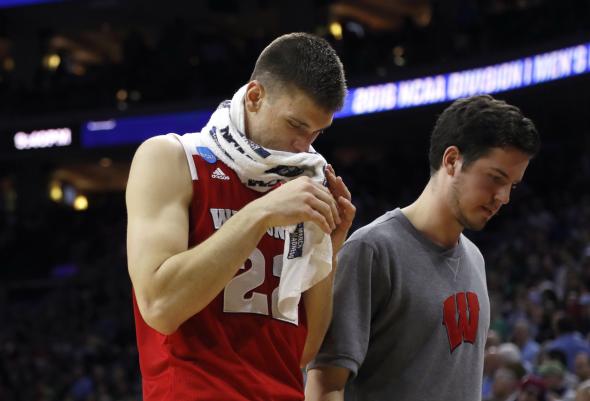 Nigel Hayes was fouled by Demetrius Jackson on the steal-scoop-and-score which gave Notre Dame a late lead.

That point is covered here at The Comeback:

That point having been made, Bronson Koenig still had a layup to give Wisconsin the lead again… and he simply missed it.

Wisconsin overachieved so richly and substantially this season. The program is in very good hands under Greg Gard. This was just one of those wild sequences that emerged — and did its damage — in the blink of an eye. 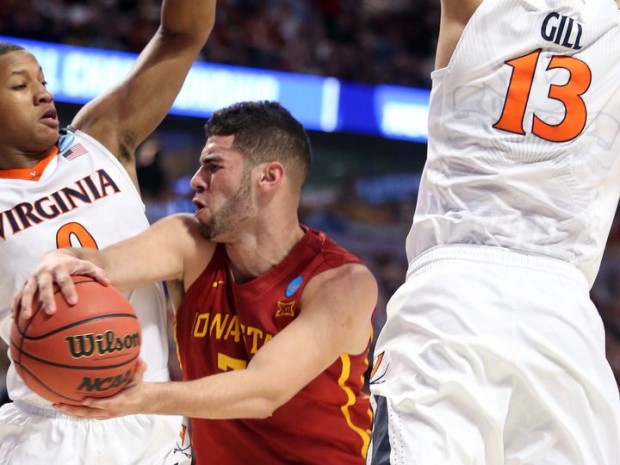 That was Georges Niang’s stat line against Virginia on Friday in Chicago. Niang dazzled from start to finish. He made it rain from three-point land. He unfurled some nifty reverse layup moves, using the rim as an extra screener for defenders. His pell-mell drives create the appearance of a lack of control, but his bursts of speed catch defenders off guard and draw fouls. Niang singlehandedly kept Iowa State in the same zip code all night, though Virginia was always 30 yards ahead of the Cyclones.

Iowa State had to try to force Virginia into a jump-shooting contest, but the Cavaliers — using high-low entry pass angles from the top of the key (from one elbow area to the other, basically) — wouldn’t take the bait often enough for that to matter.

Now, Steve Prohm contemplates life without Niang. Iowa State enters a very uncertain era, hoping its second-year coach will be as resourceful as its first-year coach was. This team, without Naz Long, didn’t have its full complement of offensive resources. ISU did well to get this far.

Getting deeper into the Dance in future seasons will likely be a very daunting challenge.

Nobody took the #iubb loss harder than Thomas Bryant. pic.twitter.com/aMmTdmUysG

The Hoosiers produced a fine season, one they should generally be happy with, given that the skies were very dark in early December.

A rally against Notre Dame for a stirring victory turned this season around. Incidentally enough, Indiana was hoping to reunite with the Irish after Mike Brey’s team upended IU’s Big Ten neighbor from Wisconsin in the first East Regional semifinal, part of an unofficial extension of the Big Ten-ACC Challenge. That didn’t happen, and it didn’t happen because North Carolina simply put the hammer down.

North Carolina doesn’t have terrific pure shooters, but Marcus Paige — struggling with his shooting stroke all season — simply caught fire on Friday. He made four quick threes out of the gate. UNC hit 7 of 8 threes in the first half, and continued to shoot the cover off the ball.

North Carolina has some weaknesses, but those weaknesses became strengths on Friday. Indiana had no chance in the face of UNC’s best performance.

The lesson for Indiana is in many ways the same lesson Maryland learned against Kansas: Avoid bad losses (Wake Forest, UNLV, Penn State) to ensure a top-3 seed. Yes, Indiana deserved a 3 instead of a 5, but the bad losses obviously gave the Selection Committee reason enough to give the Hoosiers a raw deal. This is why — as much as the casual sports fan focuses on March and only March in college basketball — the previous four months matter. If Indiana hadn’t lost those three games to inferior teams, it would have been on the 3 line at worst.

It might still be in the tournament right now, preparing for an Elite Eight game.

Brackets matter. So do November, and December, and January, and February.