After Thursday’s utter absence of drama, Friday’s heavyweights had to be on guard in the Sweet 16.

The Cavaliers and Tar Heels moved within one step of a 1981 Final Four national semifinal reunion. Meanwhile, Notre Dame and Syracuse both scored surprising victories against the run of play to ensure an all-ACC national semifinal and a conference representative in the national title game on Monday, April 4. Those win shares will continue to fatten the ACC’s coffers. John Swofford has hit the jackpot this season, and moreover, the ACC is doing this after going 2-for-2 in the College Football Playoff.

The Big 12 and Pac-12 both missed out once on the College Football Playoff.

Think Oklahoma-Oregon’s big? It’s even bigger than you might have first realized.

At any rate, while John Swofford laughs all the way to the bank, here are some notes on Friday’s four winners: 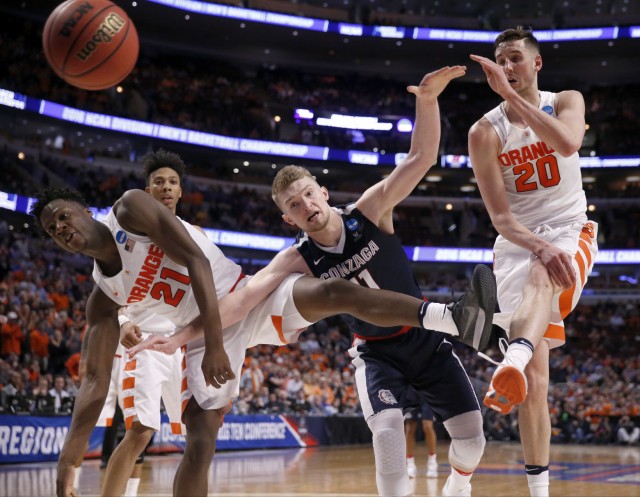 Gonzaga’s Domantas Sabonis (11) is fouled by Syracuse’s Tyler Roberson (21) as Tyler Lydon (20) blocks a shot during the second half of a college basketball game in the regional semifinals of the NCAA Tournament, Friday, March 25, 2016, in Chicago. (AP Photo/Charles Rex Arbogast)

The above picture shows a Gonzaga player (Domantas Sabonis) getting fouled, but it also shows how hard Syracuse worked and how desperately the Orange played. Jim Boeheim’s team could have been satisfied with a first weekend in which everything went exactly right. Syracuse could not have scripted a better pair of two games in St. Louis. They unfolded exactly as planned — what was written on the chalkboard jumped into the pages of reality on the court.

Friday, Syracuse had to face genuine game pressure and two players far better than any the Orange had seen the week before. Sabonis and Kyle Wiltjer are going to make solid NBA players — maybe not elite ones, but they should be able to carve out steady careers in the league. Syracuse — even with its length in the 2-3 zone — could not stop either man. The two combined to shoot 17 of 29 from the field, even though they received constant attention from Syracuse defenders. Sabonis unfurled an awesomely impressive 19-17-5 line, with the 5 referring to blocked shots and not assists. All told, Sabonis and Wiltjer combined to go 42-22-7-5 (points, boards, blocked shots, and assists). They were magnificent.

When you then realize that Syracuse hit only 36 percent of its field goals and made only 14 free throws all night, how exactly did the Orange — trailing 18-8 six minutes into the game and 57-48 with just over six minutes remaining in regulation — dig out of two separate ditches and keep Gonzaga locked outside the Final Four candy store?

Syracuse forced 17 turnovers while committing only nine. Gonzaga’s backcourt committed more turnovers (10) than the number of field goals and free throws it made all evening (7, among four GU guards).

Here’s the bigger collection of stats as far as possessions are concerned, because this collection focuses the discussion on the final three minutes, when Gonzaga’s ball-handlers unraveled:

Syracuse, meanwhile, piled up 13 possessions in those same three minutes, a plus-6 differential. The Orange had been blasted on the boards when Gonzaga surged ahead for its 57-48 lead entering the home stretch, but in the closing minutes, SU won those rugby scrums under the tin, including the one which led to Michael Gbinije’s go-ahead layup with 22 seconds to go.

Syracuse got punched in the mouth on two separate occasions, but it showed that a zone defense’s velvet glove can still contain an iron fist underneath.

Gonzaga couldn’t squeeze the orange in the final minutes, so the Orange squeezed the Zags right out of Bracketville. 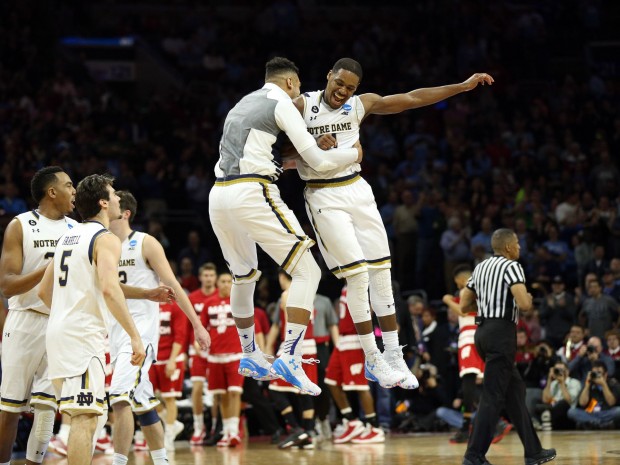 The Irish’s win was reviewed here at The Comeback.

Some other observations that didn’t make it into that piece:

First, before the wild endgame sequence, consider a moment of composure from Notre Dame’s Zach Auguste. A subpar free throw shooter (in the low 60s), Auguste’s late-game 1-and-1 was interrupted by a replay review. Auguste was iced not by Wisconsin coach Greg Gard, but by game administration procedures. He hit the front end.

Then, a Notre Dame player had to be taped up on the bench, causing a second delay before the back end of the 1-and-1. Auguste still made it. Every small bit of leverage matters in an endgame situation. Had Auguste not made both ends of that 1-and-1, Wisconsin might have been able to — at worst — hold for the last shot after the Irish’s steal-and-score. Because Auguste made both, the Irish’s position was undeniably better. It mattered.

One other note: After Vitto Brown’s three snapped a 53-all tie to give Wisconsin a late three-point lead, Notre Dame didn’t hunt the three. A very quick two immediately trimmed the lead to one (56-55) with just under 20 seconds left and applied game pressure to the Badgers. Mike Brey used the right tactics and had his team prepared. This isn’t a situation in which you knock the losing coach (Gard) for Nigel Hayes’s inability to control the ball; you praise the other coach for a smooth endgame sequence.

Now, Notre Dame — for the second straight season — gets to play a blueblood No. 1 seed in a regional final.

Good Friday is a huge pray-day for Christians everywhere. It was Brey day in Philadelphia. 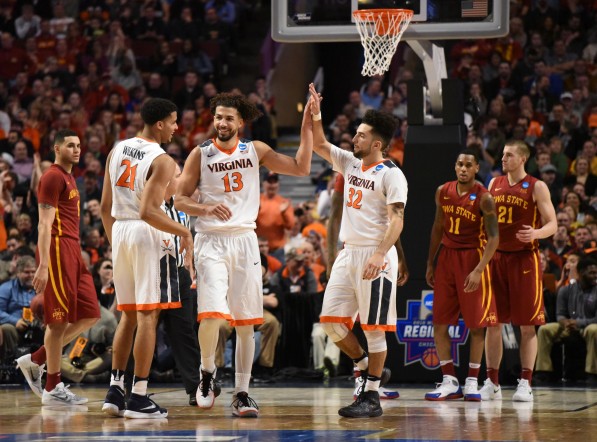 Mar 25, 2016; Chicago, IL, USA; Virginia Cavaliers forward Anthony Gill (13) and forward Isaiah Wilkins (21) and guard London Perrantes (32) celebrate after a basket against the Iowa State Cyclones during the second half in a semifinal game in the Midwest regional of the NCAA Tournament at United Center. Mandatory Credit: David Banks-USA TODAY Sports

The knock on Tony Bennett in the NCAA tournament was that his teams couldn’t score.

Are we beginning to realize that this was much more about Michigan State being in Virginia’s way the past two NCAA tournaments, and much less about any of the Cavaliers’ flaws?

Virginia made basketball look easy Friday night. Moreover, it did so in Chicago, with Iowa State fans making their collective presence felt. This was “Hilton Coliseum East,” but Virginia didn’t care. The Cavaliers roared to a 17-3 lead and were never seriously threatened. Whenever they needed a basket, they got one… almost always with a shot inside four feet of the tin.

Virginia played a very intelligent game — a few lapses existed, especially in a late-game drought Iowa State couldn’t capitalize on, but for 35 of 40 minutes, the Hoos made letter-perfect decisions.

At the heart of Virginia’s winning performance was the insistence of Malcolm Brogdon and London Perrantes on feeding the post, getting the ball to Anthony Gill and Mike Tobey against ISU’s lack of size in the painted area. Brogdon and Perrantes could have hoisted losts of fool’s-gold jumpers, but they rarely took the bait. They wanted to create the best shot for the team, and that meant passing the ball to their bigs.

Iowa State never found an effective counter. That was that.

Virginia now moves on to face Syracuse in the Midwest Regional final. Yes, Brogdon and Perrantes will have to hit a few jumpers in this one, but Brogdon will certainly try to get to the elbow areas against the zone with his dribble. He won’t want to settle for the 22-footers. He’ll probably need to make a few 15-footers and force Syracuse to attack him. This, in turn, will make dump-downs to Gill and Tobey more accessible as the game goes on.

All this aside, Virginia’s defense will be hard for Syracuse to crack. The Orange need Michael Gbinije’s best game to have a good chance. 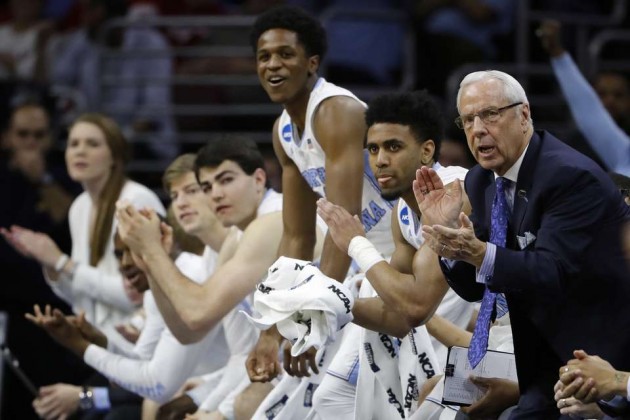 There’s not much mystery connected to the “why” of North Carolina’s win over Indiana late Friday night. The Tar Heels made a lot of perimeter shots, and when that’s happening, no one’s going to beat this team. That’s universally acknowledged in the college basketball community, because it’s the most obvious deficiency this team has had to deal with all season.

If Marcus Paige keeps the hot shooting stroke he displayed against the Hoosiers, this is the best team in the country.

If there’s a mystery attached to this performance, it might simply be: “Why did it take this long for Paige to find himself at the offensive end of the floor?” Well, now you’re getting into the business of trying to understand what 20-year-old human beings do in the klieg-light glare of pressure. That’s something one should try to avoid.

Just over two weeks ago, the Tar Heels boat-raced the Irish by 31 points in an ACC Tournament semifinal which was pretty much done and dusted a few minutes into the second half. North Carolina uncorked a 24-0 run over nine and a half minutes, bridging the first and second halves. That will be hard to replicate, as will UNC’s hot perimeter shooting against Indiana.

This game, to use a tennis analogy, is obviously on North Carolina’s racquet, but the Tar Heels can commit unforced errors such as silly fouls which get their bigs in foul trouble and strip the No. 1 seed of its advantages in terms of size and depth. Taking away the perimeter from Notre Dame’s shooters — without fouling — gives North Carolina its most direct path to victory on Sunday night.