On a night devoid of Sweet 16 drama, four teams cruised into the Elite Eight. None of them had to face excruciating endgame pressure. None of them had to contemplate their NCAA tournament mortality in the final few minutes of regulation. The fact that four teams stand on relatively equal footing in terms of the way they advanced make Saturday’s regional finals so hard to predict.

We’ll briefly look ahead to Saturday, but first, let’s take a few notes about Thursday for four happy teams that are now one step from the Final Four: 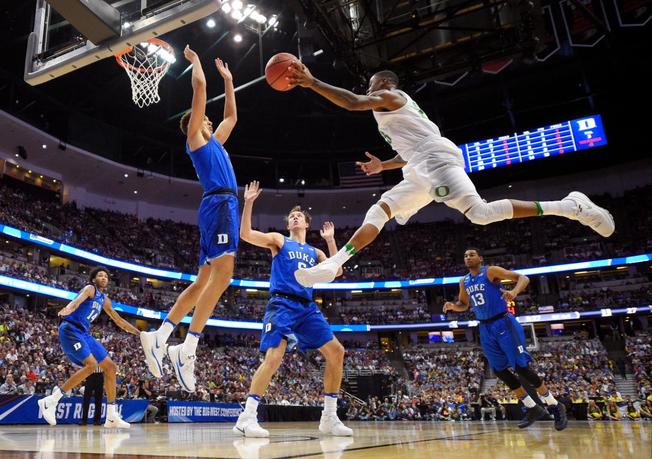 As soon as Duke’s Marshall Plumlee fell into early foul trouble, Oregon gained a crucial advantage over the Blue Devils. That said, the Ducks had to take advantage of that plot twist, and they did.

Oregon carried the weight of the school’s first-ever No. 1 seed in the round of 32 against Saint Joseph’s, but in the crucible of endgame pressure, Tyler Dorsey and Dillon Brooks answered the call by making huge shots. Oregon escaped from the first weekend, and when a highly-seeded team does that, the first game of the second weekend marks its chance to return to the court with a refurbished approach. The Ducks displayed exactly that against Duke’s inadequate defense, and as a result, they loaded up on Duck Dunks (and layups, and some threes as well) in Anaheim.

The crash-and-burn nature of this NCAA tournament for every other Pac-12 team created an uneasy feeling in advance of this clash against Duke. Oregon’s destruction of Utah on three occasions this season — especially in the Pac-12 Tournament final on March 12 — didn’t look as impressive after Gonzaga crushed the Utes a week ago. Oregon’s ability to not only beat Duke, but win authoritatively, doesn’t say a lot about the Pac-12 as a whole.

It does say that Oregon is a legitimately strong team in an otherwise-frail conference. The Ducks have secured that level of recognition, no matter what happens against Oklahoma on Saturday. 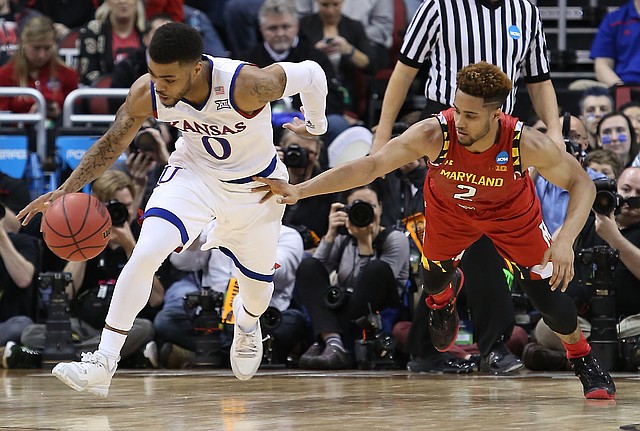 The Jayhawks have lacked a compass at the offensive end of the floor in the second halves of many of their NCAA tournament losses under Bill Self.

In the second half against Maryland, that aimless identity never truly appeared. It started with Perry Ellis, whom Maryland could never fully solve, but Wayne Selden and Frank Mason also played in control of themselves and their surroundings. Bad shots were kept to a minimum. The ball didn’t stick. Kansas made entry passes into the paint and various ball reversals from all sorts of angles and positions on the floor. The Jayhawks might have leaned on Ellis first and foremost, but their attack was anything but cookie-cutter. The monochromatic offenses from past NCAA exits was blessedly tossed aside.

Kansas is playing well, but it’s also playing smartly. Previous KU teams got stumped on offense in the second half of an NCAA tournament game; this team has not fallen into that trap.

Michael Grant, on site in Louisville for The Comeback, filed this report on the Wildcats’ easy romp against Miami:

Sweet 16: Hot-shooting Villanova is in a zone that’s tough to match https://t.co/OIOK5TCBdP pic.twitter.com/zShG8cazNP

In terms of a look-ahead to Saturday, Kansas certainly possesses the perimeter and wing defenders to make Villanova uncomfortable. As a point of comparison, Oklahoma — which is not as good as Kansas — torched Villanova during the regular season. Yes, it must be noted that the Sooners thrashed the Wildcats in late 2015, not three months into 2016. Villanova has grown and developed, using that loss as a teaching tool. Nevertheless, Kansas can defend the perimeter, so the good shot mix Ryan Arcidiacono referred to in Michael Grant’s story will have to come to the forefront for the Wildcats. 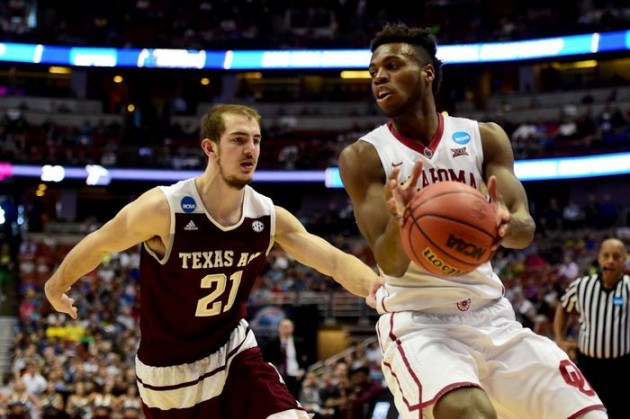 The two West Regional games in Anaheim had the feel of glorified pick-up games. Lots of freewheeling action and quick shots dominated the proceedings, especially in the second halves. Oklahoma and Texas A&M played a game largely devoid of structure and contained, crisp actions. Sooners-Aggies spilled all over the place, and Oklahoma had the roster much more suited to that type of game. The quicker and more powerful Sooners were able to play this game above the rim at times, while Texas A&M’s big men — playing at a higher weight class in a non-SEC, non-Kentucky game — looked utterly out of their element.

Saturday, Oklahoma cannot expect Oregon to back down the way Texas A&M did. The Sooners began their game against A&M as tight as a drum. They were paralyzed in the process of falling behind, 13-6, in the game’s first several minutes. As soon as a few shots started falling, though, OU relaxed. That’s consistent with everything this team has done — and how it has done it — all year.

Oklahoma and Oregon should play a close game, but one can envision a scenario in which one team gets on a roll while the other goes cold… and a 20-point halftime margin will emerge. One of the key parts of multi-stage advancement in the NCAA tournament is for certain players to step up when others aren’t at their best. Oklahoma is receiving that kind of complementarity from its roster.

In the round of 32 last Sunday, Buddy Hield carried Oklahoma in the second half. Against A&M, Hield was merely decent, but his shot didn’t regularly fall (6 of 13, 2 of 7 on 3-pointers). Jordan Woodard (8 of 11, 5 of 6 on 3-pointers) became the Sooners’ hot hand from the perimeter. Saturday, Hield or Isaiah Cousins (1 of 8 against A&M) will almost certainly need to go off. Woodard obviously hopes to shoot well, but in an event which consists of three two-game tournaments at three separate sites, it’s not often that you’ll see the same players flourish on Thursday and Saturday, or on Friday and Sunday. The teams that advance to Final Fours and win national titles are the ones that have some players emerge in game one of a weekend, and others in game two. Everyone does just enough to carry the whole operation forward, but if certain contributors aren’t at their best in one of the two games on a weekend, they rise up in the other game to balance everything out.

For Oregon, Dillon Brooks (4 of 9 on 3-pointers, 22 points) was a stud against Duke, while Tyler Dorsey (2 of 9 from the field) struggled on a 7-point night. Dorsey is therefore the player who needs to go off for the Ducks. Keep note of this game one-game two tension point when OU faces UO to start the Elite Eight Saturday evening.