Monday’s Kansas-West Virginia game is, like many other single games in a season with thousands of them, receding into memory. If Iowa State can surge in the next few weeks, the Mountaineers’ upset of the Jayhawks might affect the final Big 12 standings and become more memorable in the course of time. Yet, for fans outside of West Virginia, this game will likely be forgotten when March rolls around. The Mountaineers needed it to solidify their status as an NCAA tournament team. The rest of the nation is moving on. This is how the relentless 24-7-365 news cycle flows.

However, before you move on from this game, it’s worth taking two ideas from it… ideas that have nothing to do with the Jayhawks or the Mountaineers themselves.

West Virginia’s win over Kansas should first lead to a tangible reform in the officiating, administration and presentation of college basketball games. Second, Mountaineers-Jayhawks should also bring about an adjustment in how coaches handle one very specific endgame situation. We’ll start with the reform and then move to the coaching adjustment.

This point doesn’t need a lot of explanation. It just needs a few visual images.

In KU-WVU from Monday night in Morgantown, West Virginia, a good basket should not have counted due to a shot-clock violation:

What’s important to note about this occurrence is that it is not very isolated at all within the larger workings of the season, especially in the Big 12.

This past Saturday, a Kansas State basket should not have counted for the very same reason: 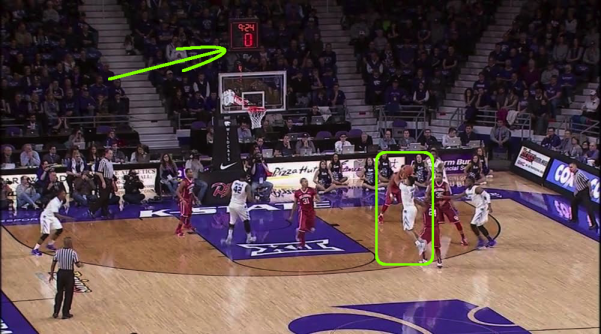 The Kansas State basket that should not have counted on Saturday against Oklahoma.                       Image courtesy of Rob Dauster and College Basketball Talk at NBCSports.com.

Forget the 30-second shot clock. The true reform college hoops needs as far as shot clocks are concerned is a move to tenths of seconds. It’s ridiculous not for officials to miss these calls… but for the officials to not have the best possible visual aids (and corrective replay measures) at their disposal. If we’re focused on getting as many calls right as possible — which is supposed to be the point of officiating and game administration — this reform will take place before the next college basketball season.

We’ll deal with the larger issue of college basketball endgame management in a separate piece. For now, we’ll examine one specific scenario which emerged in Kansas-West Virginia. It’s not a scenario which emerges very often, but when it does, coaches have to be willing to rethink how they handle it.

Generally, if Team A leads Team B by one score in the final half-minute of a game, and the differential between game clock and shot clock is under four seconds, you’ll instantly see Team B foul to extend the game. Team B wouldn’t want to allow all that time to drop off the clock — it wouldn’t have enough time left to push the ball down the court and get a good look at the basket.

What happens, though, when that game clock-shot clock differential is between six and seven seconds? The greater the differential, the more coaches on trailing teams will hope to get the defensive stop, even though they’re conceding 35 seconds in a game they don’t lead. It’s generally wiser to foul as a matter of regular practice.

There was in fact a differential of between six and seven seconds, and Kansas — leading by one — had the ball. West Virginia coach Bob Huggins did not foul. He gambled that his team — with the lightning-fast Juwan Staten — would be able to rush the ball up the floor and get a quality shot.

Kansas, with a one-point lead, did not use all 35 seconds on the shot clock. Frank Mason’s foray to the basket culminated in a shot attempt with a few seconds still left on the shot clock. West Virginia was able to get the ball and call timeout with 8.3 seconds left. The shot clock would have expired with around 6.5 seconds left, give or take a few tenths. Staten wound up scoring the game-winner for West Virginia, yes, but not in a live-ball situation. He was able to do so off a play drawn up in a timeout, and he had 8.3 seconds, not five or four, a far more marginal amount of time.

What follows is something coaches with one-possession leads should seriously consider in the final 10 seconds of a game when a game clock-shot clock differential is under 7-8 seconds, that range in which the trailing coach might roll the dice and not foul to extend the game:

If a player releases a shot with one second on the shot clock, and that shot takes nearly two seconds to reach the rim, no shot-clock violation has been committed as long as the ball does touch the rim. Let’s flesh out that point with numbers and apply it to Kansas-West Virginia:

Let’s say a Kansas player released a shot with 7.0 seconds on the game clock, which would have meant a fractional amount of time in the final second of the shot clock. Had that shot — a rainbow shot with a very high arc — hit the rim with 5.0 seconds left, no shot clock violation would have occurred.

See where we’re going with this?

Given the high arc on a shot that took forever to finally hit the rim, that same shot — had it not gone in the basket — would almost certainly have produced a long or high rebound, due to a high bounce off the rim. By the time West Virginia corralled the ball (and that’s assuming WVU was even able to get to the rebound first), there would have been around 3.5 seconds left in the backcourt.

Kansas, simply by throwing up a rainbow shot at the very end of the shot clock, could have manipulated time to take around 3.5 to 4 seconds away from West Virginia, severely reducing the Mountaineers’ ability to win.

You might scoff at this, but then realize that this is little different from intentionally missing a free throw when needing an extra possession in the final five seconds. The main difference is that missing a jump shot is a live-ball act, but is it really that hard to intentionally shoot a ball high into the air with the intent of hitting the rim? That’s what the white painted square on the backboard is for — if you can hit the inside of that square, you’re extremely likely to hit the rim on the bounce off the glass.

If coaches on trailing teams want to play it out and not foul with a game clock-shot clock differential of roughly 7-8 seconds, the coaches on the leading teams have a countermove they can use. The Kansas-West Virginia game can serve as an instructive example of what happens when the leading team fails to use this approach. It’s harsh to criticize Bill Self now — coaches simply do not make this move in present-day college basketball.

However, if we’re not seeing this move used in the 2015-2016 season, it will be harder to shield coaches from criticism if they fail to play endgame chess in such a manner.

One game on a Monday night in February could profoundly change college basketball in two different ways. It’s up to administrators (tenths of seconds on shot clocks) and coaches (7-second clock differential up 1 in the final 10 seconds of regulation) to make relevant adjustments.

We’ll see if they happen… or not.