On Wednesday, we viewed UConn women’s basketball through the lens of history.

Here, we’ll attempt to appreciate the Huskies and Geno Auriemma through the lens of what happens on the court — in practice and gameday situations alike.

Why include practice (especially for you, Hall-of-Famer-elect Allen Iverson)? It’s where Geno Auriemma has built the foundation not just of an all-time-great dynasty, but of a recruiting machine which isn’t likely to stop functioning anytime soon.

If you’re a high school basketball player who wants to be a star in Europe or the WNBA (or both), you want to be coached by Geno. It’s that simple. You see the finished product on television at the Final Four, but you also know that receiving instruction from Auriemma must obviously create a difference for the players who come through Storrs, Connecticut.

You want to benefit from that same difference.

What IS that difference? We’ll offer a look, and this quote is a pretty good place to start:

So on display rt now @UConnWBB Geno Auriemma quote "Some people practice until they get it right. We practice till we can't get it wrong."

It’s not just true for women’s basketball; it’s very much true for the men’s game as well, and it even creeps into the NBA at times: Players become specialists to the point that they’re not all-tool performers.

A 2-guard can shoot and dribble but not rebound.

A point guard can facilitate and dribble but not shoot.

An elite scorer at the 3 spot can’t defend well enough, trying to hide him/herself on defense.

In the frontcourt, 4s and 5s can score, rebound and block shots, but they can’t dribble in some cases, and can’t pass in others.

Not as a general rule but often enough to notice, players develop certain skills at the expense of others. They are placed in specific silos and become role players, which is hardly a bad thing. However, they don’t ripen into complete players.

Football is inevitably a sport of specialization. Baseball is a sport of specialization as far as pitchers, designated hitters, and end-of-the-bench guys (pinch runners, switch-hitting pinch hitters) are concerned. Yet, the broader canvas of big-time team sports is constructed such that complete players remain the ultimate ideal for any organization. LeBron James has long represented this concept, and Draymond Green and Kawhi Leonard are the younger and more updated (not necessarily better, but more new-age) embodiments of the same notion.

Yet, the NBA and women’s basketball are different in a number of fundamental ways, a chief one being that the men’s game is an above-the-rim game. Draymond is therefore unique in that he thrives as the undersized player in many matchups, but LeBron and Kawhi bring above-the-rim athleticism to the front of any basketball conversation.

The women’s game has not yet become an above-the-rim competition. How much does this reality affect your enjoyment of women’s basketball? That’s purely a matter of taste and preference, and we’re not here to make any commentaries on that topic.

What’s relevant about the lack of above-the-rim centrality in women’s basketball is simply this: You can’t shortcut your way to greatness. You can’t rely as much on role players, also referred to as well-delineated specialists. (Role players aren’t eliminated, of course, but the point of emphasis is that they’re not quite as prevalent.)

It has always been true that basketball isn’t a competition centrally decided by aerial prowess or brute strength. Positional leverage and shooting accuracy — beating opponents to spots on the floor and to loose balls, while making more shots — are not dependent on vertical leaping ability or raw muscle. Yet, in women’s basketball, these democratizing features are enhanced. There’s no Shaq to change the equation three feet from the basket. There’s no Wilt Chamberlain to rewrite the rules of basketball (the three-second lane violation in particular). There’s no freak athlete such as LeBron who overwhelms with equal parts court vision and physical dominance.

LeBron is a basketball specimen, but he’s also a physical specimen. The basketball skills and IQ make him most centrally what he’s become, but without that physical makeup, he wouldn’t be quite as overwhelming.

One turns to UConn women’s basketball, and there’s no player whose physical makeup is has the capacity to transform the game. Brittney Griner of Baylor and then the WNBA’s Phoenix Mercury (a champion in both places) is the one player who has come closest to fitting this category, but if you file through the historical record and scour the UConn program for that kind of game-changer, you won’t find one.

Diana Taurasi and Maya Moore are very much like Breanna Stewart, who just became — with teammates Moriah Jefferson and Morgan Tuck — the first four-time national champion in women’s basketball history. Stewart, as a basketball player, is physically unremarkable. She’s impressive, to be sure — she possesses length and a lean fluidity which helps her as a mover, shooter and defender. Yet, she doesn’t play above the rim. She is not devastatingly quick.

She is, however devastatingly effective.

Jefferson and Tuck are similarly effective, albeit on a smaller scale.

Isn’t that where coaching makes the difference?

This gets to the heart of why UConn women’s basketball is (and has become) so special on the court, in games and — yes — in practice. 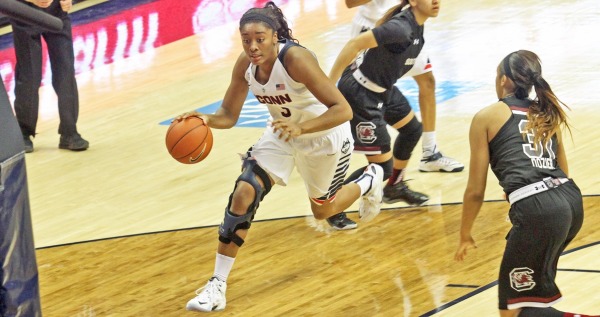 Morgan Tuck, a frontcourt plaayer who looks very much at home dribbling through a defense. That’s the Geno difference.

Maya Moore and Diana Taurasi have already won NBA championships. They weren’t just “very good college players” who then struggled in the pros. Even if one acknowledges that the NBA and WNBA are apples and oranges in many ways, it still remains that plenty of players will flourish in college but then face a substantial challenge at the professional level. It is worth noting — perhaps not too much, but at least to some extent — that UConn’s best players have had no trouble becoming complete pros.

The word “complete” is what sticks, because Geno Auriemma develops complete players in a women’s game which demands them.

This is the real essence of UConn: No matter the position on the floor, the Huskies — individually and as a group — do not encounter as many of the deficits which affect (and apply to) other teams.

You don’t see as many bigs who can’t adequately dribble or pass — not just in the low post, but in the open court.

You don’t see as many 2-guards and wings who don’t rebound reasonably well.

With UConn, you just don’t see as many one- or two-note players, specialists with specific points of emphasis accompanied by profound gaps in their overall toolboxes.

Women’s basketball isn’t won above the rim. Gravity-defying leaping ability can’t rescue a broken play or a fast break in which an opposing player has equal or slightly better position on the floor.

You can’t shortcut your way to greatness in women’s basketball.

By developing complete skill sets in his players, Geno Auriemma makes his players comfortable doing not just one or two things, but everything a basketballer needs to succeed on the court. This starts in practice, and it translates to games. Naturally, it translates from the college level to the WNBA and overseas leagues in Europe.

Recruits can see this. They want to go to Storrs.

Why would they want to go anywhere else?

The final point here is that it’s not beyond the power of coaches to teach the game in a way that players become fully-evolved basketball practitioners. Moreover, it’s not as though Pat Summitt didn’t do this at Tennessee; the problem is simply that her health issues got in the way of prolonging her career. Other first-rate basketball minds exist in the women’s game as well: Tara VanDerveer at Stanford and Muffet McGraw at Notre Dame certainly qualify. They’ve all been remarkably consistent at a high level for portions of their careers.

Auriemma didn’t take any shortcuts to get to the top and then stay there. We know the competition has to rise to another level. The point to underline is that the competition doesn’t have to reinvent the wheel. It just has to work better at creating complete players — the players who win college championships at UConn and then WNBA titles in the pros.