The college football regular season is still over four months away, but that hasn’t kept hardcore fans from tuning in this off-season to see their favorite teams — and quarterbacks — practice on a glorified platform.

In Columbus, head coach Urban Meyer asked his fans to help set a tone for his young roster that will be replacing 16 of their 22 starters from a year ago. The fan base answered by setting an NCAA spring game record attendance at Ohio Stadium last Saturday.

How beautiful is a warm-up session for fans of the Crimson Tide? On the television front, Alabama drew more viewers for their spring game than the NHL playoffs did during that same weekend.

This Saturday, college football fans will be keeping their eyes on some of the top quarterback battles across the county. Here is a look at five teams hoping to find more answers, as they wrap up spring practices with their two best signal callers in the spotlight.

After making a late-season appearance for the Badgers in 2015, it seemed like Bart Houston had the starting job locked down heading into spring. Now, as we head into the final scrimmage of the spring, the senior quarterback finds himself sharing first-team reps with redshirt freshman Alex Hornibrook.

Head coach Paul Chryst will handle tomorrow’s televised practice as just that. The Badgers won’t be splitting their rosters into teams, but more so into units of depth. So expect to see first-team guys going up against each other.

This will be good in terms of gauging quarterback progression– especially considering these two are the only healthy scholarship quarterbacks on the roster right now.

Houston has the edge in experience as a fifth-year guy, but Hornibrook is a quarterback that Chryst recruited and landed as a commit. The freshman saw reps last year throughout the spring, despite having Joel Stave and Houston on the roster.

He committed to Wisconsin when Chryst came on board, even though seven quarterbacks will on the roster. It’s clear that the Pennsylvania native is the Paul Chryst prototype at quarterback in the future.

The question is, can Hornibrook force the issue with this coaching staff that the future starts now.

After the Joel Stave era, there’s no doubt that offensive coordinator Joe Randolph is looking for consistency on the field. Whoever proves they can provide that should be able to win this battle throughout the fall.

Saturday will give fans a good look at where both guys stand. 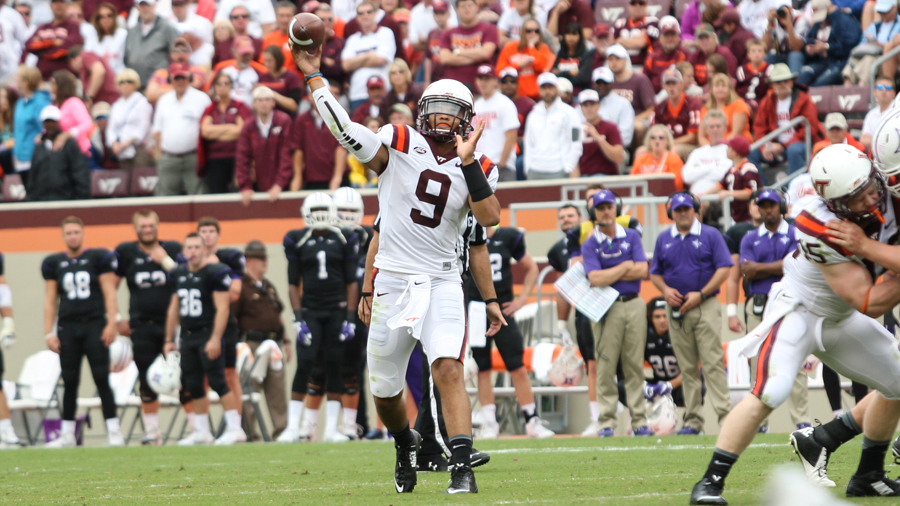 Who will be the first quarterback of the Justin Fuente era at Virginia Tech? That question is already fully-loaded before anyone even starts to analyze the players in line for the starting job in 2016.

Truth be told, the winner in this situation has to be the fans, who have been waiting for a more modern offense for quite some time. With Fuente, they’ll get to witness a much-needed face lift to their team’s offensive identity.

An up-tempo style bodes well for both quarterbacks in this case, even though the edge has to go to Jerod Evans — the junior college transfer that seems to be the perfect dual-threat for the Fuente offense. He has shared first-team reps with Brenden Motley, who started at times for the Hokies last year, replacing the injured Michael Brewer.

Motley has shown off his running ability, but really struggled in passing situations to find any consistency.

Evans threw over 38 touchdowns at the junior college level a year ago and averaged 395 yards per game in the air. At 6’4″, he best represents what Fuente has had success with in the past at quarterback.

A strong showing on Saturday could put him ahead in the race for good.

There is a certain comfort level of knowing that even though your starting quarterback isn’t returning from last year, at least you have two guys that have experience, itching to be the next at their position to step up and prove themselves.

That’s the case for Damion Terry and Tyler O’Connor at Michigan State. O’Connor has waited his turn behind both Andrew Maxwell and Connor Cook. Terry is the athletic playmaker that proved in the ten games he played last year, that he can be serviceable as an every down signal caller.

Coach Dantonio has a legitimate battle going on in East Lansing, that he doesn’t see rectifying itself until the Spartans play a couple of games in the regular season. As the coach noted earlier this spring, it’s stupid to name a starter until you get to September.

Especially when you have two guys that have led your team to key wins.

For O’Connor, it was perhaps the biggest upset of the year, a win over Ohio State on the road in November. The pro-style quarterback has shown good mobility in the pocket, but still needs to work on improving his ability with moving the ball down field.  The senior will get every opportunity to earn the starting job this fall and he could jump start his chances with a strong showing on Saturday.

On the other end of the spectrum, coach Dantonio has made it clear that practice isn’t where Terry needs to make his improvements. It’s in game situations. The junior ran the ball eight times against Ohio State and struggled to find any consistency throwing the football in the opportunities he did have.

His running ability was the major reason why he saw playing time in 2015, but now his blueprint for success has to based on showing he can lead a team with smart decision making and improved passing technique. 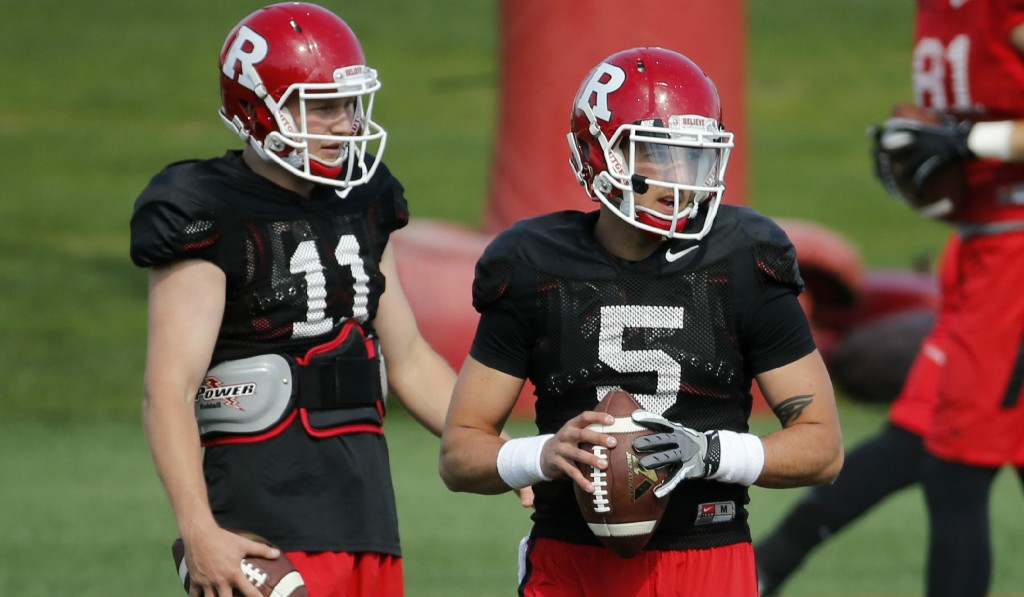 If anybody knows who they have at quarterback across the country, it’s new Rutgers head coach Chris Ash, who completely shut out both of his top signal callers as Ohio State’s defensive coordinator in 2015.

Even though both struggled against that mighty silver bullet defense, Chris Laviano and Hayden Rettig each made strides throughout 2015 to be program-leading quarterbacks. What is different this go-around is that both pro-style guys will be asked to adopt a power spread attack.

Laviano, who was favored by former head coach Kyle Flood, would seem to have the edge as his team heads into the final spring practice of the year. Ash told the media a few weeks ago that the returning starter was a few steps ahead of the competition.

On Tuesday, those sentiments didn’t exist, as the new ball coach said the competition is even between his three guys. That everyone was having good days and bad days and he expects the battle to go on through summer and into fall camp.

It sounds like Sunday’s scrimmage could be a barometer on which quarterback has the advantage heading into spring.

Laviano has an edge when it comes to fitting the system. The problem is that advantage comes after a year of running around, hoping he can elude the intense pressure of all the opposing defenses he faced.

Chris Ash has two capable guys at quarterback to start 2016. The problem doesn’t lie in figuring out which guy will start. That competition will sort itself out. They need to find a consistent rushing attack, and solid line protection to give their signal-caller a chance to make plays. 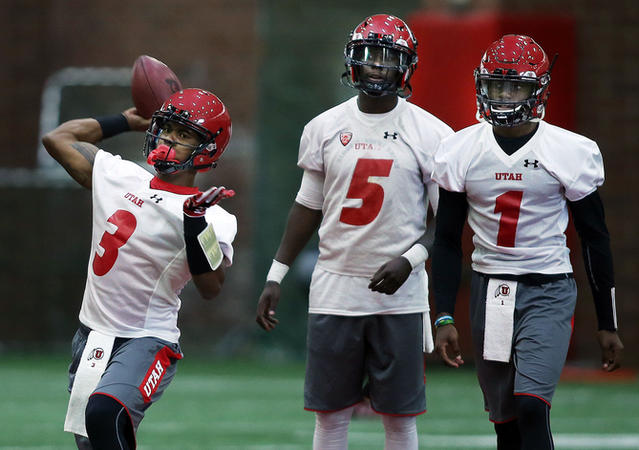 Not only will Utah’s quarterbacks be the most fun to watch on Saturday — this might be the best quarterback battle in the country outside of what’s taking place in South Bend. Nobody in coach Kyle Whittingham’s stable returns with a ton of game experience at the division I level.

The veteran in the program, Brandon Cox, battled against two seniors last year for playing time. The junior, who has bounced back from three-straight seasons of breaking his foot, seemed to have an edge on Williams, who transferred in to the program after stints at Washington and Santa Monica College.

Then Williams started to show off his accuracy, athletic ability and comfort in running Whittingham’s  Shotgun only offense. Many felt a few weeks ago that the former Huskie was going to steal the starting job away.

Now, Williams seems to be on the outside looking in, after missing nearly two weeks with arm soreness. He won’t compete on Saturday and is on the shelf until fall, creating what could be a three-way battle for the starting gig.

Freshman Tyler Huntley has impressed by flashing what he can bring to the future of the Ute program. Coaches have fallen in love with his strong arm and what that brings to their offense and how in a short time, the youngster has been able to display leadership qualities.

The offensive coaches will have plenty of decisions to make at the end of fall camp, but right now, this is a great problem for Utah to have.