After their first season in the SEC in 2012, the Tigers appeared to be in over their heads. Head coach Gary Pinkel was presumed to be on the hot seat, and questions lingered: Was Missouri, a perceived finesse team from the wide-open Big 12, going to be strong enough and tough enough to compete in the SEC? Two years later, that whispering has receded somewhat. Sure, the thought is that the SEC East has been weak because of the rebuilding of Tennessee and the hot mess that was the Will Muschamp era at Florida. Yet, Missouri has lost two regular season conference games the last two seasons: One on a missed kick in overtime in 2013 against South Carolina and an absolute drubbing by Georgia in 2014 (both at home).

However, Tennessee has brought in another highly rated recruiting class and appears to be getting stronger. Florida changed head coaches and has an absolutely killer defense. Georgia still looks like the class of the division, and South Carolina could be dangerous as well. Given all that, though, it would still be foolhardy to count Mizzou out until the Tigers are actually eliminated from contention.

2 Stats To Pay Attention To

98: Missouri’s ranking in total offense last season. The Tigers managed to win 11 games with an offense that was hardly setting the world on fire. That may be an understatement. Due to injuries to a rebuilding wide receiving corps and an ineffective Maty Mauk (in part because of a shoulder injury that he was fighting through), the Tiger offense went kaput after a relatively quick start. The nadir came during games against Georgia and Florida. While the Tigers went 1-1 in those two games, they managed to amass 266 yards of total offense. Over the course of two games. That’s… not good.

42: Number of sacks that the Missouri defense recorded in 2014. The Tigers were tied for ninth in the nation in sacks with Michigan State, and their 42 sacks led the SEC. The Tigers have actually led the SEC in sacks for two straight years. If they want to be in contention for the SEC East again, they need to be near the top of the league again.

3 Games That Will Make Or Break The Season

Why it matters: The game in Gainesville last season was a comedy of errors on many levels. Missouri managed seven first downs and 119 yards of total offense and won the game by 29 points thanks to four touchdowns on defense and special teams. Expect Florida to be improved on offense and animated in the pursuit of revenge, seeking to spoil Missouri’s homecoming.

Why it matters: The third game of what has become the standard early season gauntlet featuring South Carolina, Florida and Georgia, the Bulldogs have won two of the last three games against Missouri, including a 34-0 shutout last season in Columbia. Mizzou has won in its only prior appearance Between the Hedges, but would have to duplicate that feat in order to have a chance to return to Georgia in early December for the SEC Championship Game.

Why it matters: Tennessee is one of the teams besides Georgia who could win the SEC East. This late season game could ultimately decide the division. Missouri won last year by allowing only 53 yards rushing on 29 carries. That won’t happen again this season. 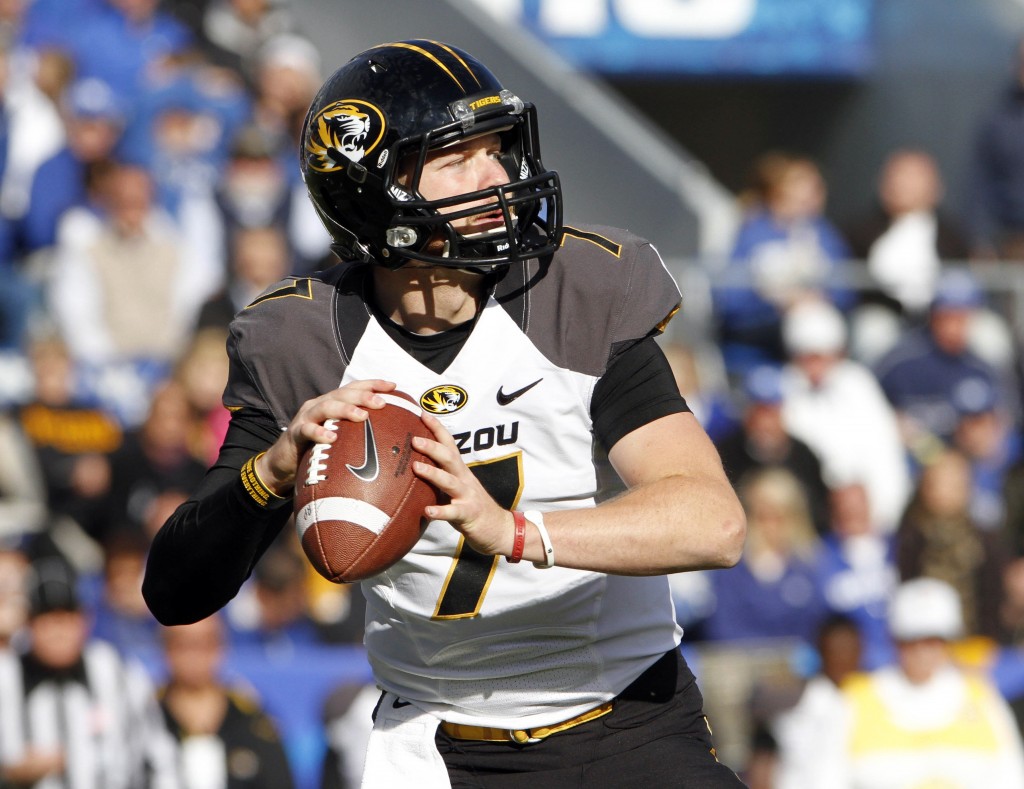 Maty Mauk’s growth and development as a quarterback during this off-season will be the key to how far Missouri can go in the SEC.

Maty Mauk, QB — It comes down to quarterback play in modern college football. Maty Mauk is not going to be a quarterback that completes 70 percent of his passes; that’s not who he is. However, Mauk plays big down the stretch of games. He needs to work on being more consistent in the first three quarters, however, so that he doesn’t have to try and put on a cape and help his team to victory late. If he can stay healthy for the entire season (which is a risk given that Mauk may have to run a bit more early in the season) and form a quick bond with one or two of his receivers, Missouri might be able to defend its division title.

Russell Hansbrough, RB — Hansbrough figures to be more of a feature back this season due to the departure of Marcus Murphy. Hansbrough carried the ball 205 times and might wind up seeing more carries this season, especially early on in the year as Maty Mauk and the receivers try to get on the same page. If Hansbrough can equal or improve on his 1,084 yards, that will help make life easier for the Tigers.

Michael Scherer, MLB — He was fourth in the SEC in total tackles last season with 114. He, along with WLB Kentrell Brothers, will anchor a ferocious back seven that should make life difficult for passers in the SEC. This is the case although it will be interesting to see how Scherer is used in new defensive coordinator Barry Odom’s scheme, and how the retooled front line impacts him in the middle of the defense. Higher tackle numbers from Scherer might not be a good thing for Mizzou.

Terry Beckner Jr., DT — Some fans might be scratching their heads right now, but given the season ending injuries suffered by defensive tackle Harold Brantley in a car accident last month, Becker might see the field sooner and more often than anyone could have expected.

5. Missouri will not lead the conference in sacks again.

As mentioned above, the Tigers recorded 42 sacks last season. Most of the players who recorded those sacks are not available either due to exhausting eligibility, leaving for the NFL, or because of season-ending injury. Defensive line coach Craig Kuligowski has been spectacular in the realm of player development and coaching, and the Tigers figure to be aggressive under new defensive coordinator Barry Odom, but they will not lead the conference in sacks in 2015.

4. The tight ends will be rediscovered in the passing game.

During the Chase Daniel Era, and even into the Blaine Gabbert years, Chase Coffman, Michael Rucker and Michael Egnew were key cogs in the Missouri passing game. The position took a backseat during the James Franklin years, but given the lack of experience outside at wide receiver, look for Missouri to utilize the tight ends early this season to help convert third-and-medium downs and keep the offense on schedule until the wide receivers get more experience.

3. The Tigers will rush for over 3,000 yards collectively as a team.

It clicked at the midway point last season for the Tigers on the ground. The offensive line, which struggled early in the season, came together as a unit; the team slowed the game down and leaned on the run. Russell Hansbrough went over 1,000 yards and Marcus Murphy came close to the total as well. With a veteran offensive line, a healthy Morgan Steward returning from a knee injury that kept him out all of last season, another offseason in the program for backup Ish Whitter, and a discussed emphasis on involving Maty Mauk in running the ball more, look for the Tigers to eclipse the 3,000-yard mark on the ground.

2. Missouri will drop a non-conference game.

One of the things that hurt the perception of Missouri last season was a loss to Indiana, an inferior Big Ten opponent. It was the first time Missouri dropped a non-conference game since a late-season loss to Syracuse that prevented Missouri from going to a bowl game in the program’s inaugural SEC campaign. This year, the most likely candidates for that non-conference loss would be the late-season game against BYU in Arrowhead or an early season contest on the road against Arkansas State.

1. Missouri will not win the SEC East.

This might not be that bold of a prediction, but given the tendency to astound people the last two seasons, who knows what could happen? The reality is that while Missouri has the talent to compete with most of the SEC, the dominoes have had to fall correctly for the Tigers make consecutive trips to Atlanta in December. Youth at the receiver positions and along the defensive line will cost Missouri a bit this season and will keep the Tigers from Atlanta in 2015.

Dave Singleton has been writing about sports and other stuff on the internet for over a decade. His work has been featured at Crystal Ball Run, Rock M Nation and Southern Pigskin. Born and raised on the East Coast, Dave attended college in the Midwest. He now lives in the Las Vegas area.