1 Burning Question: Will the Yellow Jackets Finish in the top 10 Again?

Georgia Tech was playing as well as any team in the country when the 2014-’15 campaign ended. Over the final four games of the year, the Jackets posted victories over No. 15 Clemson, No. 9 Georgia, and No. 11 Mississippi State. As a result of these wins, Paul Johnson’s squad finished the season ranked 8th in the AP Poll.

This impressive finish begs the question, “Can Tech do it again in 2015?”

There are plenty of reasons to think so. Quarterback Justin Thomas is back this season after finishing fourth in the conference in rushing and sixth in the league in TD passes. He’ll operate behind a veteran offensive line – led by tackle Bryan Chamberlain and center Freddie Burden – that helped Tech finish second nationally in rushing yards per game (342.07) and third in fewest sacks allowed (0.79 per game).

On the other side of the ball, the Jackets are poised for a fine season. Safety Jamal Golden (4 INT, 3rd Team All-ACC) and cornerback D.J. White return to anchor a Tech secondary that ranked 10th in the nation interceptions last year. The front seven – which finished second in the league in forced fumbles – is also in good shape, welcoming back an experienced unit that includes Adam Gostis (6.5 TFL, 1st team All-ACC), KeShun Freeman (9.5 TFL, 4.5 sacks), and PJ Davis (119 tackles, 8.5 TFL, 4 sacks). It will also get a huge boost from Jabari Hunt-Days, who regained his eligibility on August 1.

Georgia Tech is also solid in the kicking game. Punter Ryan Rodwell helped Tech flip the field on opponents last season, landing 13 of his 32 punts inside the 20. Kicker Harrison Butker was equally impressive, connecting on 4-of-6 field goals beyond 40 yards, including a 53-yarder against Georgia which sent that game into overtime, enabling the Yellow Jackets to ultimately win it.

2 Stats To Pay Attention to

228 – The number of 10-plus-yard plays that the Yellow Jacket offense generated last year, the 15th-best total in the nation. While a lot of college football experts don’t consider Paul Johnson’s triple option attack to be “cool,” there’s no disputing its results. Despite playing in a run-oriented offense, the Tech offense was one of the most explosive in the nation, producing more double-digit plays than Pac-12 champion Arizona, pass-happy Texas Tech, and archrival Georgia. The Jackets need this trend to continue this season.

3 – This is the number of games in which Georgia Tech failed to produce a turnover last year. For the most part, Paul Johnson’s squad did a great job of winning the turnover battle last season, finishing 14th nationally in turnover margin. However, the Jacket D failed to produce a turnover in three different games last year. While Tech had no trouble overcoming Wofford, the inability to come up with a drive-killing turnover cost the Jackets dearly in a six-point defeat to Duke and a two-point loss to Florida State, when one timely play would have won the game. If it’s going to return to the ACC Championship Game, Georgia Tech must come up with more turnovers, especially against the better offenses in league.

Three Games That Will Make or Break the Season

Why it matters: After winning the division in 2013 and finishing second a year ago, the Devils will be a contender again this season. New starting quarterback Thomas Sirk will pick up right where Anthony Boone left off, making the Duke offense every bit as dangerous as its been the past few seasons. Tech needs to win this game to start off conference play on a positive note.

Why it matters: When Virginia Tech was playing well last season, it was capable of beating anyone, as evidenced by the Hokies’ thrilling victory over eventual national champion Ohio State. While Frank Beamer and company struggled with consistency over the past few years, they’ll return to their winning ways in 2015, which could turn this contest into a de facto Coastal Division championship game.

Why it matters: No successful season is complete without a victory over your biggest rival, especially in a series that’s affectionately referred to as “Clean, Old-Fashioned Hate.” Whether both teams come into the contest undefeated or winless, this is a “must win” game. 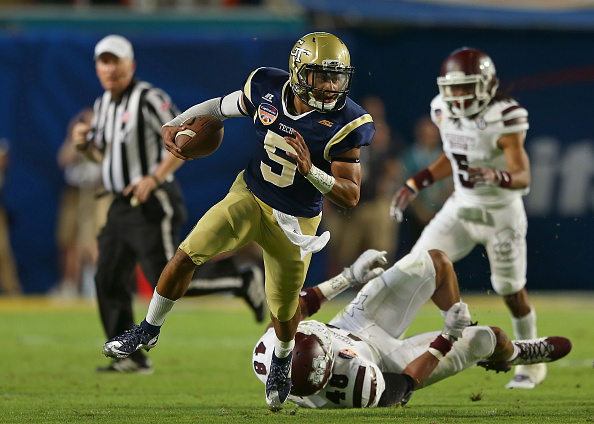 MIAMI GARDENS, FL – DECEMBER 31: Justin Thomas #5 of the Georgia Tech Yellow Jackets runs during the first half of the Capital One Orange Bowl game against the Mississippi State Bulldogs at Sun Life Stadium on December 31, 2014 in Miami Gardens, Florida. (Photo by Mike Ehrmann/Getty Images)

Justin Thomas, QB — Thomas was the most pleasant surprise in the ACC last year. A perfect fit for Paul Johnson’s offense, Thomas led the Jackets in rushing with 1,086 yards. He was also extremely dangerous as a passer, throwing for 18 TDs on just 187 throws, averaging a whopping 9.2 yards per attempt. With another year of experience and a veteran offensive line in front of him, these numbers will increase this fall.

Shamire Devine, RG — While Tech returns plenty of experience on the offensive line, it has the unenviable task of replace right guard Shaquille Mason (39 career starts), who earned All-American honors last year. Devine enters fall camp as the leading candidate to replace him after playing in 13 games a year ago. At 6′ 7″, 365 pounds, he has the both the size and the strength to open up huge holes for B-Backs Marcus Allen and Patrick Skov.

Jabari Hunt-Days, DT — A two-year starter at linebacker (129 tackles, 11 TFL) , Days was slated to started at a defensive end last season before academic issues curtailed his season. After learning he was ineligible, the Tech staff tried him out at defensive tackle on the scout team. He excelled in this role, with Mason calling Days the best defensive lineman he’d faced all season. Expect him to win the starting spot next to Gostis, giving Tech a powerful 1-2 punch in the middle.

Jamal Golden, FS/KR — A third-team All-ACC performer last season, Golden does a little bit of everything for the Tech defense. He excelled in pass coverage, finishing second in the league with four interceptions. He’s also a factor in the run game, recording 61 tackles – including 4 for a loss – and forcing three fumbles. Golden also doubles as the Yellow Jackets’ top return man, ranking third in the conference with 5 kick returns of 30 yards or more.

5. Georgia Tech’s run defense will be much better this fall.

There’s no way to sugarcoat it: The Yellow Jackets could not stop the run last season, allowing a whopping 5 yards per carry. With another year of experience under their respective belts and the addition of Hunt-Days, the Tech front seven will reduce that number by at least a half yard.

4. The ground game will rank in the top five nationally in rushing

This probably doesn’t seem like that much of a stretch, because the Yellow Jackets have never finished lower than sixth nationally in rushing since Johnson took over in 2008. However, with so many new faces in the backfield, many people are expecting a drop in production this season. It’s not going to happen in large part because…

3. Broderick Snoddy will emerge as an offensive weapon.

With so little experience at the skill positions, the offense needs some new starters to make an immediate impact. Snoddy will fill this role. Arguably the Jackets’ most explosive player, Snoddy made the most of his limited opportunities last year, rushing for 281 yards on just 28 carries (10.1) and catching 3 passes for 100 yards. While suffered a gruesome broken leg in the Clemson game, he’ll be back at full strength this fall, giving Tech the type of big-play capability it needs at A-back.

The Yellow Jackets haven’t won two in a row over the Dawgs since they took three straight in the series from 1998-2000. That will change this season. Georgia Tech’s secondary — which finished 10th nationally in interceptions — will pose a tremendous challenge for UGA’s new starting quarterback. It certainly did for Greyson Lambert — expected to be in the mix for the job — who threw two interceptions against the Jackets as Virginia’s starting quarterback last year.

1. Georgia Tech will win the ACC and finish in the Top 10.

While the Jackets ranked 20th in our poll, I personally think they’re a top-10 team. Behind a powerful running game, an improved defensive line, and secondary that comes up with timely picks, they’ll win the ACC and be in the mix for a berth in the College Football Playoff.