Last year was a completely different story. After racing out to a 5-1 start, the ‘Pokes lost five in a row to drop below .500, needing a win in the Bedlam rivalry to qualify for a bowl. With its back to the wall, OSU played its best football of the season, rallying to beat Oklahoma and Washington to avoid the school’s first losing record since 2005.

This fantastic finish to the 2014 campaign begs the question, “Will the Cowboys win nine games again this season?”

Defensively, the ‘Pokes are also in great shape. Most of the front seven – which finished second in the league in tackles for a loss and fourth in sacks – is back, including all-conference defensive end Emmanuel Ogbah (11 sacks). The secondary is equally experienced, welcoming back all four starters from a secondary that ranked fourth in the league with 61 passes defensed.

Oklahoma State should be solid on special teams as well. Kicker Ben Grogan returns after a strong sophomore season, in which he connected on 22 of 28 field goal attempts. Despite the loss of Tyreek Hill, OSU will have a return game with Jordan Stearns (30.0 punt return average) and Sheperd (21.3), who both did well in limited opportunities last season.

The Cowboys also boasted the best kick-blocking unit in the land, leading the nation with six blocked kicks.

2 – The number of fumble recoveries that OSU had last season, the lowest total in the country. Defensive coordinator Glenn Spencer uses a very aggressive scheme, which is predicated on forcing negative plays and turnovers. While the Cowboys ranked near the top of the Big 12 in sacks (4th) and tackles for a loss (2nd), they didn’t produce enough turnovers last year. If Oklahoma State is going to compete for the conference championship, the defense needs resemble the 2013 Cowboy D, which finished 17th nationally in fumble recoveries (12).

30 – The number of ‘Poke passing plays that went for 30 yards or more, the ninth best total in college football. Oklahoma State had one of the most explosive passing offenses in the country last season, connecting on 30 pass plays of 30 yards or more. Of course, that’s nothing new. The Cowboys have ranked in the top 15 in this category every year since 2010. That shouldn’t change with Ruldoph, who averaged 9.9 yards per pass attempt in three starts last season.

Why it matters: Oklahoma State players – especially those on offense – circled this game on the calendar as soon as the schedule came out. After all, the Longhorn defense dominated the Cowboy offense last year, holding it to season lows in points (7), rushing yards (34), and total offense (192). Expect the ‘Pokes to come out extra fired up in this one, eager to start conference play on the right foot.

Why it matters:  If OSU is going to win the Big 12 title, it must knock off the defending champion. That’s not going to be an easy task, as the Bears return 17 starters from last year’s championship squad, including running back Shock Linwood (1,252 yards rushing), wide receiver Corey Coleman (1,119 yards receiving), and Shawn Oakman, who led the Big 12 in tackles for a loss.

Why it matters:  Two words: Bedlam rivalry. Neither school will consider its season a success without victory over its most heated rival. 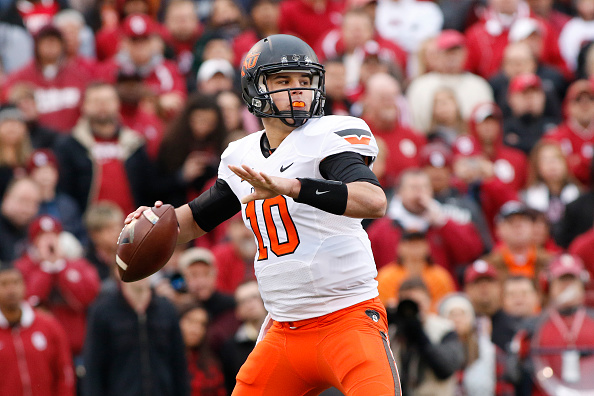 Mason Rudolph, QB — Many people criticized Gundy for not redshirting Rudolph last season. However, once he stepped on the field, it was apparent to everyone that Rudolph gave the Cowboys the best chance to win. In three starts last year, he threw for 853 yards, averaging an impressive 9.9 yards per attempt. Look for OSU to use his excellent arm strength to stretch the field and open up the running game.

Zac Veatch, TE — Make no mistake about it: Veatch will be an integral part of the offense in 2014. A starter at right guard last season, Veatch will serve as lead blocker in the running game. However, he’s also a capable pass catcher, hauling in the only TD pass in the spring game. With a skill set like that, don’t be surprised if he’s used a lot like James Castleman was in the Cactus Bowl.

Vili Leveni, DT — With the departure of Castleman — now with the Green Bay Packers — the Cowboy defense needs another run stuffer to emerge in the middle. Leveni is just the man to do that. He played well in limited opportunities behind Castleman last season, recording 4.5 tackles for a loss and one sack. Along with Vince Taylor — who had a monster spring — he’ll be the anchor of the OSU run defense.

Ashton Lampkin, CB — One of the keys to success in the Big 12 is solid cornerback play. While the ‘Pokes were relatively solid in this department last year (4th in the league in passes defensed), the addition of Lampkin will make this unit even better. He made an immediate impact as a starter last season, recording two interceptions and three pass breakups in the first four games before missing the final nine games due to injury. Expect him to be a central presence in the secondary.

5. J.W. Walsh will play a role in the offense this fall.

Even though Rudolph is the starter, Walsh will see time under center this season. With over 3,000 career passing yards and an impressive 5.5 yards per carry, Walsh has all of the tools to run the Cowboys’ offense. Whether he’s brought into the lineup to run the Wildcat or as an occasional change of pace, he’ll make a significant contribution.

4. The running game will improve substantially.

  In 2014, Oklahoma State ran for just 3.5 yards per carry, which was its lowest output since Gundy’s initial season in 2005. Regardless of whether it’s Rennie Childs – who showed flashes of brilliance this spring – Chris Carson, Todd Mays or some combination of the three at tailback, the Cowboy ground game will be much better than it was a year ago thanks to an improved offensive line, which now includes an offensive guard playing tight end. Couple that with Mason’s ability to stretch the field, and should equal an improvement of at least one yard per carry.

3. OSU will win the Bedlam Rivalry.

Yes, this probably doesn’t seem like that big of a stretch, since the ‘Pokes beat the Sooners in Norman last year. However, it’s worth noting that Oklahoma State hasn’t won two straight in this series since 2001-’02. OSU will do so this season because…

As noted earlier in the preview, Glenn Spencer’s aggressive scheme is designed to produce negative plays and turnovers. While the defense had no trouble making tackles in its opponents’ backfield, it didn’t generate enough turnovers. That won’t be a problem this season, as Spencer stressed the importance of taking it back throughout the spring. In fact, his message was so emphatic that it has its own hashtag, #WTIB.

Behind a polished passing game, an improved rushing attack, and an aggressive defense that produces turnovers, the Cowboys will win ten games and play in a New Year’s Day bowl game.