1 Burning Question: Can the Bulldogs maintain their improvement?

After five seasons and a cumulative record of 36-28 overall and 16-24 in the SEC, many wondered if Dan Mullen could get Mississippi State over the hump.

In 2014, the Bulldogs finally broke through. During one stretch of the year they beat three consecutive teams that were ranked in the AP Top 10. After starting 6-0, they rose to the number one spot in the AP Top 25 for the first time in school history.

The season left a bitter taste in Mississippi State’s mouth after the team lost three of its final four games, but the 10-3 season was what Dan Mullen and the Mississippi State fan base needed. Mullen answered the critics and delivered the best season of his coaching career.

Now the big question is if Mullen and his crew can repeat their magic. Heisman Trophy candidate Dak Prescott returns, but overall the Bulldogs return the least amount of starters in the conference.

A lot of questions will have to turn into answers if the Bulldogs want to maintain the record they posted in 2014.

19 — This is the combined number of sacks the Bulldogs will have to replace from four key members of their pass rushing corps. Preston Smith, Matthew Wells, Kaleb Eulis and Benardrick McKinney won’t be in uniform for the Bulldogs in 2014 and they leave big shoes to fill.

1,203 — This is the number of yards Josh Robinson ran for last season. Robinson stepped up in a big way in 2015 and the Bulldogs will have to replace him after his surprising early exit to the NFL.

Why it matters: Last year’s win by the Bulldogs was the first by Dan Mullen over LSU. The Tigers want revenge and something much better than their subpar 8-5 season in 2014. A win by Mississippi State will send a message to LSU and set the tone for the rest of the season.

Why it matters: Since coming to the SEC, the Aggies and Bulldogs have split four games. This is a game the Bulldogs have to win if they want to finish in the upper half of the SEC West. This game comes after the Auburn game, and if Mississippi State loses to Auburn, the Bulldogs can’t afford two straight defeats.

Why it matters: Despite having a great season, the Bulldogs lost to their archrival to end the 2014 regular season. The Rebels have now won two of three from the Bulldogs, and a third win in that span would really shift the in-state momentum to the Rebels. 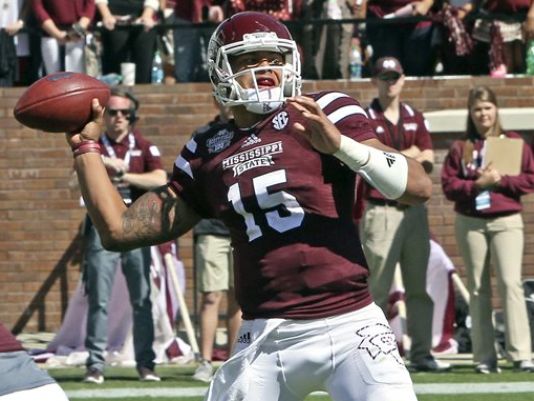 Ashton Shumpert, RB – Josh Robinson is a huge loss for the Bulldogs, but Dan Mullen has been able to find a quality running back when needed. Shumpert stepped up late last season and he will be a good fit with Dak in the backfield. Also keep an eye on Brandon Holloway — he will emerge as an effective change-of-pace option.

Chris Jones, DT – Is the former five-star recruit ready to blossom when the Bulldogs need him the most? Jones finished last season with 13 TFL, 8 QB hurries, and 3 sacks. With all the losses in the front seven, Jones will need to be their anchor.

Will Redmond, CB – Redmond has the knack for the big play. When the Mississippi State defense needed something to happen last year, he stepped up in multiple situations. Redmond made big strides last year and will be one of the better corners in the league.

Shumpert will likely share the load in the backfield, but in three of the last four seasons, the Bulldogs have had a 1,000-yard rusher. Shumpert is a downhill runner that fits well in the Bulldogs scheme. He will get the chance to prove he is the man early in the year.

4. The Bulldogs will beat LSU and Texas A&M for the second straight season.

Many have Mississippi State pegged for a downturn after losing so much talent, but the Bulldogs won’t fade as much as some think. Mississippi State will make some noise early by knocking off both LSU and Texas A&M.

3. Manny Diaz’s return to Mississippi State will have an immediate positive impact on the defense.

Since he left Starkville, Diaz is most known for his failed stint at Texas. Last year at Louisiana Tech, Diaz helped turn that team’s defense from 9th in total defense in C-USA to 2nd. Returning to Starkville will be a good thing for Diaz and Mississippi State. The Bulldogs’ defense won’t be world beaters, but it will improve, chiefly in terms of establishing a significantly better turnover margin.

Last year Prescott totaled 4,435 yards of total offense. As a senior, Prescott will make some better decisions and that will help him to establish a presence in the Heisman picture throughout the season.