1 Burning Question – Just what will the immediate impact of Jim Harbaugh be on the field?

Improvement is a funny thing, and your metrics might not be the same as someone else’s. Most times when you coach, you measure it as “we want to be better in some way every day,” and that’s where success is. In the end, “wins and losses” define it. When Harbaugh was hired, people outside the know were shocked because that’s how they are, but either way there was the collective gasp you get when playing poker thinking your straight has the hand and then someone drops down four of a kind.

The respect for Harbaugh’s coaching acumen can be seen in this ranking (though, to be honest, the author had them higher). Michigan was 5-7 last year and sputtered miserably under the weight of embarrassing losses, hemorrhaging attendance numbers, off-field controversy, and general all-around embarrassment. Harbaugh brings success at every level he’s competed, and to extreme levels considering where he found all of his stops before he got there.

Harbaugh enters this campaign at Michigan as his self-professed dream job, willing to put his heart and soul into it. One has to wonder what that means, because Jim Harbaugh hasn’t slept I don’t think since the late 1990s. When they remake “Independence Day,” the final scene should have Harbaugh standing there in khakis and a marker as all the aliens get back on the board and flee out of fear.

Maybe that’s a bit much, since Michigan has a lot of questions to answer, but Brady Hoke and staff recruited well. The cupboard is not bare. The schedule is less arduous than last year. Michigan should be one of the most noticeably improved teams in college football from the previous season, every day, and in wins and losses.

-1.33 – turnover margin per game, bad enough for 121st in the nation. Turnover margin is sort of a red herring at times. Hell, Wisconsin and Florida State were both sub-100 in the nation in turnover margin, but when it comes to Michigan it really isn’t. The Wolverines stunk at holding onto the ball and put the defense in positions that make defenses hate offenses. You can withstand stupidity if you’re good enough to overcome it. Michigan wasn’t. It needs to be somewhere less than morbidly bad if the team wants to improve its record. Only three teams were worse last season in this category.

55.4 – The catch rate of the returning Michigan wide receivers who caught at least one ball last year. Part of this is on the quarterback, because it’s like a relationship — if one person’s trying really, really hard, usually it can reasonably work out. However, a 55-percent catch rate for wide receivers is pretty gawd awful. Gone is Devin Funchess, who was marketed as some sort of tight end/wide receiver destroyer of souls, but his catch rate wouldn’t have helped much. Michigan desperately needs to find some deep threats and reliable hands. It’s amazing to think of all the great Michigan receivers over the years and see how far the program was from having even one of them last year.

Why it Matters: It’s The Game. It’s the greatest rivalry in college football. Even when it doesn’t matter in the standings, it means everything. “Jim Harbaugh v. Urban Meyer I” should be high-quality theater, especially in Ann Arbor.

Why It Matters: Absent the fact that Michigan State has been pushing Michigan around for the last several years at an unprecedented clip in the rivalry, MSU is also made hay in the recruiting game and now finds itself where Michigan used to be … pushing and shoving around the top 10, battling Ohio State for national bragging rights. This is a huge home tilt for Michigan, which would like to establish old dominance over its in-state foes, especially when those in-state foes are a routine national power these days. Recruits will be watching to see if the new-look Wolves can do what the past two staffs couldn’t come close to doing.

Why It Matters: Had Michigan not been an economy-sized bag full of low moments last season, getting housed by Utah at home after a delay that saw about 15 people actually finish watching the game in the Big House was basically the obvious wallpaper image of Michigan’s season. Utah should be flirting with a preseason top 25 ranking, and it’s the first game out of the gate for the new staff. Michigan would like to hope it will go better than the last time the school initiated a new head coach with a game against Utah … (the Rich Rodriguez era). 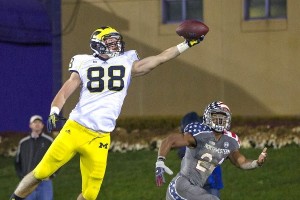 Jabrill Peppers, Hybrid – Peppers came to Michigan with the flair and hype of no recruit seen around these Ann Arbor parts since some guy named Charles Woodson came to town. However, his freshman season was a wash, and depending on whom you talked to, it was either discord with the coaching staff in addition to injury, or just injury. In the Spring Game, D.J. Durkin had him deployed all over the place, basically a begetter of terror, which means if nothing else, he has a role this season. He was stout against the run in the Spring Game, and has a little “jack of all trades, master of a bunch of said trades” working for him.

Joe Bolden, LB – Bolden was in on over 12 percent of Michigan tackles last year, which is the best returning percentage on the team. Someone has to take over the gaping leadership and tackling roles vacated by Jake Ryan, who decided to graduate. Michigan actually has an immense amount of talent on defense, and Bolden is sort of like the Sam Adams summer pack: There’s nothing that’s going to knock your socks off, but everything is good.

Jake Butt, TE – Butt was the most sure-handed player on the roster last year, with a catch rate of over 72 percent. He came back quickly from a nasty knee injury to provide good production last year. Given that from our only peeks at Michigan’s offense, the wide receivers looked like they’d struggle to separate from a mailbox, Butt will probably be utilized more than he ever has. Which … that will make screaming “throw it to Butt!” at the television seem a little less hopeless.

Wayne Lyons, CB – As good as Michigan’s defense was at times, it couldn’t seem to intercept rain in Seattle, having only three interceptions of teams not named Northwestern all season. Lyons is a transfer from Stanford, which was decidedly better at doing the intercepting thing than Michigan. It more than makes up for the loss of Blake Countess, who seemed to regress every season in Ann Arbor so he took it on the arches. Durkin coached foul-tempered secondaries at Florida, and Lyons would be a good catalyst for beginning such things at Michigan.

5. Jake Butt will make an All-Big Ten team at the very least.

Michigan’s offense resembled steaming hot refuse in the Spring Game, but it’s sort of disingenuous to assume that’s what you’re going to start with in the fall. Butt has actually been pretty good when Michigan has bothered to throw the ball to him. First impressions suggest this will probably be a Michigan team that looks a little more like your father’s Michigan teams, which means more use of the tight end, which means Butt will get chances to shine. He will. Bold, and all.

4. Jabrill Peppers will become a defensive All-American and moonlight on offense, ala Charles Woodson.

Durkin has to be looking at Peppers the way you do when you’re on an eight-hour drive in the middle of nowhere and you come across the first exit with restaurants that you’ve seen in five hours. His role coming out in the spring was basically all over the place, stuffing the run, dropping back in coverage, and just being a general pest toward all things offense. Durkin seems to get the most out of players like this, and as non-game-breaking as some of the receivers look right now, I’m sure they’ll spice things up by tossing a little Peppers in the offensive salad.

3. Michigan will be top 30 in turnover margin.

That’s sort of an ambiguous number, but considering what a grease fire it was last year both in terms of trying to create turnovers and avoiding creating turnovers for other teams, this would be a marked improvement. It will mostly come with the likely starter at quarterback Jake Rudock, a transfer from Iowa who — if he does anything particularly well — is not make horrendous mistakes for the most part. He won’t be the Mars Volta album that Devin Gardner seemed to be every Saturday, and that should lend some stability to an offensive line that was downright rough last year.

2. Michigan will finish no worse than second in the Big Ten East.

You’re putting a lot of faith in a lot of improvement with this one, but it’s called “bold” predictions, not “tepid predictions you can reasonably walk back in a few months if they’re wrong.” The schedule sets up well for potential upsets with both Ohio State and Michigan State at home, and you miss Wisconsin, Nebraska, and Iowa out west. You throw in some generally better football and cohesion, and this thing will turn around quickly. Michigan isn’t bereft of talent. The Wolves happen to have a lot that was just not well-coached.

In the end, this is where you’re measured at both schools: what did you do against the other. While the heat of the rivalry is still at boiling temperatures, the shine of beating Michigan has to have lost a bit of luster as Ohio State lately just seems to need to show up to get the wins. At any rate, Jim Harbaugh teams at Stanford and in the NFL seemed to understand the importance of rivalry, and none of them, at any level, are as big as this one. The Game will be back the only way it can be at this point, and that’s with a Michigan win that will harken OSU fans back momentarily to the days of early Lloyd Carr – John Cooper.