1 Burning Question: Can the Gamecocks regain their mojo after a down season?

Success didn’t come easily for Steve Spurrier at South Carolina. His first five seasons in Columbia netted a 35-28 overall record with a 18-22 SEC record. Many wondered if Spurrier’s best days were behind him. Spurrier and the Gamecocks answered the critics in 2010 when they won the SEC East and took part in their first (and only) SEC Championship Game.

Building on their success, the Gamecocks soared to great heights from 2011 to 2013, boasting an overall record of 33-6 and 18-6 in the SEC. The Gamecocks had cemented themselves as one of the teams to beat in the SEC East.

Then Connor Shaw and Jadaveon Clowney left, and the Gamecocks decided to take a trendy chance with their defense by experimenting with the 3-4 alignment.

It wasn’t as easy as losing two players, but the Gamecocks definitely lost their way in 2014, as the move to the 3-4 was not a success. It all started with a public beating at the hands of Texas A&M. They rebounded with a close win over Georgia, but that would be the highlight of their season. The Gamecocks finished the season with losses to Missouri, Tennessee and Auburn. They also lost to Clemson for the first time since 2008.

We’ve seen Steve Spurrier build South Carolina into a credible contender in the SEC. After a down year, can Spurrier get the Gamecocks back on track, or has he missed his window?

The key for South Carolina is the defense, and the Gamecocks have brought in Jon Hoke to help last season’s embattled defensive coordinator, Lorenzo Ward, right the ship. If the Gamecocks can resurrect a defense that tanked last year, they will rise right back to the upper echelon of the SEC East.

5.37 — This is the average number of yards per carry the Gamecocks’ defense gave up in 2014. A once proud defense simply couldn’t stop the run, as it not only gave up a league-worst 5.37 ypc, but also a league-worst 29 rushing TDs.

14 — This is the number of sacks South Carolina accumulated last year. In 2012, the Gamecocks led the SEC in sacks with 43. Two years later, they were the worst in the conference.

Why it matters: South Carolina had just come off back-to-back-to-back 11-2 seasons, but in the 2014 opener, the Gamecocks got embarrassed by Texas A&M. It turned out that A&M wasn’t very good in 2014 and neither were the Gamecocks. This game is about getting that win back and some of the mojo the Gamecocks lost when the Aggies routed them in Williams-Brice.

Why it matters: The Gamecocks have lost two straight to the Vols by the slightest of margins. The Vols are a team on the rise and the Gamecocks can’t afford to lose three straight to Butch Jones and his team. This game is about keeping their spot in the SEC East and holding down the upstart Vols.

Why it matters: Up until last season it felt like the Gamecocks owned Clemson. That all changed in one season, and with Deshaun Watson at the helm, Clemson looks like a really tough game this season. South Carolina needs to win this to regain its dominance in the Palmetto State. 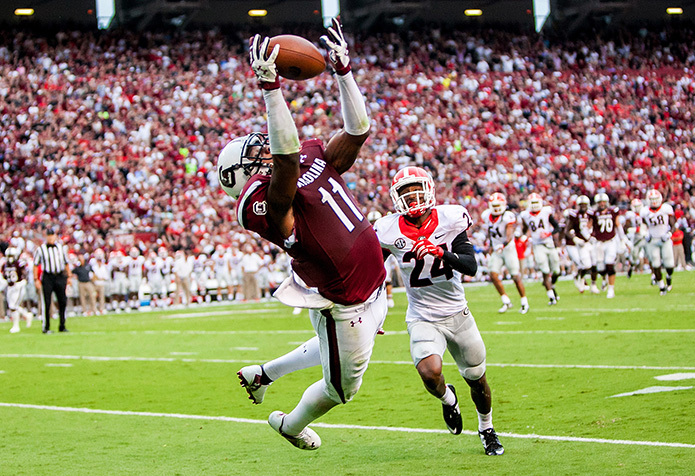 Connor Mitch, QB – When the Gamecocks lost Connor Shaw after the 2013 season, they lost their heart and soul. Dylan Thompson wasn’t horrible for the Gamecocks last year, but he was missing something. Can Mitch be the man that gets South Carolina back to the level it occupied just over a year ago?

Pharoh Cooper, WR – He caught 69 passes, ran for 200 yards, and threw 2 TD passes in 2014. Cooper seemingly came out of nowhere to become one of the most exciting players in college football. Teams must account for Cooper on every play, no matter where he is lined up.

Skai Moore, LB – As a sophomore, Moore led the Gamecocks in tackles. This year, with the switch to the 4-3, Moore is going to really be able to use his athleticism to his advantage. With an ability to stuff the run, get after the quarterback, and succeed in coverage, Moore could be the best player on the field this year in many of his games.

Marquavius Lewis, DE – South Carolina is in desperate need of an edge rusher, and Lewis is a player who can provide immediate help for the Gamecocks. As a premier JUCO prospect in 2014, Lewis tallied 11 sacks. “Quay” could be the man who makes or breaks the Gamecocks’ defense in 2015.

The Gamecocks made the switch to the 3-4 defense last year because it was the trendy thing to do. They didn’t have the coaches or players that fit the 3-4 mold, so after the failed experiment they are moving back to the 4-3. With the move will come comfort, familiarity and results.

In 2011, Wilds was a promising freshman who ran for almost 500 yards. He was hampered by injuries in 2012 and 2013. In 2014, he played second fiddle to Mike Davis but regained the promise that the Gamecocks had once seen in him. 2015 will be Wilds’s year, and he’s poised to have his best season ever as a Gamecock.

3. Pharoh Cooper will finish in the top 5 of the SEC in all-purpose yards.

Last year only one SEC wide receiver finished in the top 5 of the SEC in this category. His name was Amari Cooper. Carolina’s Cooper finished eighth last season. The Gamecocks will be more in control this year and that will help Cooper. He will be the focal point (along with Wilds) of the Carolina attack, and Cooper will get the ball in multiple positions on the field. This will aid him in cementing his status as one of the most dynamic players in the conference.

2. The Gamecocks will challenge for the SEC East title.

South Carolina has only been to the SEC Championship Game one time, but the window is wide open. With Missouri having gone the past two seasons, anything is possible. The Gamecocks do pick up a tough cross-divisional matchup in LSU, but as they come down the stretch of the season and play A&M, Tennessee and Florida, they will be a factor in the SEC East race… unlike last season.

1. The Gamecocks will have the most improved defense in the SEC.

When South Carolina lost its way in 2014, it was because of its defense. One year after a debacle on that side of the ball, the Gamecocks are rebuilt and will be much better. With an athletic young linebacker corps and an improved pass rush, the Gamecocks will have the most improved defense in the SEC.