1 Burning Question: Will The Devils Win 9 Games for the Third Year in a Row?

With that in mind, the only logical question to ask is, “Can the Devils do it again this year?”

It’s certainly possible. Sure, Duke loses consensus All-American right guard Laken Tomlinson, two-time All-ACC wide receiver Jamison Crowder, and two-year starter Anthony Boone at quarterback. However, there’s still plenty of talent to work with. Leading rusher Shaquille Powell is back this fall, as are Shaun Wilson (598 yards) and Jela Duncan (562 yards in 2013). In addition, the receiving corps will get a huge boost this fall with the return of tight end Braxton Deaver (46 catches for 600 yards in 2013), who missed last season with a torn ACL.

That’s got to be welcomed news to starting quarterback Thomas Sirk, who made the most of his opportunities last year, completing 71% of his passes, including the game-winning score against Virginia.

Defensively, the Devils are also in great shape. While it loses Kelby Brown to a career-ending injury, the D welcomes back six starters from a unit that ranked 24th nationally in scoring defense, 34th in passing defense, and 34th in forced fumbles. That total includes all five starters in the secondary, which limited opponents to just 206.8 yards per game through the air last season.

Duke also has plenty of weapons on special teams. Kicker Ross Martin finished third in the country in field goal percentage (90.5) and made all 18 of his attempts inside 40 yards. The return game is equally solid with DeVonte Edwards running back kickoffs (25.6 KOR average, 21st nationally) and Ryan Smith returning punts. Smith averaged 22.5 yards per punt return as the backup behind Crowder last year.

13 — This is the number of sacks that Duke gave up last year. The Devils did an excellent job of protecting the quarterback in 2014, allowing an average of just one sack per game.

45 — This is the number of times an opponent converted on a red zone opportunity. There’s no way to sugarcoat it: the Duke defense was horrible inside the red zone, allowing opponents to score on 45 out of 51 opportunities. If the Devils are going to win nine games again this season, that number must improve.

Why it matters: Let’s be honest: getting blown out by the Tar Heels was devastating. Not only did this crushing defeat give UNC bragging rights for the next year, it also knocked the Devils out of the ACC Championship Game. Since the players were undoubtedly reminded of this dreadful outcome throughout the offseason, they’ll play with a little more fire this fall.

Why it matters: In our Top 50 Preview of Virginia Tech, I talked about how the Hokies are a threat to win the Coastal because of their smothering defense and much improved offensive line. That makes this game a “must win” for Duke if it’s going to compete for the division crown.

Why it matters: I think the Yellow Jackets are the team to beat in the ACC this season. Sure, the Jackets lose some key players on offense, but quarterback Justin Thomas returns, as do four of the five starters on the offensive line. Duke needs a “W” in this contest to start off league play on the right foot and avoid falling essentially two games behind the defending champions right off the bat. 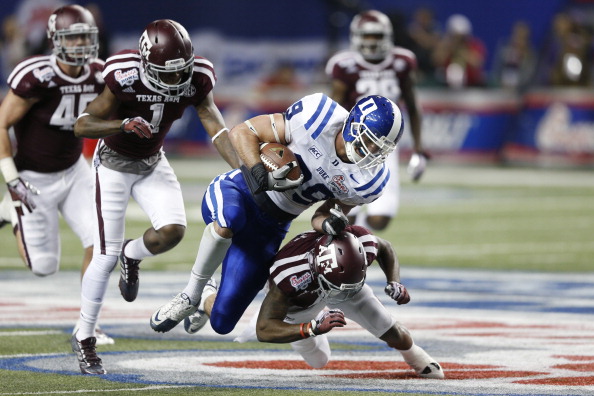 Braxton Deaver, TE – Deaver was one of the top tight ends in the ACC in 2013, earning third-team all conference honors. He was the Devils’ second best target that season, catching 46 balls for 600 yards and 4 TDs. With the departure of Crowder, he’ll be Duke’s go-to receiver this year.

Thomas Sirk, QB – Used mostly in Wildcat situations last year, Sirk will take over as the starting quarterback in 2015. While best known as a solid runner (238 yards, 5.06 ypc, 8 TDs), Sirk is a very accurate passer, completing 10-of-14 (71.4%) of his throws for 67 yards and 3 TDs. It’ll be interesting to see how head coach David Cutcliffe uses him this fall.

DeVon Edwards, S – One of the most underrated players in the league, Edwards finished second in the conference in tackles (133) last year. A versatile defender, he did a little bit of everything for the Devils last year, recording 4.5 sacks, forcing five fumbles, and breaking up a team-high nine passes. Expect him to do more of the same this year, especially with the unexpected loss of Kelby Brown.

Jeremy Cash, S – Another jack-of-all-trades type of player, Cash did a number of different things for Duke’s D last season. He was the Devils’ most effective pass rusher, leading the team with 5.5 sacks and 5 QB hurries. But, he also excelled in coverage, breaking up seven passes and finishing second on the team with two interceptions. He also led the team in TFL (10.5) and forced four fumbles.

5. Duke’s offensive line will rank in the top 20 in fewest sacks allowed.

This prediction will undoubtedly raise a few eyebrows. After all, the Devils lose 95 career starts with the loss of Laken Tomlinson and Takoby Cofield. However, Duke found itself in the same boat last season, needing to replace 91 career starts with the loss of Perry Simmons and Dave Harding. Despite those heavy losses, Duke allowed fewer sacks in 2014 (13) than it did the year before (17). With offensive line coach John Latina returning for his fourth season, there’s no reason to think this trend won’t continue.

A few weeks back, I wrote that Sirk would have a huge impact as a first-year starter. Now entering his fourth year under Cutcliffe’s system, he should be able to run the entire offense without any limitations or restrictions that most signal callers face in their initial season.

3. The secondary will have at least one player on the All-ACC team.

As noted earlier in this preview, DeVon Edwards and Jeremy Cash make a lot of plays. Whether it’s making tackles, sacking quarterbacks, forcing fumbles, or breaking up passes, these guys will disrupt opposing offenses. If each player posts the same numbers that he did last season, it’s tough to see either of them not earning postseason honors this year.

2. Braxton Deaver will be a Mackey Award finalist.

If he merely matches his 2013 production, Deaver would have similar numbers (46 catches, 600 yards, 4 TD) to last year’s winner Nick O’Leary (48 catches, 618 yards, 6 TDs). However, I expect him to have a bigger role in the Duke offense this season, making it more likely that he’ll have better stats than any other end in the country. That should at least make him a finalist, if not the ACC’s second straight winner.

1. Duke will win 9 games for the third straight year.

Thanks to an excellent secondary, a solid offensive line, and a strong performance at quarterback, the Devils will win nine games again this season.