From 2004-2011, Virginia Tech was the gold standard for ACC football. During that highly successful run, the Hokies won four ACC titles, posted double digit wins every season, and never finished lower than second in the Coastal Division.

The last three years have been a completely different story. Since 2012, Tech is just 12-12 in conference play and finished fourth or lower in its division in two of the past three seasons. The Hokies were consistently inconsistent last fall, posting a win over eventual national champion Ohio State early in the year, while suffering a head scratching 6-3 2OT loss to Wake Forest at the end of the season.

That last sentence begs this question: Will Virginia Tech return to prominence this fall?

There are plenty of reasons to think that the Hokies can compete for the ACC championship this year. The defense welcomes back eight starters from a unit that finished in the top 10 nationally in sacks (4th), tackles for a loss (6th), third-down percentage (4th), and red zone defense (6th). It will also get a huge boost with the return of defensive tackle Luther Maddy (32 career starts, 3rd team All-ACC in 2013) and cornerback Brandon Facyson (12 starts, 3rd-team All-ACC in 2013), who both missed most of last season with injuries. Their additions to the lineup will make the D even tougher than it was a year ago.

While the defense will ensure that Tech is in every contest, it’s the offense that will ultimately determine the success or failure of the 2015 campaign. With eight starters coming back from last year’s squad, the Hokie offense is much more experienced than it was last season. Judging by how well it played in the last two games of 2014 (383.5 yards per game, 4.85 yards per carry), there’s no reason to think that the Virginia Tech offense won’t be significantly better in 2015.

4 – This is the average yards per carry that Virginia Tech must reach in order to be successful. From 2004-’11, the Hokies went 51-3 when they averaged more than 4 yards per rush. They’ve enjoyed similar success the past two seasons, going 5-1 when cracking the 4-yard barrier. If Virginia Tech is going to get back to being Virginia Tech, it must hit this number more often.

5.04 – The average yards per carry that Virginia Tech allowed during its five losses last season. As well as the Hokie D played last year, it did struggle against the run in conference play allowing an average of 181 yards per game. However, it’s worth noting that Tech allowed just 3.5 yards per game on the road last year, which is where most of its toughest games will be played in 2015.

Why it matters: Every successful season includes a win over your in-state rival. The Hokies have dominated this series recently, winning the 15 of the last 16 meetings. There’s no way that this year’s team – especially the seniors – wants to be the one which allows an 11-year winning streak over the ‘Hoos to end.

Why it matters: As Kevin McGuire wrote in our Miami preview, 2015 could be the year that Miami finally breaks through in the ACC Coastal Division. If he’s correct, this game will be one of the more important contests in this rivalry since 2000, when the ‘Canes and Hokies were both fighting for a spot in the BCS Championship Game. (The 2004 game, in the first ACC season for both schools, was for the conference championship and a BCS bowl berth.) At a bare minimum, Virginia Tech will want to win this game to avenge an embarassing 30-6 loss in Blacksburg last season.

Why it matters: Georgia Tech was playing as well as any team in country at the end of the season, posting victories over Georgia and Mississippi State. With Justin Thomas and a veteran offensive line returning, the Jackets will be in the mix for the division title again this year, making this a “must-win” game if the Hokies want to return to the ACC Championship Game. 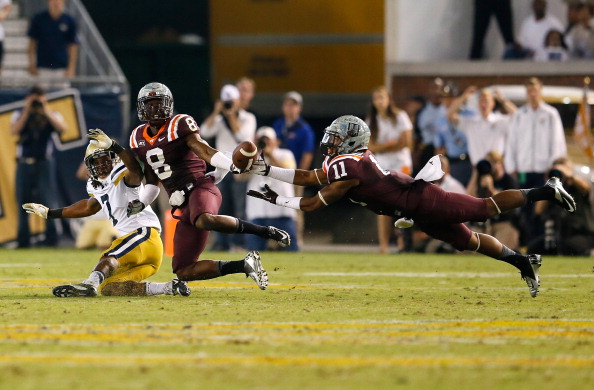 Kendall Fuller, CB – One of the top cover men in the country (17 passes defensed, 2 INT), Fuller earned first-team All-ACC honors last season. The Hokies will use him to take away the other team’s best receiver.

Dadi Lhomme Nicolas, DE – A second-team all-conference performer last year, Nicholas is the anchor of the Tech defensive line. He consistently made plays behind the line of scrimmage last season, finishing second in the conference in tackles for a loss (18) and third in sacks (8.5). He and Ken Ekanem form arguably the toughest pass rushing duo in the country.

Bucky Hodges, TE – Although listed as a backup on the depth chart, Hodges was an integral part of the Hokie offense last season, catching 45 passes for 526 yards and 7 TDs. With the size of a tight end and the speed of a receiver, he presents all sorts of matchup problems for opposing defensive coordinators. Look for offensive coordinator Scot Loeffler to get the ball into his hands early and often.

Sam Rogers, FB – He’s the most versatile player on the Virginia Tech offense. Throughout the course of an afternoon, Rogers will be asked to serve as a lead blocker, catch balls out of the backfield, and even line up at tailback to pick up the first down in an important short-yardage situation.

Ekanem is the Rodney Dangerfield of the ACC. He finished second in the league in sacks (10.5) and third in TFL (15.5), yet somehow did not receive even an honorable mention last season. Expect him to have another monster year, and earn a spot on this year’s all-conference team.

4. Virginia Tech will have the top defense in the league again.

As noted above, the Hokies welcome back eight starters from last year’s defense that finished in the top 10 nationally in sacks, tackles for a loss, third down conversions, and red zone efficiency. With Facyson and Mady at full strength, this season’s unit will be even better.

Let’s be honest: Foster should have won this award last year. After all, it was his defensive genius that handed Ohio State – led by eventual Broyles winner Tom Herman – its only loss last season.

Looking solely at the stat sheet, many of you are thinking, “Mr. Johnson you’re out of your mind.” After all, Virginia Tech allowed 34 sacks last season and could only muster a paltry 3.2 yards per carry in conference play. Considering that the Hokies lose 84 starts from that squad, it’s only logical to expect the unit to struggle again this fall.

While all of those things are true, this will be the year that Virginia Tech turns things around in the trenches. Offensive line coach Stacy Searels is one of the best in the business, helping build some stellar offensive lines at Appalachian State (1994-2000), LSU (2003-’06), and Georgia (2007-’10). There’s no reason to think he can’t do it again this year, especially with Jonathan McLaughlin and Wyatt Teller manning the left side.

Behind another dominant defense and a much improved offensive line, the Hokies will win 10 games and finish either first or second in the ACC Coastal Division.