1 Burning Question: Will Tennessee be able to climb back to the top of the SEC East?

If you started following college football over the last six or seven years, you probably are wondering what the big deal is with Tennessee football. Since 2008, the Volunteers have a cumulative record of 40-47 and have gone 17-39 in the SEC. Once upon a time, the Vols were one of the teams to beat, playing in five of the first 16 SEC Championship Games. In the third year under Butch Jones, can the Volunteers get back to the top (or even near the top) of the SEC East?

One reason to believe in the Vols is that they have the most returning starters in the SEC (tied with Vanderbilt) and return 10 starters on offense. Another reason to believe is the improvement they’ve shown under Jones. It hasn’t been a lightning quick payoff, but the Vols went from 1-7 in the SEC in 2012 to 2-6 in 2013 (their first year under Jones), and improved last season to 3-5. With a bevy of returning starters and accumulated depth, the Vols are a team to watch in the SEC in 2015.

43 — The number of sacks the Vols allowed in 2014. The average SEC offensive line gave up 23.7 sacks per game last year. Tennessee has more experience this year; the team has moved some players around and possesses more bodies to throw into the mix. If the Vols expect to contend this year, the offensive line has to be the most improved unit on their roster.

17 — The total number of plays the Tennessee offense had of 30 or more yards in 2015. This was good (or bad) enough for 13th in the SEC (only Vanderbilt was worse), and it ranked them 114th nationally. The offense has to be more explosive in 2015.

Why it matters: The Vols have lost 10 straight to the Gators and the last one was a heart-breaker. This is the Vols’ only road game in their first six and it’s their SEC opener. A win would make a statement and put the Vols on good ground heading into a tough stretch against Arkansas, Georgia and Alabama.

Why it matters: These are two teams on the rise in the SEC. Tennessee hasn’t beaten a lot of quality opponents in recent years, and if the Vols can beat the Hogs, it will be a quality feather to put in their hat (especially heading into the aforementioned Georgia and Alabama games).

Why it matters: Since Missouri has come into the league, Tennessee has yet to beat Gary Pinkel’s team. The Tigers have also been the SEC East representative in the SEC Championship Game the last two seasons. If the Vols want to make a move up the ladder, they have to win this game. 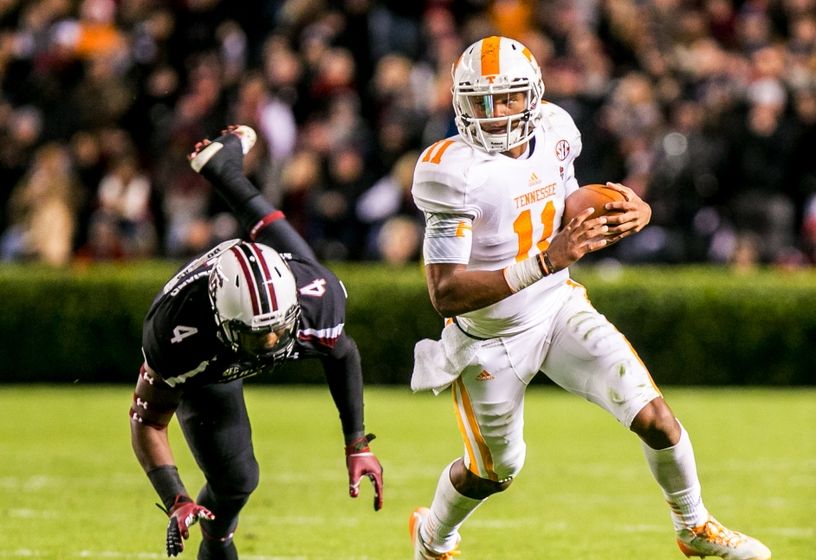 Joshua Dobbs, QB – Once he took over as a starter last year, Dobbs was impressive. However, let’s not forget that his wins came against South Carolina, Kentucky, Vanderbilt and Iowa. Not exactly a who’s who of 2014 college football. Dobbs has a lot to prove this season, but it seems that he has a very bright future.

Jalen Hurd, RB – Herd had a great freshman year, finishing with 899 yards rushing and 5 rushing TDs. With an improved offensive line and a new backfield teammate in Alvin Kamara, look for special things from Hurd this season.

Curt Maggitt, DE/LB – Maggitt led the Vols in sacks last season with 11 and had four multi-sack games. Some thought he would opt to turn pro after last year, but his return gives the Vols two bonafide pass rushers.

Marquez North, WR – With Tennessee needing to be more “explosive” on offense, eyes are on Marquez North after a disappointing 2014. North averaged just 10.6 yards per catch in 2014. The offensive line was an issue, but the Vols need North to stretch the field and become the player that his talent suggests he can be.

The Vols have had a player rush for 1,000 only once in the last four seasons. The offensive line will be better and Kamara will help the Vols keep Hurd fresh. After a great freshman campaign, Hurd will really blossom in 2015 and will exceed the 1,000-yard mark with room to spare.

This might not sound like a big deal, but it’s been ten years since the Vols have accomplished this feat. The Gators are reeling and the Vols are on an upward trend. Catching Florida early in the season is a benefit for Butch Jones and Tennessee as Florida, will still be working out the kinks.

3. Tennessee will have the most improved offense in the SEC.

The Vols ranked 11th in total offense in 2014. Dobbs is taking over as the starting QB. The Vols will have a strong tandem of runners in Hurd and Kamara. The WR corps is very talented. The OL will be improved. All that spells a much better offense, and the boys from Knoxville will make a bigger jump than anybody else in the SEC.

The last time the Vols won at least 9 games was 2007. The schedule lines up well for Tennessee, which has just four road games. The Vols also finish with a particularly light run of games compared to some of their competition in the SEC.

1. Tennessee will beat Alabama or Georgia.