Replacing talent is something that is annually necessary with each college program. However, it is not always the case that a team has to replace staples to the program with their quarterback and top pass catchers in the same season. What Tyler Lockett contributed to the program in his time with the Wildcats goes without question. While Jake Waters was not the most agile quarterback in the world, he did provide leadership. Along with being the team’s leading passer last season, he was also the second leading rusher.

Why buy Kansas State this year? It is impossible to go against Bill Snyder’s ability to cultivate talent and get the most out of his squad. In the past, when Snyder has needed to replace a large class, he has regularly looked to the quick bandaid provided by the JUCO route. While there are no JUCO options this year, Snyder has several players who have come in over the past couple years who will attempt to grow into roles with a year of experience under their belts.

2 — The number of 1,000-yard receivers the Wildcats have to replace. Between Lockett and running mate Curry Sexton, Kansas State had a pair of wideouts cross the 1,000-yard plateau for the first time in school history. Along with having to replace Lockett and Waters, Sexton also creates quite a void. Another absence that will need to be compensated for is created by departing tight end Zach Trujillo.

7 — The total number of Big 12 conference wins last season, as the only two teams to defeat the Wildcats were TCU and Baylor, the two teams that finished in the national top six (in the CFB Playoff standings). However, those losses were by 11 to Baylor and 21 to TCU. The other two losses last season were to Auburn by six and UCLA by five in the bowl game. While there are departures, the program certainly has set a pattern of winning, one the returning players can latch onto.

Why it matters: TCU is clearly still the class of the Big 12 with all of the skilled players that they return. While the Wildcats lose several starters, they still have to be encouraged that they have won the two games against the Horned Frogs coming into last season’s defeat. However, this time they have TCU at home and have them early enough in the season to create surprises.

Why it matters: Texas is still in the rebuild under Charlie Strong, but the Wildcats have owned the Longhorns in recent years. With the Texas program seeing things looking up, the key is keeping the momentum in the rivalry moving forward. Having this game in Austin creates some challenges, and the Longhorns will be well aware of that aforementioned dominance.

Why it matters: While the Wildcats have had success against TCU and Texas, Baylor has seen the opposite in the rivalry. The Bears have absolutely dominated Kansas State last season, and will be another challenge to crack this season and possibly a barometer for the success. Coming later in the season, Kansas State could be eyeing bowl eligibility at this point, making it even more pivotal. 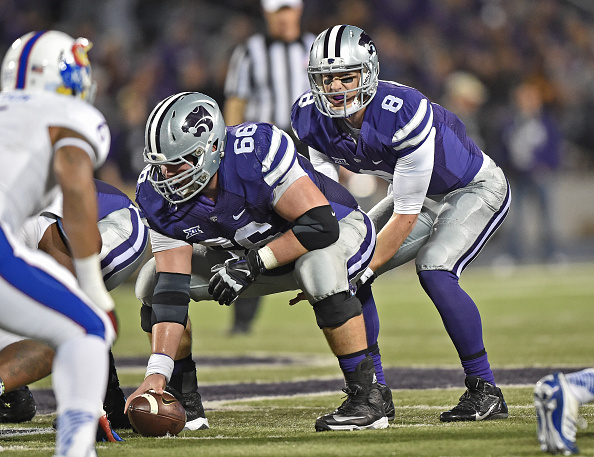 Joe Hubener, QB – With Waters leaving the program, Hubener appears to have a similar skill set, meaning that the Wildcats will not have to completely alter their game plans. In addition, Hubener saw some action in games last season. However, he has not started a single game at quarterback at any level. He played other positions in high school, so game action and experience will tell us a lot about Hubener’s development over the course of the season.

Charles Jones, RB – Jones returns as the team’s leading rusher, but he was able to muster only 540 yards on 133 carries last season. Behind Jones, the depth chart looks awfully thin, so he will need to have a huge year for the Wildcats to compete. Despite a down season in the rushing attack as a team, Jones still averaged over four yards per carry and scored 13 touchdowns. Another season of experience has to help his ability to carry the workload for this offense.

Cody Whitehair, OL – While the team was disappointing on the ground last year, Whitehair returns to solidify the line with experience at left tackle. Whitehair is a senior and a three-year letter winner who will certainly lead a unit that is bound to improve. He was a honorable mention for All-Big 12 as a freshman and made the Second Team All-Big 12 the past two seasons.

Dante Bennett, S – Having lost a number of players on the front seven, the experience on the defensive side of the ball comes on the back end. Bennett is the leader of this unit, as he has started 28 games in the program. Along with Bennett, Kansas State returns senior corners Danzel McDaniel and Morgan Burns. While trying to work in new starters on the front seven, an experienced secondary will be essential in the process of solidifying the unit.

5. Quarterback play will not witness a drastic drop-off by the end of the season.

Though Hubener will need some time to develop as a quarterback, he will also have some time to ease into the role, with three non-conference games. However, the path gets much tougher after that, as the Wildcats battle an improved Oklahoma State team, TCU, Oklahoma, Texas, and Baylor in the following five weeks. The team’s level of success in those games will determine how the season is defined for Kansas State.

4. The Kansas State defense will also not lose a beat.

Despite losing several players in the front seven, Kansas State did not finish any worse than 41st last season in total defense. With the experience in the secondary, and the Big 12 being a pass-dominated conference, the Wildcats will be fully prepared for the gauntlet. Last season, the squad allowed more touchdowns than it scored, and gave up nearly 370 yards per game. Look for those numbers to improve this season.

3. The rushing offense will improve.

Last season, the Wildcats finished 101st in the nation with their rushing attack. Returning both portions of the left side of their offensive line, the group can do nothing but improve up front. Along with improved offensive line play, Hubener actually has more athleticism than Waters in some aspects of competition, which will actually improve the rushing attack. Plus, Jones has another year under his belt and actually had a solid average last season.

2. Kansas State will finish in the top half of the Big 12.

While this will not match the success of last season, finishing in the top half of the Big 12 will be a huge victory for the program with the amount of talent that was lost. The Wildcats are likely to fall behind Baylor and TCU for certain. A repeat performance as the next team in the standings will be difficult to achieve, but it would be hard to see the Wildcats falling out of the top six in the conference.

Even though they may lose at least four out or five games during that tough stretch of the season to kick off conference play, the Wildcats have a cake walk down the stretch in the conference schedule. This includes Texas Tech, Iowa State, Kansas, and West Virginia to wrap up the season. This will allow the Wildcats to come together as a squad and have some momentum going into the bowl game, which is why they will win it.