1 Burning Question: Does Minnesota realistically have the best chance to win the Big Ten West?

Minnesota has improved in record (either overall, in conference, or both) every year since Jerry Kill was hired. However, Minnesota has been sort of stuck in this nexus of 8 wins max for seemingly most of our adult lives. The glass ceiling has been there, and every now and then the program bumps its head and falls down a few notches. Yet, it’s hard to ignore the progression Kill and staff have made, especially in spite of all the health problems Kill has fought through.

Why buy Minnesota this year? For one, quarterback Mitch Leidner returns, and the Gophers honestly might have the most stable quarterback situation in the division. On top of that, they get the good fortune of missing Michigan State on the schedule against cross-divisional opponents. They also will get Wisconsin, the consistent top dog in the West, at home the last week of the season in what could be a winner-take-all situation. You take for granted that they’ll be fine running the ball no matter who is getting the carries because the Gophers have earned that right, and returning four seniors in the secondary should make this the best defense they’ve had in quite some time. You could easily make a convincing argument this team gets it done this year.

314 — The number of carries David Cobb had last season that must be replaced. The next closest running back was nearly 300 carries behind Cobb, so senior Roderick Williams has that to look at as he and others try to do their best to keep the Minnesota running game humming. One assumes the Gophers’ rushing attack will continue to be their foremost strength on offense.

30 — The total number of turnovers gained by the Gophers in 2014, good for 11th best nationally. All of that is very surprising considering they didn’t have a great pass rush (ninth in the conference in sacks per game with 2.08). However, returning two All-Big Ten cornerbacks helps, and if the pass rush is even mildly better as it should be, their defense could be a real pain in the backside for foes.

Why it matters: The division crown will very possibly come down to this legendary rivalry game, but it hasn’t been much of a rivalry lately other than in name. Minnesota has bested the Badgers only twice since 1995 and not once since 2003.

Why it matters: Unless Purdue or Northwestern are surprisingly more stout than expected, the trip to Iowa City should be the Gophers’ most difficult inter-division road game. They provided the low point for Iowa last year, pasting them by 37 points, so the Hawks will be looking for their pound of flesh. The Gophers haven’t won in Kinnick Stadium since 1999.

Why it matters: While it doesn’t mean anything in the Big Ten race, TCU is a widely viewed national playoff favorite. A win could put Minnesota on the national scene; if achieved, a victory over the Horned Frogs would become the biggest gridiron achievement for Minnesota in recent memory. Either way, how the Gophers handle that game — no matter what happens — will set the table for the remainder of the season going forward. First games are so important. 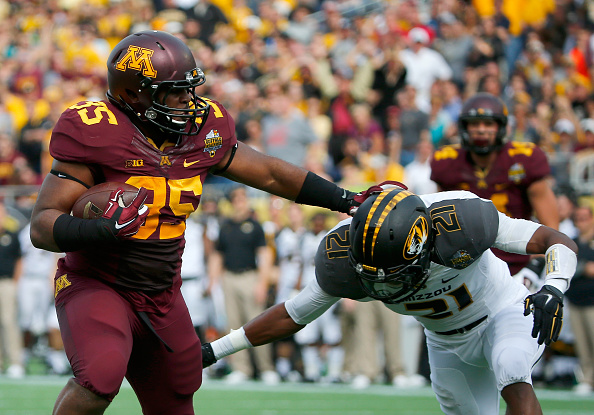 Rodrick Williams, RB – While Williams didn’t break 30 carries last year, he’s going to need to get as much of his David Cobb on as he can, because Minnesota without question wants to run it, run it again, and then run it more. Like with any person inexperienced in handling a certain workload, it could go a lot of ways.

Mitch Leidner, QB – Leidner’s stats don’t jump off the page at you, 11 touchdowns and 8 interceptions later, but he’s got to start completing more than 52 percent of his passes (as he did last year) if Minnesota is going to take the next step. This is true even though his ground game is a huge asset, having logged 126 carries last year for 3.1 yards per carry.

Eric Murray, DB – Betwixt Murray and Briean Boddy-Calhoun, you could make the case the Gophers have the best pair of starting corners in the nation going into 2015. Murray’s stats don’t pop off the printed page, but neither do guys like Darrelle Revis in the pros … and that’s because quarterbacks spend a lot of effort avoiding them.

K.J. Maye, WR – If this team has a major unknown, it’s in the receiving game, where Maxx Williams has departed, having accumulated twice as many catches in 2014 as the next closest player. Maye is a senior and the leading returning receiver in terms of yards, but he hauled in only 16 catches last year. Minnesota will have to throw the ball at some point — the team needs an unheralded receiver without a lot of catches to step up and catch a bunch of passes this fall.

Leidner takes his fair share of grief for being exceedingly mediocre throwing the football, but the redshirt junior should have the experience and confidence to make a drastic improvement, and any improvement in the consistency of the passing game would be a huge boon for the Gophers. Kill wants to run, run, run, but understands the pass will be counted on more this year as well. It will be better.

4. The Gophers will finish in the season in the top 25.

It’s been a long time coming for the Gophers, who are set up to potentially have their best season since 2003 under Glen Mason, when they won eight games. With a home-friendly schedule and a defense that at the very worst will keep them in every game no matter what happens on offense, it’s time for Minnesota to hang a rank next to their game at season’s end.

3. Minnesota will win a bowl game for the first time since 2004.

That year, the Gophers defeated Alabama in the Music City Bowl. Both the bowl and the opponent will be better this time, and Kill and the boys will get the job done.

2. Buoyed by a veteran secondary, Minnesota will field the best scoring defense in the Big Ten.

The pass rush needs to be better at getting to the quarterback on the front end before he passes the ball, but there were positive vibes on an improved front seven coming out of spring. Defensive lineman Theiren Cockran will become a standout player as a result of that process of improvement.

That would be the most since that 2003 season, which was the most since forever. This is an exciting time to be a Golden Gophers football fan, and the level of their success is something the fan base has been waiting on ever since Jerry Kill was hired.