1 Burning Question: Will the Rockets win the MAC Championship?

From 1997-2004, Toledo was the best program in the Mid-American Conference. During this highly successful stretch, the Rockets captured two league championships (2001, 2004) and won their division five times.

The past ten years have been a completely different story. Sure, UT has had some great seasons during that span, capturing a share of the West Division title in 2005, 2011, and 2014. However, the fact remains that the Rockets haven’t played for the MAC championship in the last decade.

Is this the year that Toledo makes it back to Ford Field and hoists the championship trophy?

There are plenty of reasons to think so. The Rockets have two proven signal callers in Phillip Ely and Logan Woodside, who each showed flashes of brilliance last season when healthy. They also welcome back 1,600-yard rusher Kareem Hunt, and the dangerous receiving duo of Corey Hunt (68 catches, 842 yards) and Alonzo Russell (165 career catches, 2,451 yards). This abundance of talent at the skill positions will force opposing defenses to respect every facet of the Toledo offense.

On the other side of the ball, the Rockets will be equally solid. Trent Voss (15 TFL), Treyvon Hester (9.5 TFL), and Orion James (6 sacks) are all back this fall to anchor a front seven that ranked 14th nationally in rushing defense last season. The secondary – which limited opponents to an average of 160 yards passing over the final four regular season games – will be significantly better this fall with 2013 starters Cheatham Norrils and Cameron Cole returning from injuries, and UAB transfer Rolan Milligan joining the group.

The schedule also sets up nicely, as the Rockets play their two toughest divisional foes inside the friendly confines of Glass Bowl Stadium.

3 — The number of All-MAC first and second team performers Toledo must replace on the offensive line this fall. It’s also the number of career starts that Rocket O-line has, meaning that some new players are going to have to make an impact in a hurry.

50.82 — This is the percentage of third down conversions the UT defense allowed in its four losses last season. If the Rockets are going to play for the MAC title, this number must improve. However, it is worth noting that the Rocket D limited opponents to just 27.7% (20 out of 72) in the final five games of the 2014 campaign.

Why it matters: While coaches say that every game is important, there’s nothing sweeter than defeating an archrival in its own backyard. This Rocket squad – especially the seniors – does not want to be the group that allowed BG to snap a five-game losing streak.

Why it matters: The Broncos return nine starters from an offense that finished second in the league in yards per play last year (6.51). This type of explosiveness will have WMU in contention for the division title, potentially turning this matchup in a de facto West Division championship game.

Why it matters: The Huskies have won five consecutive division titles and will be heavily favored to win the West again this year, thanks to a veteran D that welcomes back eight starters from a unit that finished fourth in the MAC in total defense. If Toledo is going to return to Detroit, it must win this game. 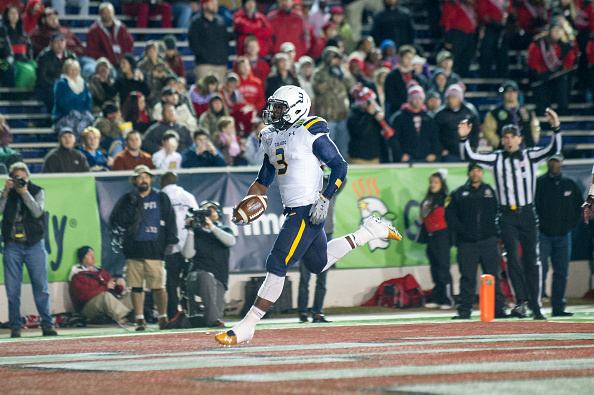 Kareem Hunt, RB – Hunt was the the most pleasant surprise in college football last year. In 10 games, he ran for 1,631 yards with an amazing 7.96 yards per carry. More impressively, he ran for at least 110 yards and averaged no fewer than 5 ypc in every game last season. He should be the focal point of the Toledo offense this fall.

Trent Voss, LEO – A legitimate candidate for MAC Defensive Player of the Year this season, there’s very little that Voss can’t do. Last fall, he led the team in tackles for a loss (15), finished second in sacks (4.5), and was third in tackles with 77. He also broke up two passes, intercepted a pass, and blocked a punt. Opposing offenses will need to pinpoint where he is before every snap.

Treyvon Hester, NT – The anchor of the Rocket front seven – which led the MAC in run defense – Hester earned second-team all-conference honors last season. He’s a disruptive force against the run, recording 49 tackles, with 9.5 of them coming behind the line of scrimmage.

Alonzo Russell, WR – While Corey Jones led the team in catches, Russell averaged 15.1 yards per reception and led the team with 8 TDs. His ability to stretch the field will prevent opposing defenses from loading the box in an effort to stop the Rockets’ vaunted ground game.

5. Kareem Hunt will be a finalist for the Doak Walker Award

Let’s be honest: Hunt should have been a finalist last season, rushing for more yards per game (163.1) than everyone except for Melvin Gordon and Tevin Coleman. He also fared well against top competition, recording 148 yards against Missouri, which finished 24th nationally in run defense. He will put up big numbers again this season because….

4. The offensive line will be every bit as good as it was last year.

As noted earlier in this preview, the Rockets must replace three all-conference players on the offensive line, returning a total of three starts. While this would have a devastating impact on most teams, history suggests that UT won’t suffer much of a drop-off. Remember, in offensive line coach Tom Manning’s first season at Toledo, the team had to replace three starters on the line. Despite this inexperience, the Rockets averaged 445 yards per game, sparking the team to a 9-4 record. Given Manning’s successful track record with Toledo and Mount Union, there’s no reason to think that the offensive line won’t be as productive as it’s always been.

Playing on the road without Kareem Hunt, the Rockets led the Cyclones 13-9 at halftime last year. Unfortunately, ISU quarterback Sam Richardson caught fire in the second half, throwing for 353 and 3 TDs to grab a two-score lead in the fourth quarter before Toledo scored in the closing minute of the game. While Richardson returns, UT will win this game in the Glass Bowl because….

2. The Rocket secondary will be the most improved in the MAC.

By the end of the 2014 campaign, the Toledo secondary was playing as well as anyone. In the final four games of the regular season, opposing offenses completed only 43% of their passes and failed to reach 200 yards passing – an impressive feat considering that one of those contests was against Bowling Green, which finished second in the league in passing. Adding Norrils (13 starts in 2013), Cole (8 starts in 2013), and Milligan (4 starts at UAB) to the mix will only make this unit that much stronger. Don’t be surprised if the secondary is the best in the MAC.

Thanks to an explosive offense, an improved secondary, and a favorable schedule, the Rockets will make it back to Ford Field and win their first conference championship since 2004.