The start of the 2015 college football season is less than two months away and just about every head coach has his concerns. For a number, the upcoming season is one they could spend on the hot seat while for others, it’s a matter of living up to expectations. For these five head coaches, their legacies have already been set either at their current school or somewhere else, but that doesn’t mean they couldn’t desperately use a bounce-back year:

One would be hard-pressed to find a coach who exemplified a program more over the last half century than Frank Beamer at Virginia Tech, but the last few seasons in Blacksburg have been a little rocky.

Upon entering the ACC in 2004, the Hokies became the darling of the conference by winning the league in four of their first seven seasons after expansion. Since shutting out Virginia to close the 2011 regular season however, Virginia Tech is just 22-19 overall. In both 2012 and 2014, the Hokies had to pull out late victories over Virginia just to become bowl-eligible and managed to avoid losing seasons by winning bowl games over teams from what used to be called the Big East.

The good news for Beamer is that Virginia Tech should have one of the best defenses in the ACC. The veteran group is led by cornerback Kendall Fuller, but the defensive line of Luther Maddy, Corey Marshall and Ken Ekanem may be one of the best in the nation. The Hokies will still need to find a way to improve an offense that ranked just 99th in yards-per-game a season ago. 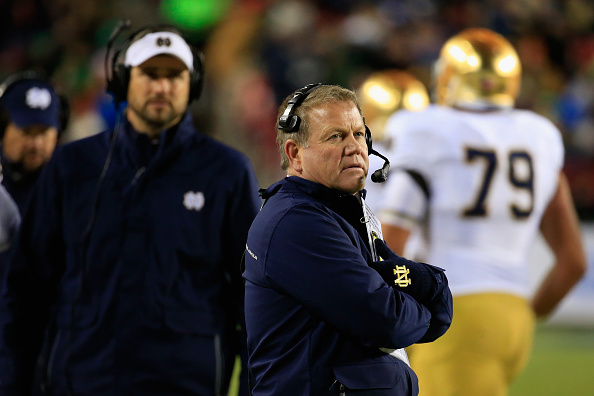 LANDOVER, MD – NOVEMBER 01: Head coach Brian Kelly of the Notre Dame Fighting Irish looks on from the sidelines during the first half against the Navy Midshipmen at FedExField on November 1, 2014 in Landover, Maryland. (Photo by Rob Carr/Getty Images)

Since reaching the BCS title game in 2012, the Fighting Irish have underwhelmed, following up a 9-4 season in 2013 with an 8-5 campaign. Notre Dame looked to be a player on the national scale early last season before a controversial loss to reigning national champion Florida State sent the Fighting Irish into a downward spiral that resulted in five losses in their final seven regular season games.

With quarterback Everett Golson transferring to the Seminoles, head coach Brian Kelly is putting his faith in Malik Zaire, who was incredibly efficient in Notre Dame’s 31-28 victory over LSU in the Music City Bowl. Zaire will have a nice compliment of weapons around him with running back Tarean Folston and a pair of talented receivers in William Fuller and Corey Robinson.

Notre Dame will have to visit Clemson, but the Irish will get Texas, Georgia Tech and USC at home. When Kelly came to South Bend, fans expected Notre Dame to be playing for championships. Kelly needs for that to be at least close to a reality this season.

After going a combined 33-7 from 2011-13, Les Miles’ LSU Tigers took a big step back in 2014, finishing just 8-5. LSU struggled down the stretch of the year, dropping three of its final four games including heartbreakers to Alabama and Notre Dame.

Talent however, won’t be an issue in 2015. On offense, the Tigers have a battering ram in 230-pound Leonard Fournette, but quarterback play was a real problem last season as the Tigers ranked 116th in passing and completed just 50 percent of their throws as a team. The defense should again be very good with Jalen Mills and Tre’Davious White leading a talented secondary.

Despite bringing a national championship to Baton Rogue in 2007, Miles has been on the hot seat before. Coaching in a division that has had a team in either the BCS title game or College Football Playoff in each of the last six seasons means margin for error is small and fans will again expect big things out of LSU this season. 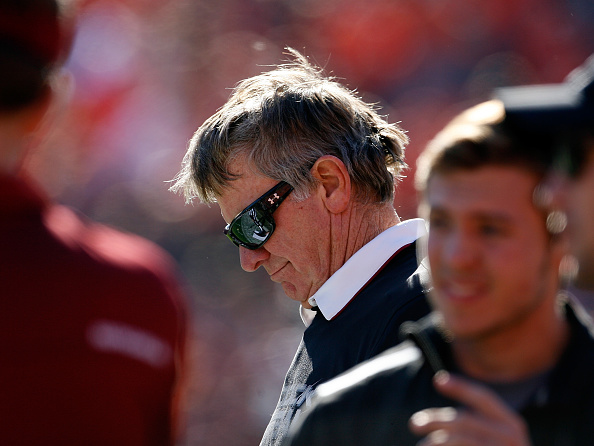 CLEMSON, SC – NOVEMBER 29: Head Coach Steve Spurrier of the South Carolina Gamecocks reacts after a play during their game against the Clemson Tigers at Memorial Stadium on November 29, 2014 in Clemson, South Carolina. (Photo by Tyler Smith/Getty Images)

After consecutive 11-win seasons in 2012 and 2013, South Carolina finished just 7-6 in 2014 despite a No. 9 national ranking to open the season. Steve Spurrier’s Gamecocks were able to edge Miami in the Independence Bowl to complete a winning season, but the road in 2015 isn’t an easy one.

The ol’ ball coach will be replacing a veteran quarterback in Dylan Thompson and a solid tailback in Mike Davis. Wide receiver Pharoh Cooper is expected to highlight the South Carolina offense. On defense last season, South Carolina yielded more than 30 points-per-game and that’s an area it could struggle again this season.

South Carolina hasn’t had a losing season since Spurrier took over in 2005, but with a non-conference slate that features North Carolina, UCF and Clemson, a winning season will not be a given in 2015. If the Gamecocks again struggle, the 70-year-old Spurrier may finally be forced to consider retirement.

Throughout the country last season, there may have been no bigger disappointment than Oklahoma. The Sooners were seen as a national title contender after knocking off Alabama in the Sugar Bowl to close the 2013 season, but those hopes were dashed by mid-October.

Entering his 17th season at Oklahoma, Bob Stoops has never lost more than three games in back-to-back years. The Sooners finished just 8-5 last season with drubbings at the hands of Baylor and Clemson. Oklahoma also let a 14-point lead slip away late in a 38-35 overtime loss to in-state rival Oklahoma State, who was largely depleted by injury.

The Sooners will get quarterback Trevor Knight back from a late-season injury, but the Oklahoma defense was downright dreadful over the final month of the 2014 campaign. That unit should be improved with a talented corps of linebackers and Zack Sanchez in the secondary. From 2000-08, the Sooners played for a national championship four times. The program hasn’t won as much as an outright Big XII crown since 2010.