Yes, the Big 12’s latest consideration of expansion might be the result of political pressure applied by David Boren and the University of Oklahoma.

TSS columnist Allen Kenney touched on this and other tension points in a helpful Big 12 primer, so no one’s pretending that school politics — coupled with the erosion of Texas’s power base — aren’t driving this issue in an immediate sense.

However, why are school politics (chiefly with OU banging the table and Texas losing ground) as paramount as they are? The underlying source of the turmoil enveloping this conference is worry that the Big 12 will miss the College Football Playoff.

Psychologically, this level of concern is understandable after the 2014 wrong turn with Baylor and TCU versus Ohio State. As a solution to a problem, however, insisting on a 12-team league and a conference championship game doesn’t meaningfully affect the playoff calculus. If this is what Bob Bowlsby and other Big 12 leaders honestly think, they’re overthinking the matter.

What this suggests is that the Big 12 is more focused on getting rid of The Longhorn Network while valuing the revenue a conference championship game can generate. Nevertheless, if playoff odds really are the focus, that shibboleth needs to be knocked down. 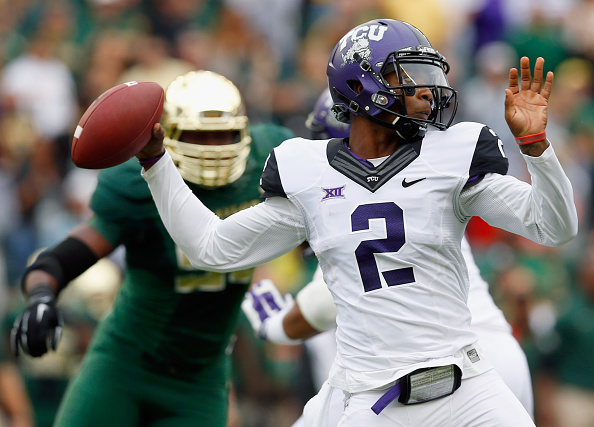 WACO, TX – OCTOBER 11: Trevone Boykin #2 of the TCU Horned Frogs looks for an open receiver in the first half against the Baylor Bears at McLane Stadium on October 11, 2014 in Waco, Texas. (Photo by Tom Pennington/Getty Images)

The 2014 snub of both Baylor and TCU was the product of many forces, one of them being the Big 12’s refusal to be clear about its champion. The messy handling of the race between the Bears and Horned Frogs created a vacuum which was filled by Ohio State. The fact that the Buckeyes crushed a Wisconsin team whose coach (Gary Andersen) was just about out the door represented the kind of plot twist which made it that much easier for voters to select Ohio State.

The Big 12 was a victim of its lack of political finesse in 2014, but also on-field events. Very little about the 2014 season’s denouement was conventional… which in many ways makes the entire argument about why the Big 12 doesn’t need to expand and restart the conference title game it abandoned after the 2010 season. 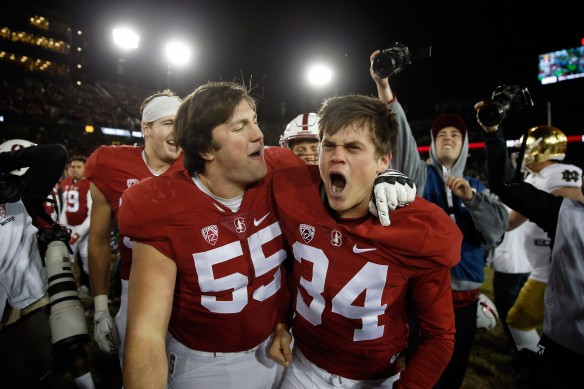 at Stanford Stadium on November 28, 2015 in Palo Alto, California.

Stanford’s last-second win over Notre Dame (above) ensured that Oklahoma would make the playoff with a win over Oklahoma State in its season finale. The Cardinal’s victory over the Irish was the product of Notre Dame being unwilling to drain 15 extra seconds of clock. It was also the result of a penalty by Notre Dame on Stanford’s final drive. Several different events had to come together to create that outcome.

Nearly every college football season is a violent rollercoaster ride, in which accumulations of highly improbable events keep a championship chase in limbo until the very end.

Consider all the bounces of the odd-shaped ball which affected the 2015 playoff race:

* The Arkansas miracle against Ole Miss, “Woo Pig Lateral,” which would up enabling Alabama to win its division, its conference, a playoff berth, and the national title;

* A Kevin Hogan fumble deep in Oregon territory, causing Stanford to lose at home to Oregon;

You get the point, or at least, you should. Some of these events — as they played out — cut against the Big 12’s best interests, while others promoted the league’s playoff chances. The larger realization should be that most seasons are precarious by nature, and one out of five will be left out. It’s a point of near certainty that not all four — or even three — playoff teams will be unbeaten. Therefore, the essential key to securing playoff inclusion (or rather, being the one Power 5 league which avoids exclusion) is to make your resume robust enough to withstand one loss.

No one doubts that a 12-0 Big 12 champion (like any unbeaten Power 5 conference champion) will be in excellent shape for the playoff. The question is whether an 11-1 champion gets in, and in 2015, Oklahoma made the cut. The Sooners played decent teams out of conference, enough to absorb a bad loss to Texas. It is plain that if Power 5 teams avoid the cupcake route in non-conference games, a one-loss record will put them right on the cut line. A high-end non-conference win will almost certainly punch a semifinal ticket.

These are not eye-opening statements or revolutionary ideas. That’s precisely the point, too: Such realities exist independent of a conference championship game or not.

Yes, the Big 12 doesn’t command the stage on the first Saturday of December, but who’d stop the league from playing a full schedule that day, or perhaps from playing Thursday and Friday primetime games that week?

Again, the league might covet money more than playoff odds in all this, but if playoff odds truly are the focus, the idea that 12 teams and a title game are essential to improving the league’s situation is an idea which rings hollow. It is utterly unconvincing.

Making the playoff will require a lucky bounce at some point (most likely). It requires a respectable non-conference schedule. It requires a league which is substantially deep.

It does not require a conference title game. As the aforementioned Allen Kenney and other Big 12 historians would be quick to tell you, the Big 12 Championship Game — in its first iteration — actually eliminated a Bowl Alliance or Bowl Championship Series contender on several occasions. The inaugural game knocked out Nebraska in 1996. Kansas State (1998), Texas (2001) and Missouri (2007) also felt this special kind of pain. Oklahoma (2003) should have been knocked out but was kept in the BCS title game against LSU in the 2004 Sugar Bowl.

The Big 12 shouldn’t overthink the College Football Playoff… if it really is worried about its playoff chances in the near future. If it’s focused on making extra money… carry on, then, and resume playing a conference title game.

Let’s just be honest about what we’re discussing… and what we’re claiming to value or fear in this larger theater of politics.