Christian Hackenberg could have gone to Alabama and become the face of a budding dynasty with the nation’s top offensive line protecting him and a Heisman Trophy-caliber running back in the backfield with him. The pro-style passer, a five-star recruit on 247 Sports’ composite ranking system and an Under Armour All-American, would have been a star in Tuscaloosa, likely succeeding A.J. McCarron under center for Nick Saban and the Crimson Tide. He could have gone down in history as one of the top quarterbacks in Alabama history, and perhaps even drawn comparisons to some of the top passers in SEC history like Peyton Manning.

Instead of chasing a national championship (or two?) at Alabama, Hackenberg chose to go to Penn State at a time when the program was essentially left for dead. Hackenberg remained loyal to the head coach that recruited him to a program many turned away from and he stayed loyal to the school during a coaching change when nobody would have blamed him if he left. Last Saturday, after being knocked out of a bowl game, Hackenberg announced the least surprising news of the season by declaring for the 2016 NFL Draft. The reviews of the legacy of Hackenberg may now be written, evaluated and discussed, although it may take some time for some to see just how much Hackenberg truly meant to the Penn State program.

Hackenberg was a star recruit in Penn State’s Class of 2013. The first true recruiting class put together by Bill O’Brien at Penn State could have easily imploded well before signing day in the summer of 2012. It is impossible to weigh the impact Hackenberg had at Penn State without first reviewing the landscape of the Penn State football program before his arrival, so excuse me while I first rehash a story you are probably all too familiar with by now.

The NCAA dropped a 14-ton anvil on the program in June 2012 in response to the release of the Freeh Report, which analyzed the university’s handling of the disturbing and sickening actions of former defensive coordinator Jerry Sandusky by university officials, including former president Graham Spanier, athletics director Tim Curley and Joe Paterno. The NCAA sanctioned Penn State with a four-year postseason ban, a significant reduction in available scholarships for football, the vacating of over 100 wins from the record books and a hefty $60 million fine.

Players already a part of the program were given a free opportunity to transfer to another program if they desired, and some did. Running back Silas Redd left for USC. Wide receiver Justin Brown took off for Oklahoma. Quarterback Rob Bolden landed at LSU. Another quarterback, Paul Jones, would later leave the program for Robert Morris. A handful of others also left, including kicker Anthony Fera to Texas.

The sanctions quickly took a toll on current recruiting targets, with some immediately dropping Penn State from their recruiting plans. These were problems new head coach Bill O’Brien were not prepared for, but he kept the team and program grounded and determined. O’Brien could do little to sway some minds of players looking to leave, which put much emphasis on his first recruiting class under a full recruiting cycle.

Penn State’s Class of 2013 had a handful of key players lined up well in advance of signing day. Tight end Adam Breneman, a Pennsylvania native and the top tight end in the country according to many, was one of them. Quarterback Christian Hackenberg was another. These two were seen by many to be the foundation of a solid offense under O’Brien, perhaps being a mini-version of a Tom Brady-Rob Gronkowski combination in State College. O’Brien had just come from being the offensive coordinator with the New England Patriots, so it was not a shock to see him target the best quarterback and tight end combo he could land.

When the sanctions hit, the big recruiting question left to answer is what would Breneman and Hackenberg do? At the time, it was possible both could play the bulk of their college careers without ever playing in a bowl game. Even if they had redshirted, many suspected Penn State would still be in a massive rebuilding mode by the time the postseason ban had expired, and Penn State might not even qualify for a postseason game by their respective redshirt senior seasons (little did we know about 5-7 bowl teams at the time). Nobody would have blamed Breneman or Hackenberg and any other player in Penn State’s Class of 2013 (wide receiver DaeSean Hamilton, defensive end Garrett Sickels etc.) if they chose to go elsewhere for the chance to go to a different program and maybe play in a bowl game.

The day the NCAA hammered Penn State, the committed players already at Penn State walked out together and stood behind seniors Michael Zordich and Michael Mauti as the two made a public statement in response to the sanctions. Before that day came, Hackenberg made his own statements to affirm his standing with Penn State.

“I’m not going to say we want to move on,” Hackenberg said in an interview with ESPN in 2012, “because what happened was horrible, and it shouldn’t be forgotten. But this can give everyone something else to look at. We’re the first class that the new staff has recruited. We’re going to be leaders.”

Hackenberg had not yet played a down or spent one practice session at Penn State, but he was already showing signs of being the kind of leader the program needed. He and Breneman remained committed to the program through the darkest hours even after taking some time to reconsider all of the options they could explore.

“At the end of the day,” Hackenberg said, “if there’s football at Penn State, I’m going to be there.” 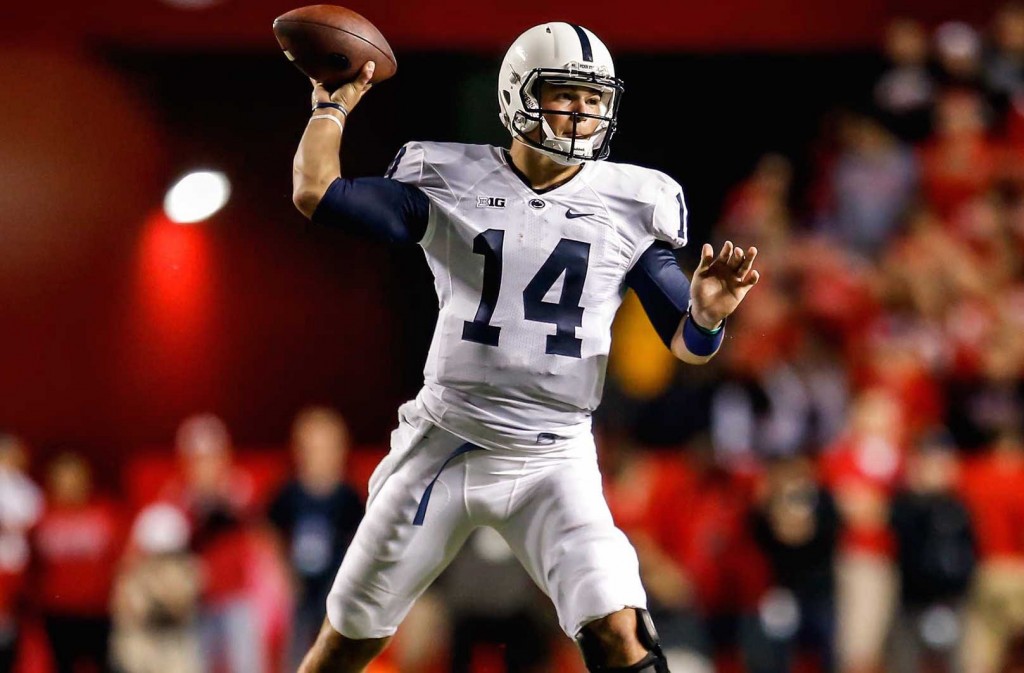 Hackenberg arrived on Penn State’s campus in 2013 and started Penn State’s season opener on an NFL field, MetLife Stadium, against Syracuse. Despite completing his first three pass attempts on his first drive as Penn State’s starting quarterback, just the third true freshman in school history to do so, Hackenberg’s first career offensive drive ended with Hackenberg punting the football, which just snuck into the end zone. Hackenberg split some playing time with junior college transfer Tyler Ferguson, but there was no doubt Hackenberg was going to be O’Brien’s guy. Hackenberg ended his first game with 278 passing yards and two touchdowns, including a 51-yard pass to Allen Robinson and a 54-yard pass to Geno Lewis. He was picked off twice, but Hackenberg offered a mighty glimmer of hope for Penn State right out of the gate.

Hackenberg would go on to have a very successful freshman season at Penn State, but after the season he lost his head coach to the NFL’s Houston Texans. James Franklin came home to take the job as head coach and continued to offer bright beams of sunshine and optimism for the direction of the program, but would Hackenberg fit Franklin’s style? Once again, few would have blamed Hackenberg for leaving Penn State to pursue other opportunities that would have him best suited to succeed, and once again Alabama could have been a very solid landing spot with a quarterback competition opening up. He stayed, and took a beating for it.

Over the past two seasons, Hackenberg has been sacked more often than any player should. The loss of scholarships from the NCAA sanctions took a hefty toll on the offensive line’s stability, and it remains a bit of a work in progress because of it despite having scholarships restored and sanctions eventually lifted. Even with that being the case, Hackenberg always got back up and went back out to take another likely hit. For 25 straight games, Hackenberg took hit after hit and never missed any significant amount of time. He got upset at times, and understandably so, but he continued to trot back on the field through many down moments. He got sacked. He got hit late. His team was down big at times, but Hackenberg always stepped foot back on the field. He remained committed despite the risk he took for his health and possible NFL Draft future. Why? Because at the end of the day, if there’s football Penn state, he was going to be there.

In the first half of Penn State’s TaxSlayer Bowl against Georgia, Hackenberg’s body finally had enough of being roughed up. Hackenberg was knocked out of the first half of the bowl game and taken for X-rays, which came back negative and led to a diagnosis of a sprained right shoulder. He returned to the sideline in street clothes in the second half, likely already knowing he would next step foot on an NFL field in the future. He could have sat back and relaxed and enjoyed some down time on the sideline with his Nittany Lions digging a 24-3 hole. Instead, Hackenberg got a headset and did whatever he could to help with communication for his backup, Trace McSorley. McSorley nearly led Penn State to a tie in the closing seconds after throwing two touchdowns in the second half, but the last-second Hail Mary fell shy of the end zone and the game was over. So to was Hackenberg’s career at Penn State.

Hackenberg’s struggles have led to a polarizing conversation with regard to his status in Penn State history. He came to the program as the most talented quarterback in the program since, perhaps, Kerry Collins. His dynamic freshman season set the bar incredibly high, but two years under Franklin have left that bar unreachable.

At times, the woeful offensive playcalling was to blame. Other times it was the shaky offensive line not allowing Hackenberg any time to work. And yes, at times Hackenberg was clearly to blame for some poor decisions. One potential reason for at least a fraction of those poor decisions could be the urge to try and make a play happen just for the sake of moving the offense, knowing the offensive line and running game was not going to do anything. For this, it may take some time for some to realize just how vital Hackenberg was for the Penn State program.

Had Hackenberg gone to Alabama, the story would have been much different. Hackenberg would not have taken the same beating, and he would have won a lot more. Yet, he chose to leave his mark at Penn State. It may be a black and blue mark, but it is one that will be appreciated much more in the years to come once the hot take society moves on.