It became a favorite joke of bloggers on #CollegeFootballTwitter a few years ago.

The University of Miami announced a crowd of 40,000 for a game in Sun Life Stadium, when no more than 20 to 25 thousand fans could have been in the joint. Announced crowds often exaggerate the actual walk-up crowd to a considerable extent. Tickets sold often represent the announced number; bodies in the seats often fall far short of that figure. Anyone paying attention laughs — or cringes, or both — at the transparent attempt to make a disappointing crowd seem respectable.

This little detail is mentioned to create a segue to the theme of this piece: the enduring legitimacy and commercial success of the Sun Bowl football game.

If some events need to exaggerate in order to maintain the (very tenuous) appearance of prosperity, the Sun Bowl is the real thing. The fact that the Sun Bowl continues to succeed is one of the best things about bowl season. That’s what we’re going to explore here.

Announced crowds for the Sun Bowl over time have consistently hovered in the area of 47 to 50 thousand, occasionally a little more and (not as often) a little less. Are these exaggerated crowds? A simple and not that exhaustive YouTube search indicates that this game continues to deliver strong crowds to El Paso’s simple stadium, tucked into the desert landscape of this charming corner of the country. Removed from the bright lights, the big city, and the spectacle of New Year’s Day bowls, the Sun Bowl (originally a January 1 bowl when it began in 1936) has filled at least 85 percent of its seats almost every year since the Sun Bowl stadium expanded to over 51,000 seats in 1982.

Not convinced about the Sun Bowl’s drawing power? Just skip through videos of CBS broadcasts of the event. You will eventually see crowd shots well into the game with nearly packed stadiums, including the north end zone.

Here’s the 2008 game between Oregon State and Pittsburgh (don’t watch the game, just make sure the crowd is a substantial one).

Here’s the 2003 game between Oregon and Minnesota.

Try the 1997 game between Iowa and Arizona State.

Here’s the 1992 game between Arizona and Baylor.

This is a shortened version of the 1988 game (an earlier kickoff) between Alabama and Army.

The regional representation in this event over time is significant. The above games are just a sampling of what’s transpired since the expansion of the Sun Bowl stadium in 1982. Yet, they include a service academy, an SEC team, a Big 12 (formerly Southwest Conference) team, and then the familiar tie-ins with Big Ten and (currently) Pac-12 and ACC teams.

Through the past third of a century; with shifting tie-ins, some of them from disparate corners of the country; in what could reasonably be called an out-of-the-way location, the Sun Bowl has packed in fans while maintaining a network television slot on CBS. As a matter of fact, the CBS contract preceded the 1982 expansion by more than a decade: 1968 began CBS’s relationship with the Sun Bowl, which continues today, nearly 50 years later.

It’s true that when the 1984 Sun Bowl between Maryland and Tennessee took place, there were only 18 bowls, making the Sun much more of a destination event in the years before the number of bowls skyrocketed. 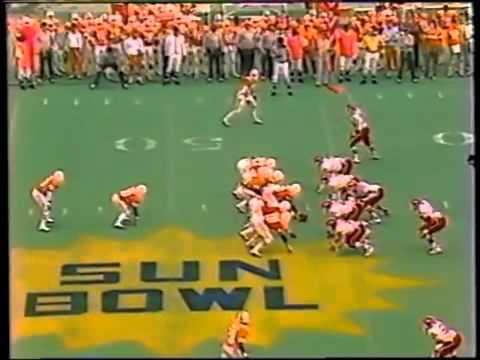 Yet, the YouTube links presented above show that even as the number of bowls has steadily climbed — past 25, then 30, then 35, and then to 38 last year — the Sun Bowl’s attendance figures have remained steady. This bowl hasn’t fallen off a cliff. It has continued to deliver results at the ticket window.

While bowls such as the Bahamas and the Potato — whose 2015 game on Tuesday sold under 19,000 tickets and produced an even smaller count through the turnstiles — are meant to get television ratings and sell ads for ESPN, the Sun Bowl has actually performed at the gate… for a long time. This is a bowl which has earned its place in the sport, unlike others.

It is and has long been my opinion that there ARE too many bowls, too many monuments to mediocrity and a generally inferior commercial product.

The Sun Bowl, on the other hand, is the bowl which has delivered, decade after decade, in an increasingly saturated marketplace. This bowl has lasted 80 years, making it the fourth-oldest active bowl behind the Rose, Sugar and Orange.

It is the kind of bowl worth preserving for another 80 years, should the sport of football last that long.

It all started with a small stadium called Kidd Field (in a separate part of the UTEP campus) and a crowd of 11,000 on the first day of 1936 for New Mexico State and Hardin-Simmons.

It continued with the new Sun Bowl Stadium, seating 30,000 upon its completion in 1963: 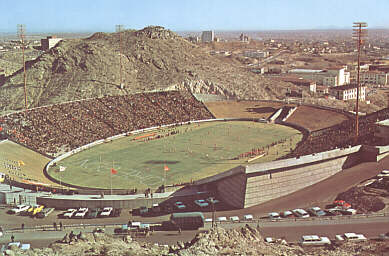 Today, the Sun Bowl is still going strong, not merely hanging on for dear life. Such a reality is one of the most remarkable American sports success stories ever witnessed.

It might not be a Christmas miracle, but it certainly has defied the odds.