1 Burning Question: Is Bob Stoops ready to guide Oklahoma back to the top?

After the Big 12 was left out of the College Football Playoff fun in the first year of the new postseason format, Oklahoma represented the conference in the second edition last season after claiming sole possession of the Big 12 crown. A matchup in the Orange Bowl against ACC champion Clemson was supposed to be a wildly entertaining game going up and down the field, but the Tigers clobbered Baker Mayfield and the Sooners in a 20-point victory to end Oklahoma’s season and championship hopes. Now, Bob Stoops is tasked with regrouping from that bitter ending and finding a way to get back to the playoff and maybe stick around a little longer.

The ingredients are right there in Stoops’ kitchen with a motivated Heisman Trophy hopeful in quarterback Baker Mayfield, a dynamic running back in Samaje Perine, and a good dose of returning starters on each side of the football. Being tabbed as the preseason favorite always adds pressure, but Oklahoma has been down this road before. The question is whether or not Stoops and the Sooners can stay out of their own way if they manage to score some early victories against two very tough opponents (Houston and Ohio State) in non-conference play. Oklahoma has now lost two straight postseason bowl games, and three of four. If Oklahoma is going to live up to the championship contending hype, Stoops must get off to an impressive start in September, and then avoid a meltdown in Big 12 play (see: Texas, 2015). 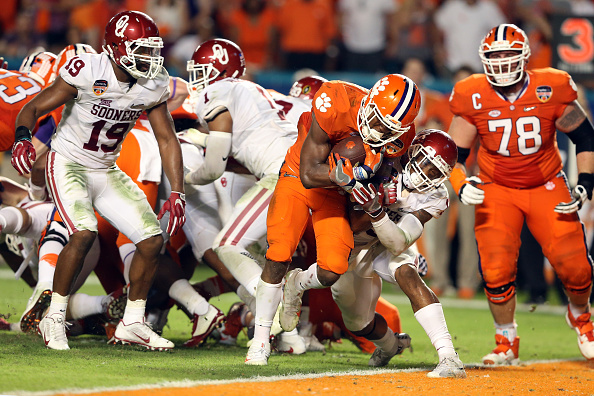 MIAMI GARDENS, FL – DECEMBER 31: Wayne Gallman #9 of the Clemson Tigers scores a touchdown in the fourth quarter against the Oklahoma Sooners during the 2015 Capital One Orange Bowl at Sun Life Stadium on December 31, 2015 in Miami Gardens, Florida. (Photo by Streeter Lecka/Getty Images)

53.49 – Percentage of the time Oklahoma’s opponents scored a touchdown once entering the red zone. More than half of the time last season, Oklahoma’s opponents managed to reach the end zone after stepping foot inside Oklahoma’s 20-yard line. Maybe that sounds bad to you, but it ranked 35th-best in the nation and it was 21st-best among teams allowing 40 or more red zone possessions. We expect the red zone success of Big 12 teams to trend a little higher than the norm anyway, so Oklahoma having the second-best red zone touchdown defensive success rate is not to be overlooked. The Sooners allowed 23 touchdowns on 43 red zone opportunities. Only West Virginia allowed fewer touchdowns on one fewer red zone situation. If you can bring a defense to a Big 12 game, you might have an advantage.

-4 – Oklahoma’s turnover margin in September last fall. You are probably asking yourself why this is a big deal. It’s not like it ended up hurting Oklahoma in the end, as the Sooners captured the Big 12 crown and reached the College Football Playoff. True, but it suggested Oklahoma could be a little sloppy at the start of the season. They could get away with that against Akron, Tulsa, and a Tennessee team that has a knack for giving games away. That may not be the case this September with games against Houston and Ohio State on the schedule before getting to October. These are teams likely to be much more capable of capitalizing on miscues by Oklahoma, if they cough up the football.

Why it matters: Simply put, this game could make or break the season for both teams. This is not the same Houston team the Sooners dismantled in their two all-time meetings by a combined score of 103-27. This Houston team is looking to start the season with a signature victory to entertain any thought of making a playoff push down the road. Houston’s offense under head coach Tom Herman has taken the Group of Five by storm and the Cougars are coming off a season that saw them top Florida State in the Peach Bowl. Houston is riding a momentum train that could be dangerous for the Sooners in the opener. A loss puts Oklahoma behind the curve for the playoff, and could cost them later if a head-to-head result with Houston enters the discussion among the selection committee members.

Why it matters: If you think playoff hopes are on the line in the opener between Oklahoma and Houston, the stakes may be slightly higher two weeks later when the Buckeyes make their first visit to Norman since 1983. With J.T. Barrett leading Urban Meyer’s offense and Ohio State, expect the Buckeyes to bring a good challenge to the Sooners. By Week 3, the Buckeyes will likely have figured out how to replace some key players from last year’s team, including at running back and on the defensive line. The Buckeyes have talent and should be OK as the season goes on. This will be a big test for Ohio State, but the Buckeyes will be physical. The winner obviously holds a leg up in the playoff race, and if the last playoff spot comes down to the Big 12 or the Big Ten, the winner of this game could determine the fate regardless if either is in the hunt at the end of the year. Conference bragging rights matter in the playoff era, and this is a big cherry on top for either conference.

Why it matters: Oklahoma’s biggest game in the Big 12 this year could be either against Baylor or Oklahoma State at home, but the game that could push the Sooners into playoff positioning or completely toss them out of the mix will be played in Morgantown. As far as the Big 12 is concerned, Oklahoma can probably afford one loss in conference play. It will not be able to survive a second. A road trip to West Virginia could prove tricky for the Sooners, who have yet to lose to the Mountaineers since WVU joined the Big 12. With Dana Holgorsen hoping to take the next step with the program, a victory against the Sooners would be pivotal. In 2014, Baylor saw an undefeated season end in Morgantown. TCU had to escape with a one-point victory. Be careful, Oklahoma. West Virginia could be ready to burn some couches.

Baker Mayfield, QB – By most accounts, Baker Mayfield enters the 2016 season as one of the more notable names in the Heisman Trophy discussion not named Fournette, McCaffrey, or Watson. Mayfield passed for 3,700 yards and 36 touchdowns last season with just seven interceptions, and he rushed for 405 yards and seven more touchdowns for good measure. Mayfield appeared to be a solid fit for Lincoln Riley’s offensive system, and that should continue this fall as well. Mayfield will look to shrug off and grow from a disappointing Orange Bowl performance against Clemson, where he was picked twice in a 37-17 defeat, although he did end his season with 311 passing yards in that game as well.

Samaje Perine, RB – It is amazing just how under the radar Samaje Perine seems to run in college football. In a year that should be great for running backs, Perine belongs in the conversation more than he seems to be invited. Perine took on the leading role of Oklahoma’s running game last season with 1,349 rushing yards and 16 touchdowns as a sophomore, a year after going off for 1,713 yards and 21 touchdowns as a freshman. Don’t forget, Perine also set the single-game rushing record with 427 yards as a freshman, barely letting Melvin Gordon enjoying his stay at the top of the record books for a week. Mayfield is the leader, but Perine is a crucial piece of the offense.

Charles Walker, DE – On the one end of Oklahoma’s defensive line will be Charles Walker, looking to improve on a season worthy of second-team All-Big 12 consideration. With a starting role now his to run with, Walker will look to build on a season with 10.0 tackles for a loss and six sacks. The rest of Oklahoma’s line should be in good shape, giving Walker a chance to establish his own footing without having to worry about making up for others next to him. Look for him to be tough to run by off the end and expect him to be a force in the backfield.

Jordan Thomas, CB – Oklahoma’s secondary should be in stable shape to start the new season, and Jordan Thomas should be one of the reasons why. Thomas was second on the team last season with five interceptions, and he has shown the ability to make something happen once he gets his hands on the football. Thomas returned his five interceptions for a total of 153 yards and one went the distance for a touchdown. If he can keep that big momentum-shifting ability going, opposing offenses would be wise to stay away from Thomas.

The last time a player in the Big 12 rushed for 1,800 yards in a season was in 2004. Fittingly enough, it was a Sooner. Adrian Peterson rushed for 1,925 yards and 15 touchdowns that season, and even more amazing is the fact two players rushed for more yards. College football has evolved more to a passing game, and Oklahoma has the tools to attack through the air at will, but Riley and Stoops should make good use of Perine on the ground and give him a chance to go for 1,800 yards this season.

Despite a more challenging schedule in front of him, Mayfield will come close to duplicating his overall production from a  year ago, but the key difference will be his production in the biggest games will be slightly more balanced. The completion percentage will stay above 50.0 percent against Ohio State and Houston and key Big 12 opponents, unlike how games against Tennessee (48.7 percent) or TCU (45.0 percent) went in 2015.

Oklahoma made a great hire by bringing in Riley to be the offensive coordinator, but his stay in Norman may not be very long. A successful season with Mayfield and Perine and one of the top offenses in the Big 12 will make Riley one of the trendy names in the next round on the coaching carousel. That means Stoops will be on the lookout for a new offensive coordinator as well. If Texas A&M (Kevin Sumlin) or Indiana (Kevin Wilson) make any coaching changes, could they return to be a part of Stoops’ staff?

2. Sooners slip up against Ohio State

It looks as though Oklahoma is getting Ohio State at the most ideal point in the season, other than the opener. With Ohio State still looking to plug a few holes and having to go on the road to play a very talented Oklahoma team, the Buckeyes should be an underdog. But, Ohio State has put together some deep recruiting classes since Urban Meyer’s hiring in Columbus and Meyer and his staff know how to prepare for a big game. J.T. Barrett will make just enough plays to out-duel Mayfield in a mid-September Heisman Trophy showcase game, and the Buckeyes will score a major victory for the Big Ten.

1. Oklahoma runs the table in the Big 12

There are some tricky spots for the Sooners once they get into conference play, and going undefeated will not come easily. Not with a healthy Baylor still capable of doing some damage. Not with Texas likely to improve a little bit more under Charlie Strong. Not with a road trip to West Virginia and not with a possible shootout with Texas Tech. What is known for sure is Oklahoma will be the most battle-tested Big 12 team entering conference play after going through games with Houston and Ohio State, and that could bode well for them, even if those September games do not go well for them.