Despite these losses, there are still a number of reasons to be optimistic about the offense this season. Led by second-team All-Pac 12 performer J.J. Dielman, the offensive line returns five players who started seven or more games last year. The running backs will be solid, if not spectacular, with Joe Williams (477 yards) and Troy McCormick (178 yards, 5.9 ypc in 2014) expected to lead the way this fall. At receiver, the Utes welcome back Harrison Handley (21 catches, 286 yards, 4 TDs), Tyrone Smith (18 catches, 193 yards), and Siale Fakailoatonga (12 catches, 120 yards in 6 games), who all played well in limited opportunities last season. In addition, Corey Butler-Byrd and Caleb Repp will both have a more active role in the passing game this fall.

Speaking of the passing game, the Utes are actually in better shape at the quarterback position than most people realize. Veteran Brandon Cox has three years of experience in Utah’s system and played extremely well in the first two scrimmages this spring. Washington transfer Troy Williams started two games for the Huskies in 2014, and would give the Utes a signal caller with Pac-12 game experience. Freshman Tyler Huntley will also be in the mix for playing time after turning in a strong performance in the spring game (17-of-26 for 233 yards).

In other words: there’s not a “bad” option under center.

34 – The number of turnovers that the Utah defense produced last year, the second-best total in the country. The Ute D was one of the best units in the nation when it came to forcing turnovers last year, recovering 12 fumbles and intercepting 22 passes. This trend must continue this season if the Utes are going to make any kind of noise in the Pac-12. After all, the Utes were 8-0 when they had a positive turnover ratio, and 2-3 when they didn’t.

82 – The number of completions that went for more than 10 yards, which ranked 110th nationally. Although Utah’s passing game was pretty efficient (63.6% completions), it didn’t produce a lot of big plays, with only 82 of its 224 completions netting more than 10 yards. This lack of explosiveness was particularly troubling on third down and long (10+ yards), as only 2 of Utah’s 29 pass attempts resulted in a first down. If the Utes are going to be successful on offense this year, it must produce more big plays in the passing game, to prevent opposing defenses from loading the box to stop the run.

Why it Matters: I would argue that the Holy War is the most intense rivalry in college football. Although it doesn’t go back as long as some of the other great rivalry games (first meeting was in 1922), this contest divides family and friends all year long. Utah has had the upper hand in this series recently, winning the last five meetings. The Cougars will come into this game eager to avenge last season’s loss, and prove that they belong in the NY6 Bowl discussion.

Why it Matters: Even though the Pac-12 media picked UCLA to win the division, I still think that the Trojans are the team to beat in the South. USC was playing as well as anyone at the end of the regular season, closing it out by winning five of its final six contests and earning a spot in the Pac-12 title game. With 15 starters returning from that squad — including nine on offense — the Trojans will be every bit as tough as they were last season. That makes this contest a “must win” game if the Utes are going to win the division.

Why it Matters:  Some will argue that the UCLA game belongs here rather than Oregon. I disagree. Even with a “W” against the Bruins, a loss against the Ducks would be just enough to knock the Utes out of contention for the division title. Although some predict that Oregon is going to take a step back this year, it’s worth noting that the team returns six starters on offense from a talented unit that ranked fifth nationally in yards per game last season (538.2). Given that Utah absolutely humiliated the Ducks inside the friendly confines of Autzen Stadium last year, you can expect them to come out with a little extra fire in this season’s game. 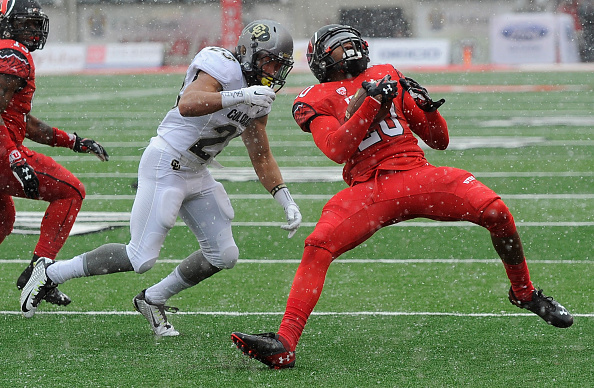 Marcus Williams, S – A ballhawk with a knack for making plays, Williams earned first-team All-Pac 12 honors last year. He was arguably the best defensive back in the country early in the season, recording four picks in the first five games. He also did a great job in run support when needed, finishing third on the team with 66 tackles. He’ll team up with Dominique Hatfield, Reginald Porter, and Justin Thomas to form one of the most formidable secondaries in the nation.

Kylie Fitts, DE – Fitts was Utah’s top pass rusher last season. He finished fourth in the Pac-12 in sacks (7.0) and led the league in forced fumbles (4). On those rare occasions when Fitts didn’t get to the quarterback, he still managed to disrupt the passing game by knocking the ball down, ranking fourth in the conference in passes defensed. He’ll be the Utes top rusher again this season, besting the stellar numbers he put up a year ago.

Caleb Repp, WR – As noted earlier in the preview, the Utes need more explosiveness in the passing game. Repp will provide that. He played well in very limited opportunities last year, catching two passes for 25 yards and two TDs in last year’s 62-20 route of Oregon. He was also the star of the spring game, catching five passes for 96 yards and a touchdown. Expect him to lead Utah in receptions this fall.

Brandon Cox / Troy Williams / Tyler Huntley, QB  – If the Utes are going to compete for the Pac-12 title, they must improve in the passing game. As mentioned earlier, Utah’s passing game was efficient (63.6% completion percentage) last year, but it lacked explosiveness. Of the offense’s 224 completions last year, only 82 netted more than 10 yards (110th in the country). Whoever steps into this role will need to be able to stretch the field vertically to prevent opposing defenses from loading the box to stop the run. Judging by the numbers in the scrimmages this spring, Utah appears to be in good hands… regardless of who ultimately takes over under center.

This one probably isn’t that big of a stretch. After all, Fitts was one of the most disruptive defensive lineman in the league last year, ranking in the top 5 in the Pac-12 in sacks, passes defensed, and forced fumbles. Yet, despite these awesome numbers, he didn’t even receive honorable mention all-conference honors in 2015. That will change this fall as Fitts has another monster season.

Although Brandon Cox knows the system the better than the other contenders, Williams will earn the starting job this fall. Sure, he missed part of spring practice with an injury, but according to Coach Whittingham, Williams was the best quarterback of the three until he got hurt. In addition, he’s the only signal caller on the roster with significant playing time under center, having started two games for Washington in 2014. Since there’s no substitute for live game experience, he’ll nudge out Cox and Huntley by a razor-thin margin.

3. The Utes won’t suffer any drop off in production at linebacker.

Despite losing All-Pac 12 performers Gionni Paul and Jared Norris, Utah will still get plenty of production at linebacker this season. The Ute defensive line is so tough on the interior that it will command double teams up front, which will free up the linebackers to make plays. Don’t be surprised if Sunia Tauteoli — who emerged as the “clear cut” No. 1 linebacker in spring practice — leads the conference in tackles this year.

That’s right, the Utes will beat the team that the media picked to win the South Division this fall. Utah well played enough to beat the Bruins last season, but came up just short thanks to a pair of costly fumbles. However, the Ute offense will be much more explosive than it was last year, which will be the difference in this contest. Look for Utah to score to at least 30 points in this contest, earning its second straight win in Pasadena.

Led by a solid defense and much improved offense, Utah will have another strong season in the Pac-12 South. If — and it’s a big if — the Utes can get past USC on Sept. 23, they could be headed for their biggest season since 2008, when they went undefeated and throttled Alabama in the Sugar Bowl. Regardless, I think they’ll win 10 games for the second straight year.