On Dec. 1, 2014, Nebraska axed head coach Bo Pelini, who accumulated a 66-27 record from 2008-14. Additionally, Pelini won at least nine contests in each of those campaigns, including three 10-win seasons (2009, 2010, 2014). Considering that the only blemish on his resume appeared under the bowl games’ category — a mediocre .500 record (3-3) — the athletic department needed to bring in a well-respected individual, accompanied by indisputable postseason success, right?

Looking back at his inaugural campaign in Lincoln, Nebraska, Riley faced numerous bumps and bruises, as the Cornhuskers’ first five losses were by a combined 13 points. The most gut-wrenching defeat came in Week 1, allowing a Hail Mary to BYU in the closing seconds.

This fall, Nebraska must atone for its woes of 2015, with Riley’s offensive arsenal leading the way. At quarterback, Tommy Armstrong is coming off a 3,330-yard campaign, where he tossed 22 touchdowns but also threw 16 interceptions, the second-highest total in the nation. Nevertheless, he’s surrounded by a very athletic receiving core once again, led by Jordan Westerkamp, who posted 918 yards and seven touchdowns last season.

In the backfield, offensive coordinator Danny Langsdorf diced up the carries, with five players getting at least 38 touches. Senior Terrell Newby paced the bunch, taking in 147 of them for 765 yards and six touchdowns.

Defensively, Nebraska displayed one of the top run-stopping units in the country, yielding just 109.8 yards per contest (ninth in Division I). Even as a safety, senior Nate Gerry exhibited a knack for making plays at the line of scrimmage, collecting the most tackles (79) among his coworkers. With the addition of defensive line coach John Parrella — who was an All-Big 8 defensive tackle at the school — the group could still improve in ’16. However, Parrella will have to overcome the loss of defensive tackles Maliek Collins and Vincent Valentine.

290.5 — The number of passing yards Nebraska gave up per game last season, which ranked 122nd nationally. Although their run defense was stout, the Cornhuskers’ pass coverage struggled all season. Against Purdue — which ranked 90th among FBS schools in passing yards and finished with a 2-10 mark — the team surrendered a 274-yard, four-touchdown performance to David Blough, who threw just ten touchdowns all season.

If defensive coordinator Mark Banker is going to turn things around this fall, he needs the entire secondary to step up. Fortunately, Gerry (4 INT, 7 pbu) and junior cornerback Joshua Kalu (3 INT, 7 pbu) return this fall, giving the Huskers a much-needed veteran presence in the defensive backfield. However, Nebraska needs for a couple of new starters to make an impact if the pass defense is going to improve this season.

5.51 — The Cornhuskers’ average yards per carry in their wins (No. 28 in Division I). When Nebraska controlled the clock, its ground game would leave an unhealable bruise upon the opposition. In the victory over UCLA, the “Big Red” ran the ball 62 times — encompassed by the 152 rushing yards in the third quarter — as opposed to 19 passes from Armstrong. He and tailback Devine Ozigbo fused together for 152 yards (5.2 ypc) and a touchdown.

Yet, in losses, Riley’s running backs found much less space to operate with, averaging only 3.91 yards a carry. On top of that, the offensive line lost three of its starters, putting extra onus on the signal caller to show his creativity, possibly through utilizing the read option. Whether or not Armstrong can routinely overwhelm defenses will play a huge role in Nebraska’s ability to quickly move the ball down the field.

Why it matters: After a 30-year drought, the schools finally square off again in what could be a war of two teams ranked in the AP Top 25. The matchup easily represents Nebraska’s toughest non-conference game and a chance to judge if its phenomenal run defense carries over, facing one of the best running backs in Division I. Royce Freeman placed fourth in the nation in rushing yards (1,836) a campaign ago, along with 17 touchdowns. A victory for the Cornhuskers would put plenty of fear into the eyes of their conference foes.

Why it matters: Ironically, the previous two times that Nebraska and Ohio State tangoed (2011-12), the Huskers marched to the Capital One Bowl — now labeled the Buffalo Wild Wings Citrus Bowl — each season. For Nebraska to qualify for a third trip to Orlando, Florida, or another significant location, part of their ticket requires them to slow down Buckeyes’ quarterback J.T. Barrett.

While he battled back and forth with Cardale Jones for the starting nod throughout 2015, Barrett demonstrated why he’s now a Heisman Trophy candidate. In his final two games last year, he amassed 559 total yards and five touchdowns versus Michigan and Notre Dame. Edge rushers, such as senior Greg McMullen — who recorded four sacks last year — must attempt to keep him inside the pocket on every down.

Why it matters: In order to reach the top of the Big Ten West standings, the Cornhuskers need to prove they can knock off the defending champion. Nebraska hung around in the regular-season finale against Iowa in ’15, but Armstrong’s four interceptions proved too costly for his teammates to overcome. Even though the Hawkeyes’ passing game was very mediocre (No. 89 in Division I) — averaging 204.4 yards per contest — Banker’s inconsistent unit shut them down, allowing quarterback C.J. Beathard to throw for just 89 yards and produce a quarterback rating of 34.2. Were Riley’s signal caller to find a rhythm this time around, his group could prevail at Kinnick Stadium. 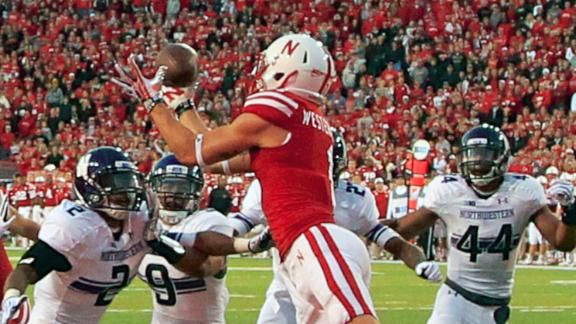 Jordan Westerkamp, WR — Following a campaign that saw him average 70.6 yards per game, the 6-foot, 195-pounder is listed as the No. 1 wideout heading into this season on Pro Football Focus. In ’15, Westerkamp collected a 52-percent deep ball catch rate, ranking fourth among returning receivers. Against Michigan State, the-then junior displayed his dominance, accumulating nine catches for 143 yards (15.9 ypc) and a touchdown. If he can improve an already-solid 14.1 yards per reception, his ceiling is roofless.

Nate Gerry, S — The 6-foot-2, 205-pounder was the centerpiece of Nebraska’s defense a season ago, especially versus Michigan State. In the Cornhuskers’ upset win, Gerry recorded a season-high 14 tackles, as well as tallying an interception. If the senior continues to develop as a ball hawk and elevates the surrounding talent around him in the secondary, too, he’ll play a major role in keeping the opponents off the scoreboard less often than the last campaign, where opponents scored at least 28 points six times.

Tommy Armstrong Jr., QB — Although a turnaround from Nebraska’s pass defense is vital in ’16, it’s imperative that the 6-foot-1, 220-pound pigskin tosser cuts down on his turnovers. Over the last three seasons, Armstrong has thrown 36 interceptions.

Entering another year with an elite receiving core, the senior’s accuracy couldn’t be closer to a microscope, stringing together a 55.2-percent completion rate. Still, his playmaking ability shouldn’t be questioned, rushing for 400 yards and seven touchdowns in ’15 (4.1 ypc).

Sam Foltz, P — Yes, a punter actually deserves to make this list. Foltz placed No. 21 among Division I at his position, averaging 44.23 yards per punt a campaign ago. The 6-foot-1, 201-pounder consistently aided his defense, pinning opposing offenses deep in their own territory. If the Cornhuskers continue to struggle with turnovers — they ranked No. 117 among FBS schools in turnover margin (-12) — and can’t make strides versus the pass, they’ll lean on him yet again.

Coming into 2016 as the No. 1 safety in the Big Ten, Gerry compiled five games with at least six tackles, proving his prowess for frustrating opposing offenses. Three years ago, the South Dakota native was one of the top sprinters in the state, illustrating his capability of concocting additional turnovers this season.

Last season, the budding star was fifth in the Big Ten in this category. However, with two of the receivers ahead of him departing for the NFL (Aaron Burbidge and Alex Erickson) and other two losing their starting quarterbacks at Penn State and Indiana, respectively, (Chris Goodwin and Simmie Cobbs, Jr.) Westerkamp will ascend to the top spot on the list.

3. The Cornhuskers defeat the Ducks.

A huge statement will be made at Memorial Stadium. Nebraska’s crème de la crème rushing defense slows down Oregon’s tailback, and Armstrong takes advantage of the No. 126-ranked passing defense from a year ago. This win should put the Riley’s team on the watch-list of many college football analysts, giving them reason to believe that Nebraska has a shot to compete for the Big Ten West title.

2. Nebraska is a top-20 scoring offense in the nation.

In 2015, the Cornhuskers produced 32.8 points per contest, good for No. 43 in the country. Arizona ranked No. 20, scoring 37.4 points each game. Assuming that Armstrong transforms into a more shrewd decision-maker, his team should make a jump to at least this position.

The defense’s inability to vastly improve against passing attacks will ultimately hold Armstrong and the offense back from making a big jump in the win column. Yet, Riley should survive the hot seat, heading into 2017.