1 Burning Question: Will Texas win enough this season to save Charlie Strong’s job?

For the record, I really don’t like asking this question. Charlie Strong is an outstanding coach with a proven track record of doing things the right way. He’d be the perfect person to lead any program. There’s no doubt in my mind that he will turn things around at Texas if given enough time.

Unfortunately, time isn’t a luxury that Strong has right now. After suffering through consecutive losing seasons for the first time since 1988-89, Longhorn boosters aren’t interested in rebuilding. They want to win, and they want to win right now.

There are plenty of reasons to think so. Sure, Texas lost seven games last year, but the win-loss record fails to tell the whole story. The fact of the matter is that the Longhorns were a couple of special teams gaffes away from finishing 7-5. They also beat Oklahoma and Baylor — which both finished in the Top 15 in the final coaches poll — suggesting that when the ‘Horns bring their “A” game, they can beat anybody.

Texas returns 14 starters from that much-better-than-it-looked-on paper team from last year. Quarterbacks Jerrod Heard (57.9%, 1,215 yards passing, 556 yards rushing) and Tyrone Swoopes (537 yards passing, 451 yards rushing) are back, and they’ll be joined by freshman Shane Buechele, who threw for 299 yards in the spring game. They’ll throw to an effective receiving corps that welcomes back John Burt (28 catches, 457 yards) and Armanti Foreman (11 catches, 182 yards), who each shined in limited opportunities last year. The running game is in great shape with running backs D’Onta Foreman (681 yards, 7.17 ypc) and Chris Warren III (470 yards, 6.62 ypc) expected to lead the way. With four players with starting experience coming back – led by two-year starter Kent Perkins – those rushing numbers will continue to improve this fall.

The Longhorns are just as solid defensively. There’s plenty of depth on the defensive line with Naashon Hughes (9.0 TFL, 5.5 sacks), Paul Boyette Jr. (8.0 TFL, 3 sacks), Bryce Cottrell (6.5 TFL, 4 sacks), and Poona Ford (6 TFL, 2.5 sacks) returning. Freshman All-American Malik Jefferson (61 tackles, 7 TFL) will anchor a mostly young, but very talented group of linebackers, which might be one of the best units in the conference this year. In the secondary, UT welcomes back most of its two-deep from last season, including Dylan Haines (5 INT, 3 PBU), Jason Hall (2 INT, 2 pbu), DeShon Elliot (2 INT, 1 pbu), and Davante Davis (7 pbu, 1 INT).

33 – The number of sacks that Texas recorded in Big 12 play last year, tops in the conference. The Longhorn pass rush was arguably one of the best in the nation over the second half of the season. After an embarrassing loss to TCU in Week 5, UT’s front seven was virtually unstoppable, recording 30 sacks over the final seven games. The team needs for this trend to continue in 2016, since they’ll face six teams that finished in the top 25 in passing offense last year. After all, it’s tough to complete a pass if you’re sitting in the grass.

219 – The average number of rushing yards per game that the Longhorns allowed in 2015. This number is actually much higher when you factor in all of the sacks that UT recorded last year. Aside from two stellar outings against Oklahoma (67 yards, 1.8 ypc) and Oklahoma State (103 yards, 2.2 ypc), Texas couldn’t stop anyone from running the ball, especially in the last three weeks of the season as West Virginia, Texas Tech, and Baylor combined to run for 945 yards with a whopping 5.6 yards per carry. This number definitely needs to improve for the Longhorns to be successful in 2016. UT is 2-9 under Strong when it allows more than 200 yards rushing.

Why it Matters: With Charlie Strong’s job on the line, it’s imperative that Texas open the season on a positive note. The Fighting Irish absolutely embarrassed the Longhorns last year, holding them to just 163 yards and eight first downs. If UT is going to turn things around this year, it needs to make a statement in this game. Should Notre Dame win this game convincingly, rumors about Strong’s job status will start to swirl, which could be a distraction as the team prepares for crucial contests against California and Oklahoma State.

The Red River Rivalry is arguably the best rivalry game in college football, dating back all the way to 1902. The defending Big 12 champion Sooners will come into this contest fired up and ready to play, eager to avenge last season’s shocking loss to the Longhorns. A victory in this contest would not only quiet Coach Strong’s critics for a few weeks, it would also give Texas a huge momentum boost heading into the more manageable part of its schedule.

Why it Matters: The Horned Frogs have blown out the Longhorns in each of the last two seasons, outscoring them by a total of 98-17. That’s not acceptable to the UT brass against anyone, let alone another school from the state of Texas. Expect to see a spirited performance out of the ‘Horns in the contest since Charlie Strong’s future may depend on the outcome. To say that it’s a “must win” game is an understatement. 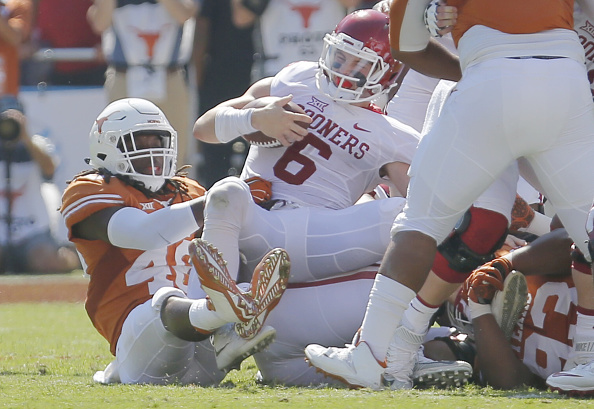 Malik Jefferson, LB — There’s a reason that Jefferson was named the Big 12’s preseason Defensive Player of the Year by the media; this guy can flat-out play. A Freshman All-American last year, Jefferson did a little bit of everything for the Longhorns, recording 61 tackles, 7 TFL, 2.5 sacks, 3 pbu, 1 forced fumble, and a fumble recovery for a touchdown. He’ll be the leader of this defense, and will be instrumental in helping the UT “D” improve against the run.

John Burt, WR — Although the Longhorns didn’t throw the ball much last season, Burt was still a huge part of the offense. He was UT’s most dangerous receiver last year, catching 28 passes for a team-best 457 yards and two touchdowns. Judging by his performance in the Orange and White game (2 catches for 106 yards and a touchdown), he should have no trouble adjusting to the spread offense. Expect him to lead the ‘Horns in receiving yards for the second straight year.

Dylan Haines, S — A former walk-on, Haines was one of the top performers in the Longhorn secondary last season. He excelled in coverage last year, leading the team in both interceptions (5) and passes defensed (8). In addition, he was solid in run support, recording 47 tackles and 3 TFL. He’ll team with preseason All-Big 12 selection Devante Davis (1 INT, 7 pbu), Jason Hall (2 INT, 2 pbu), DeShon Elliot (2 INT, 1 pbu) and Holton Hill (1 INT, 4 pbu) to form what should be one of the better secondaries in the Big 12.

Jerrod Heard / Tyrone Swoopes / Shane Buechele, QB — While no one knows who the quarterback will be this fall, everyone knows how important he will be to the team. Unlike seasons past — where the Longhorns relied primarily on the run — this year’s team will utilize a more balanced approach. There’s no way to do that without outstanding play under center. If the new starter can get the UT passing game going, it should open up things for the ground game – which averaged 5.1 yards per carry last season when opposing defenses didn’t have to worry about the threat of a passing game. An improved aerial attack should open up things even more.

5. The run defense will improve… dramatically.

This probably isn’t that big of a stretch. The Longhorn defense struggled against the run last season, allowing eight opponents to rush for more than 200 yards. However, there’s simply too much talent on this roster for Texas not to improve against the run this season. Look for the ‘Horns run defense to improve by at least a half yard per carry in 2015.

4. The offensive output will improve by at least 100 yards per game

Again, not that bold of a prediction. Texas relied heavily on the run last year (529 runs, 252 passes), which resulted in fewer plays and less yardage. With Gilbert’s up-tempo attack — which averaged 1,093 plays in two seasons as co-coordinator — the Longhorns will run far more plays, which will keep opposing defenses on their heels. Judging by Tulsa’s performance against Oklahoma last year — in which the Sooners gave up season highs in both yardage (603) and points (38) — Texas has to feel optimistic about its offensive scheme heading into 2016.

As noted earlier in the preview, the Horned Frogs have won the last two meetings in this series by a combined scored of 98-17. That will change this year. While last season’s contest wasn’t even close, it’s worth noting that Texas was a completely different team after that crushing defeat. UT proceeded to win four of its next seven games, including a “W” over eventual Big 12 champion Oklahoma. With another year of seasoning on defense and a much more explosive offense, the Longhorns will close out the 2016 regular season with a victory.

Yes, I know that last year’s game was a blowout. However, Notre Dame only returns 10 starters from that squad, and loses a ton of key players on both lines. The Longhorns will control both lines of scrimmage and start off the 2016 season on a positive note.

1. Charlie Strong will remain the head coach at Texas

After the Longhorns finished with back-to-back losing records for the first time since 1988-89, many didn’t think Strong would be the head coach in Austin this season. Coach Strong will reward the school for its loyalty by finishing near the top of the conference this season, thanks to an explosive offense and improved run defense. I wouldn’t be surprise if Strong, like David McWilliams — who was the last UT head coach to finish with back-to-back losing records — responds by leading the ‘Horns to a 10-win season.